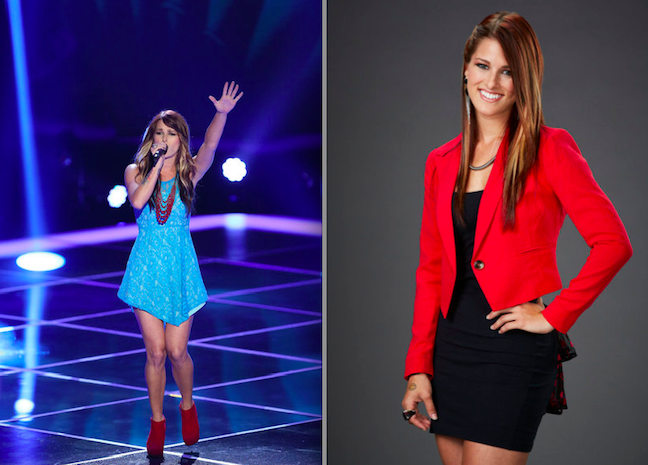 "The Voice": Pictured at the "Blind Auditions" and backstage is Cassadee Pope. (photos by Tyler Golden and Paul Drinkwater/NBC)

Dia Frampton and Juliet Simms left well-known bands to try their hand as solo artists on NBC's "The Voice." They did this to take the next step in their line of work and prove their musical mettle.

Though both finished in the runner-up slot, there's no doubt the exposure they received has bolstered their careers in everything from touring to record sales to industry acclaim. Dia signed a record contract with Universal Republic Records (official label of "The Voice"), and toured with her coach, Blake Shelton, while Juliet is currently writing songs for a new album and working with top-tier producers.

Cassadee Pope is looking to follow in Dia's and Juliet's footsteps this season on "The Voice."

At the age of 18, she formed the band Hey Monday. Cassadee and co. were signed to Decaydance and Columbia Records and toured with Fall Out Boy. The band performed on the Warped Tour and appeared on "Jimmy Kimmel Live."

"We're on a hiatus," she told BTS. "That's, we don't want to say we've broke up, because we didn't know if down the road we would ever get back together and do more stuff. So we're all doing our own things right now."

On "The Voice," Cassadee's performance of "Torn" resulted in chair turns from all four coaches. She ultimately chose Blake.

As she moves forward in the competition, Cassadee knows her fans will support her, but she realizes it will take more than that to win "The Voice."

"I definitely think that going on tour and performing a lot has really helped me, but the same could be said about anyone else that's ever played any shows or anything like that," she said. "Amanda has been on some huge tours, so she definitely has had probably more experience than I've had on stage.

"But I do feel a lot of love from the fans that I've already made and it makes me feel a little more confident and a little more fearless when I'm going into such a weird -- like it's just not something that I've experienced before. Especially like a competition setting. Because tours are definitely not like that. But it's cool and I think, compared to the actual audience that watched 'The Voice,' my fanbase is probably not even 10 percent of that number so I'm not -- I feel great about it, and I feel like lucky to have them. But I also know that it's also a very small amount compared to the big picture."

Cassadee said it's "definitely inspiring to see Dia and Juliet come out the way they did. And also Jesse (aka Charlotte Sometimes), she did pretty well, too."

She knows "The Voice" is a golden opportunity to reach new fans.

"It's a platform that we didn't get otherwise," Cassadee said. "As much as we were, we accumulated fanbases and had opportunities that some people weren't able to get, this is definitely the biggest thing that any of us have ever been able to be a part of."