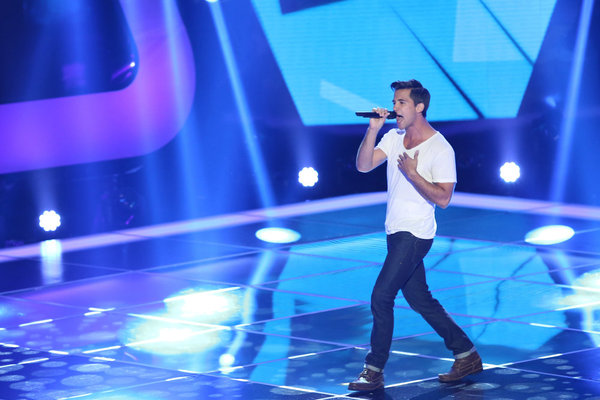 "The Voice": Pictured at the "Blind Auditions" is singer Dez Duron. (photo by Tyler Golden/NBC)

'The Voice': Welcome back, Dez Duron

How many times have we seen dejected, rejected singers on reality television vow we haven't seen the last of them?

The sad truth is, those performers rarely return to our living rooms. When they do, it's usually in a manner in which the show can remind us why said singers are not (and will never be) music stars. These singers, then, often depart with a tirade, and that's that.

Dez Duron is the exception to this rule.

After the 22-year-old Louisiana native failed to receive any "I Want You" button pushes on season two of "The Voice," he didn't make any outlandish claims nor did he leave huffing and puffing. Instead, he hired both a vocal coach and a guitar coach. Moreover, Dez learned how to channel his gospel roots into a more universal pop style.

"I just wanted to become the best artist that I could be," he said. "It was about more than just coming back on the show. It was about becoming a better artist in general, just in life getting better."

Dez wasn't immediately sold on returning to "The Voice."

"Actually it wasn't my intent right after I got cut," he said. "I got to admit, I was pretty down right after it didn't happen for me. And I couldn't really, you know, I'm not one to make excuses. You know, it's my fault I didn't sing it good enough to make them hit their buttons. I felt like I did a pretty good job; it was just really hard for me to take. And I definitely didn't want to be that guy who didn't make it twice on 'The Voice.'

When Dez returned for season three of "The Voice," he netted three chair turns -- and a heated battle for his services -- from coaches CeeLo Green, Christina Aguilera and Blake Shelton.

"It's a completely different world," he told BTS. "I mean, I was talking to my dad last night. It feels a lot better this time getting congratulations tweets. Rather than like, 'Keep your head up' tweets.

"So it's done a lot for my confidence to have, especially to have CeeLo Green compliment my run. Or any of those coaches say, being nice to me. Those are by far my favorite vocalists. So to have three chairs to turn around was more than I ever expected. I just wanted somebody to turn around, so I feel very blessed and I'm just glad to have my confidence back."