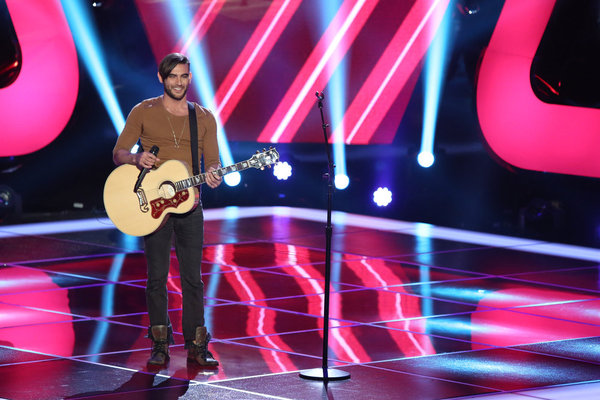 "The Voice": Diego Val is shown performing at the blind auditions. (photo by Tyler Golden/NBC)

'The Voice': Diego Val shares his talent with hospitalized children

"I want to use music to help others."

Such has been the mantra of many a singer on this season of "The Voice."

To their credit, these performers have pledged to help others upon winning NBC's vocal competition.

But one standout is already using his talent to brighten the lives of others. Win, lose or draw, Diego Val isn't waiting for fame or fortune to share his gifts with those in need of a friend.

"For me it's -- I just want to give back," he told BTS. "I spent so much time in the hospital when I was a kid, and I remember feeling lonely. And it just sucked, man. You know, it really sucked to be that kid that was sick and nobody would pay attention to you, and I was just a (pariah) for all my friends. No one would even look at me because of the way I looked, or because of what I had."

Diego had perthes, a degenerative hip bone disease that kept him isolated in a Peruvian hospital. While he was there, he relied on music to keep up his spirits.

It was a lonely time for Diego. But he ultimately left the hospital and overcame perthes. He regained his ability to walk, and he learned how to sing and play guitar.

Now, once he was free, you'd think a health care facility would be the last place Diego would want to revisit. Yet, that's exactly where he went. Diego joined Musicians on Call, a group that brings live music to patients' bedsides.

"But it's not something I can do every day or every week. I try to do it at least once a month, and I always give a shout-out to the people that work at hospitals during this. Because it's probably one of the hardest things I've done in my life, to be honest with you."

It's not easy for Diego to visit these children, but he does it because he's realized there's truth in the old saying, "It's better to give than receive."

"To go back and spend time with these kids, it's -- I don't even do it to fulfill my happiness, because it's not about me. I do it because I know they need it and I know that God gave me a gift to sing and to perform," Diego said. "And I've done studies, when it comes to music. What music can do for kids and for people that are ill. And it's just beautiful to spend time with kids who actually appreciate that."