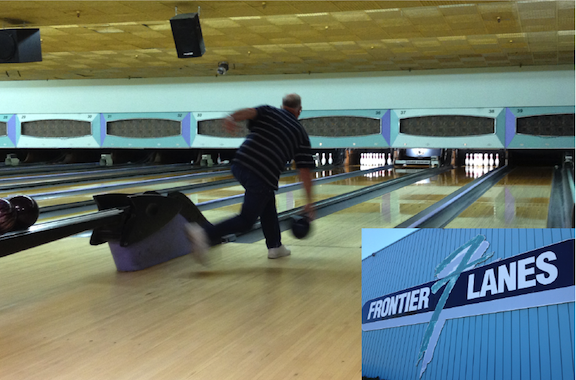 Game on: Frontier Lanes reopens in Village of Lewiston

Lewiston was abuzz with a different type of balls and strikes Monday as Frontier Lanes, the village's 54-year bowling alley, reopened for business.

Frontier Lanes had been closed since April due, in part, to a pending deal to purchase the building at 845 Cayuga St., but mostly because the bowling alley normally shuts down in the summer (giving way to the national pastime, and the other balls and strikes).

Frontier Lanes is now up and running for fall, and has openings in its leagues. Interested bowlers can sign up for the next two weeks. Younger rollers can register for the junior bowling program ("tots to teens"), which begins Sept. 22. The bowling alley also is available for fundraisers, charity events, group functions, holiday and birthday parties.

Gwin made a hand motion to indicate the burger is about the size of a bowling ball and said, "It's really good."

Frontier Lanes is currently looking to hire workers, including a food and beverage manager. For more information, call 716-754-8248.

"We want to focus on customer service," Gwin said. "That's the big thing for us."

While bowling has resumed, Frontier Lanes is still for sale.

"We thought the business was sold," Gwin said. "We were working with a buyer during the course of the last year, but eventually the sale fell apart."

The Gwin family, which owns the business, would prefer it remain a bowling alley, but will listen to other offers.