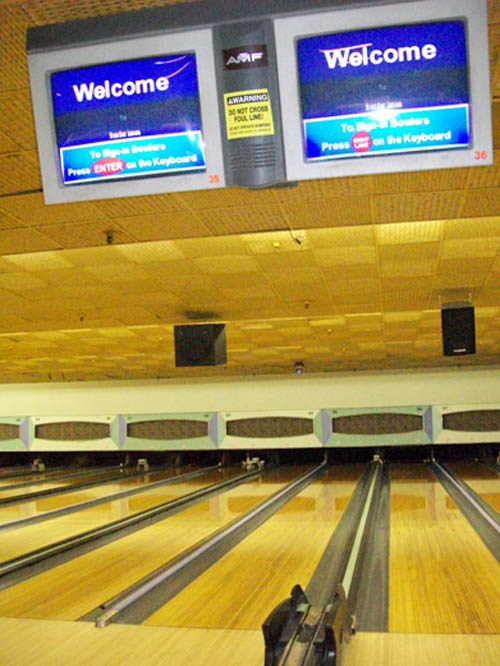 Following April's violent storms, Frontier Lanes started to topple in much the same way pins fall on its bowling lanes. A third of the roof separated; the building's membrane lifted; steel fell off; signs blew down.

"We were beat up by the storm," owner Dana Gwin said Monday. Exterior and interior damage "ended our season early - by about six or seven weeks."

Insurance issues, he said, kept Frontier Lanes closed for the summer. However, the majority of repairs are now in place, and bowling has resumed. The alley reopened last weekend.

"Leagues are starting and there's room for more league bowlers just about every night of the week," Gwin said.

To welcome patrons back - and bolster the spirits of cash-strapped visitors - Gwin has launched the "Frontier Lanes Stimulus Package." The September program offers $1.50 bowling sessions and $1 shoe rentals Monday, Tuesday and Thursday through Saturday.

"(We're doing this) because the economy is really bad," Gwin said. "It could help get more people in and probably offer the best family value in the area."

The "stimulus package" is an offshoot of Frontier Lanes' $1 Sunday special ($1 bowling, pizza slices and beer), which Gwin has previously run with great success.

"It ends up being a huge family day," Assistant Manager Rob Samborek said. The 19-year alley cat said it's no surprise to see 40 lanes in operation and a wait list of people looking to bowl on Sundays. "This place is just rocking."

Now, as pumped as Gwin and Samborek are about bowling, they're even more excited about Frontier Lanes' food offerings.

"We have about the best casual food in the area," Gwin said, as he began to rattle off the menu items exclusive to his snack bar. Frontier Lanes offers what he calls "The Manhandler," a 5-pound bacon cheeseburger that feeds between six and eight people ($35).

"We did a few of those last year," Gwin said. The burger consists of 3.5-pounds of ground beef, a pound of bacon and another pound of cheese. When cooked, the 5-pound "Manhandler" is served on DiCamillo's Armenian bread.

In the spirit of ever-popular food competitions, if any one person finishes the burger and a side of fries (within a to-be-determined period of time), that gourmand will receive his meal for free and win a T-shirt Gwin's daughter is set to design.

Gwin said he offers "the best tacos and enchiladas in town (between $6 and $7), and Samborek added, "Our pizza kills anyone in Lewiston. Hands down."

When told that's a bold statement, he said, "I'll challenge any pizzeria in town."

One pie Gwin is especially proud of is the bacon-chicken pizza alfredo ($15 for a 1/2 tray or large pie).

"The best pizza on the planet," Gwin said.

He's also tried his hand at alligator wings, or what he calls "swamp chicken."

"I had great fun with alligator last year," Gwin said. The Mississippi native orders the specialty wings from CajunGrocer.com. "I can go authentic with my Cajun."

Gwin recently began applying the "Buffalo wing" concept to ... well, just about anything he can find.

"We have fun with food," Gwin said.

Frontier Lanes is located at 845 Cayuga St. Its hours of operation are fluctuating as Gwin and co. get back into the swing of things. Open bowling hours this weekend are Saturday from 10 a.m. until midnight, and noon until 10 p.m. on Sunday.

The alley is open to the general public every day except Wednesday. For more information, call 754-8248.