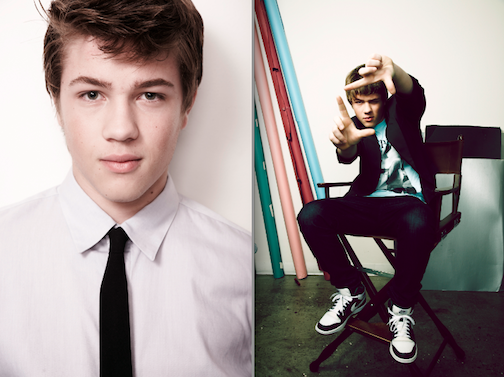 Connor Jessup: Toronto actor making a name for himself on 'Falling Skies'

For years, we've known Toronto is the regional epicenter for entertainment. Thanks to radio stations such as 102.1 "The Edge," and 97.7 HTZ-FM, Western New York has grown to love Canadian bands like Our Lady Peace, Sam Roberts, Finger Eleven, Sloan and Econoline Crush. Some of our favorite television shows are filmed in Toronto, too, including "Covert Affairs" and "Warehouse 13."

It's no surprise, then, that some of Hollywood's top, up-and-coming talents were born in Toronto. Patrick J. Adams of "Suits," Laura Vandervoort of "Smallville," Shenae Grimes of "90210," Brooke D'Orsay of "Royal Pains" and Katheryn Winnick of "Bones" all made their debut in Canada's largest city.

Connor Jessup is one of the youngest members of that club. But though only 18, Jessup already has writer, director, cinematographer and producer credits to his name.

Not bad for someone who just graduated from high school.

Jessup said his parents have played a big part in his success. "They enabled me to do the things I wanted to do. They were very flexible; they were very understanding. Very supportive, as well."

They weren't pushy, either, which enabled Jessup to discover his love for acting on his own terms.

"When I was younger, I was always into drama," he said.

"I was always putting on shows - magic shows, plays - that kind of thing," he said.

His parents put him into local youth theater groups, but Jessup said, "When you're 4 or 5, you're really just running around and screaming."

When Jessup turned 11, he participated in an acting camp. It was there he noticed some of his peers had agents - and were making Doritos commercials.

"I thought that sounded pretty nifty," he said. "I convinced my mom to help me find an agent. She was reluctant; she's kind of been reticent about the whole thing since. But, she agreed and I did it.

"I think both my parents kind of thought, at first, it was just a phase, a hobby - something that I would do for a year or two, maximum, and then (phase out of it)."

Jessup admits he thought that, too. "I don't think I was too passionate about it," he said.

But as he started getting older, and as acting work started to come his way, Jessup really began to explore and "seriously watch movies for the first time."

"When I was about 14 or 15, I decided that I wanted to work in this business for a very long time," he said. "And my parents have been very supportive of that."

Jessup got his start on the Australian TV series "The Saddle Club." With the money he earned, he was able to produce the short film "I Don't Hurt Anymore!" in 2010 (he also wrote and directed).

Thanks to events such as the Toronto International Film Festival, Jessup's hometown has become more of a significant player in global filmmaking. Still, "It's not comparable to the New York or L.A. acting scenes in any way. Compared to those, it's small," he said.

But, "If you are a Canadian actor, it's a good place to live," Jessup said. "Toronto, Vancouver are pretty solid places."

He was in Toronto in 2009 when TNT began filming its hit sci-fi/action-adventure series "Falling Skies."

"At that point, when they were casting my part for the pilot, he was a very, very, very small character," Jessup said. "I was lucky to be in a very advantageous place at the right time, because they were looking for a Torontonian actor."

Jessup's role has become significant to the overall storyline of "Falling Skies." His character, Ben Mason, is the son of Tom Mason (show star Noah Wyle). When the show debuted in 2011, Ben was the property of the aliens who had attacked Earth. Now free, Ben is a key player in the war that pits alien vs. alien vs. humans.

Landing a part on an American show, Jessup said, "is one of the hardest walls to break through for a Canadian actor - especially a young Canadian actor. So, I kind of caught a lucky break in that way."

"There's so much competition," he said. "As soon as you start going out for American parts, whether it's TV or film, then suddenly your competition is no longer just Toronto, or Toronto and Vancouver and Montreal. It's now those cities plus Los Angeles plus New York. And, often, if they're casting in Toronto for an American thing, it also means they're casting in the U.K. and Australia. So, suddenly it becomes this massive, massive thing."

Jessup said he's fortunate to work with such a distinguished cast on "Falling Skies."

"Being the least experienced one of a cast that is so experienced - I'm working with Noah Wyle ('ER'), Will Patton ('Gone in Sixty Seconds'), Moon Bloodgood ('Terminator Salvation') - not just our cast, our directors and our writers ... the pedigree is almost unmatched," he said. "People from 'Lost,' 'Stargate,' 'Smallville,' 'Heroes,' 'Battlestar' - the list goes on. And to kind of be thrown into this world of talent and experience at such a young age can only do good things, really.

Jessup said Sunday's "Falling Skies" episode has "a cliffhanger at the end of the finale that blows you out of the water."

"Not only is it an incredible cliffhanger in the purest sense of the word, but it's also (significantly) relevant to the mythology of the show," he said. "It opens up a million new potential avenues that we could follow in creating our mythology. It makes you question everything ... You'll be left, hopefully, in shock."

The show will begin production on season three at the end of the summer.

Jessup will appear this fall in the film "Blackbird."