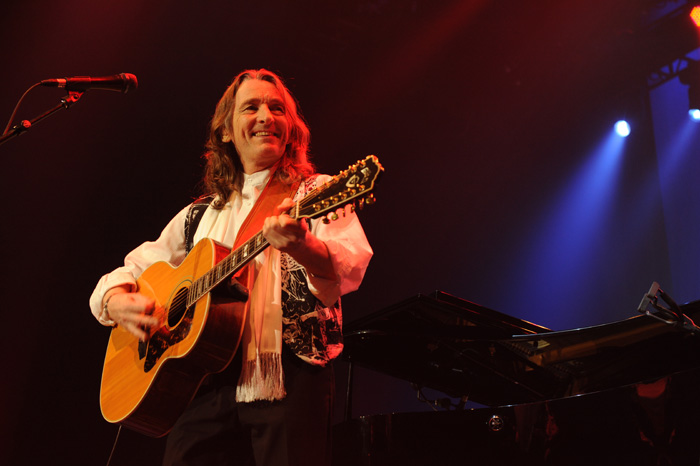 Roger Hodgson, the legendary voice of Supertramp, brings his "Breakfast in America Tour" to Artpark on Aug. 21. (photo by Rob Shanahan)

Vocalist brings his "Breakfast in America Tour" to Lewiston

Tuesday's Artpark concert will be wonderful.

And all the fans in their seats, well, they'll be singing so happily, joyfully, playfully, watching Roger Hodgson, the legendary voice of Supertramp.

An acclaimed singer, Hodgson also wrote the tunes that fueled Supertramp's 60 million record sales (including "The Logical Song"). He is bringing his "Breakfast in America Tour" to Lewiston on Aug. 21. Hodgson will headline the "Tuesday in the Park" concert series at Artpark.

"I've been touring mostly internationally for years and now it's time to come home and play for my fans in America," he wrote in an email. "Fans in the U.S. have been asking me to perform in their cities and we are trying to fit in as many shows as possible. I am calling it the 'Breakfast in America Tour.' This is my largest tour in the U.S. in 30 years - since departing Supertramp - 34 shows. Some people have written in that they are coming to several shows, so I am excited to see familiar faces and new faces in my audiences."

Hodgson, a native of Portsmouth, England, and vocalist Rick Davies formed Supertramp in 1969. After a pair of less-than-successful albums, the band hit a hot streak. From 1975 to 1985, Supertramp released hit songs "Bloody Well Right," "Give a Little Bit," "The Logical Song," "Take the Long Way Home," "Breakfast in America" "It's Raining Again" and "Cannonball."

Chart-toppers then, these songs still resonate with fans today.

"I think the reason these songs have stood the test of time so well is because they came from a very pure place and were not contrived," Hodgson said. "My songs have always expressed who I am and what I was feeling at a certain point in time. And because they were very self-honest with my longing for love, longing to know God, feelings of loss or confusion or joy, I can understand why so many people can relate to what I sing about. Because they are common emotions that people feel. I have never known how to write a song any differently. They are and have always been what my heart and soul needed to express, and that is maybe why they have touched people in such a deep way."

"They are deeply personal and do still bring out the emotions I felt when I was writing them," he said. " 'Lord is it Mine' is one that I love to play in my concerts. It came from a very deep place inside of me. I get goosebumps when I perform 'Fool's Overture.' I love the spirit of 'Give a Little Bit' and what it ignites in an audience as peoples' hearts open and they all sing along with me. Then there is the evergreen 'Take the Long Way Home,' the fun-filled 'Breakfast in America,' the joyful 'Dreamer.' "

Ticketholders will have no shortage of songs to sing along to on Tuesday.

"Many fans are telling me that they experience the sound and spirit of Supertramp in my concerts. I'll be bringing my four-piece band with me and performing all my songs people want to hear from my time with Supertramp," Hodgson said. "You can expect to hear 'The Logical Song,' 'Give a Little Bit,' 'Dreamer,' 'School,' 'Breakfast in America,' 'Take the Long Way Home,' 'It's Raining Again,' 'Fool's Overture' ... as well as some of my later material - like 'In Jeopardy,' 'Lovers in the Wind' and 'Death and a Zoo.' "

Hodgson's Artpark concert promises to be one of the most age-diverse shows this summer.

"It's amazing to look out and see three, even four generations of fans all singing and dancing together," Hodgson said. "Many young people have told me that they became fans through listening to my songs as their parents played them, and now they are ardent fans. My shows are a great experience for the whole family."

Roger Hodgson headlines the Aug. 21 "Tuesday in the Park" concert at Artpark, 450 S. Fourth St., Lewiston. Tickets ($5 through Saturday; $10 Sunday through showtime) are available at www.artpark.net.

Grand Island's Stacy Clark will open for Hodgson. The video for her song "Sign" was recently featured on MTV.

Visit Roger Hodgson on the Web at www.RogerHodgson.com, and on Facebook at www.Facebook.com/RogerHodgsonOfficial.