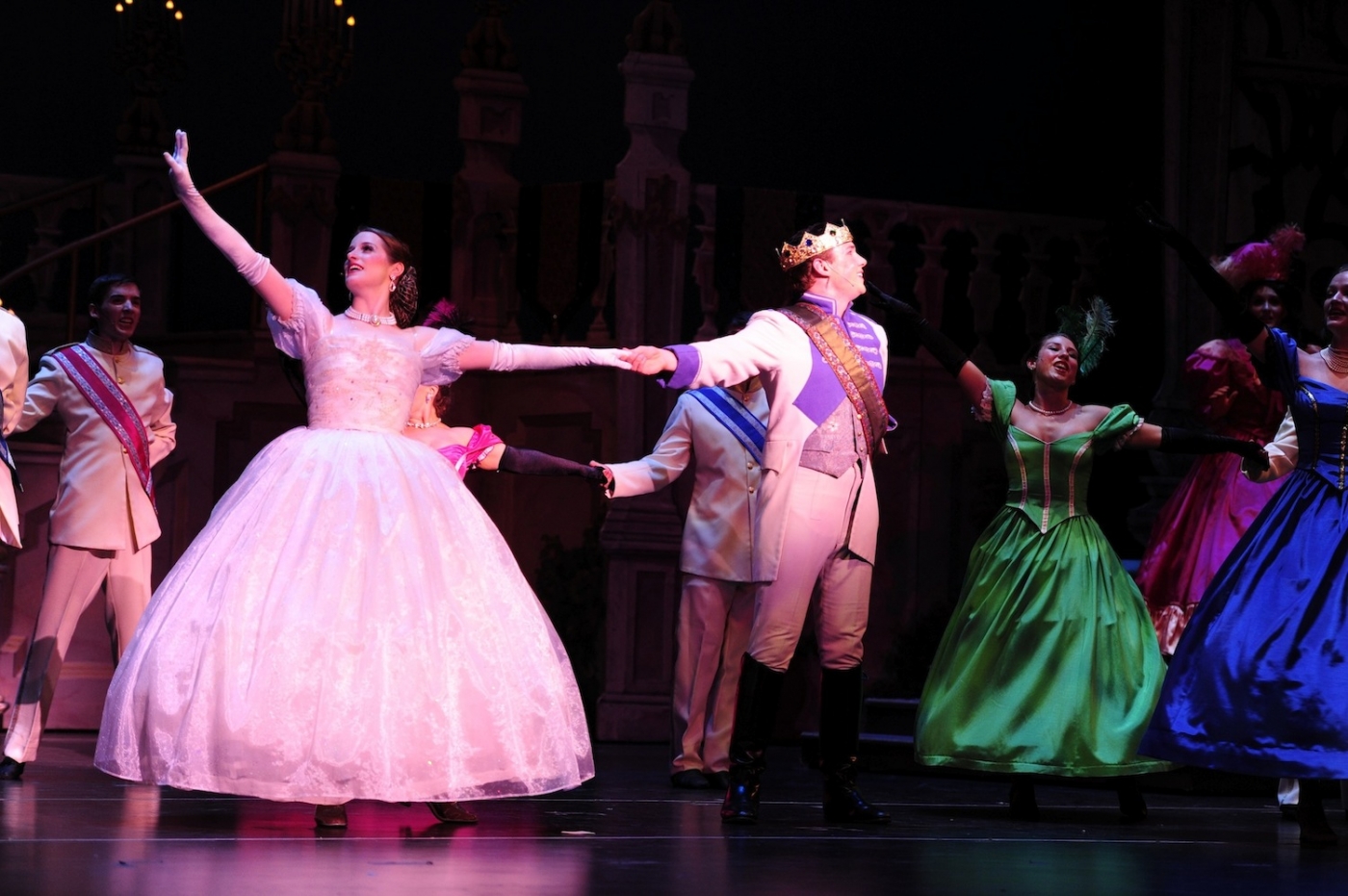 Cinderella (Emilie Renier) goes from rags to riches in Artpark's musical production of "Cinderella." The show is on stage this weekend and next week at 450 S. Fourth St., Lewiston.

When you walk up the Artpark sidewalk on the way into the Mainstage Theater, you can't help but notice the promotional shot for "Cinderella." In this version, Cinderella has blond hair, the prince is stately, the stepmother looks malevolent and the stepsisters are slightly bedraggled.

On stage at Artpark, the "Cinderella" cast is without these well-known attributes. Cinderella has brown hair, the prince looks kind of frumpy and the stepfamily is more of an annoyance than evil or disheveled.

Artpark's version of "Cinderella" does, however, maintain the famed story's plot. Upon the death of her father, Cinderella finds herself stuck with a demanding stepfamily that could care less about her happiness or well-being. She is not their daughter or sister, but rather a handmaiden at their beck and call.

One day, Cinderella, with a little help from her pet friends (also castaways) and her Fairy Godmother, is given the opportunity to find true love and the life of her dreams.

This musical, dubbed "The Enchanted Edition," takes elements of the 1997 TV production, which featured singer Brandy and the late Whitney Houston.

Before "Cinderella" begins, audiences will notice the large red curtain. When the orchestra begins playing, and the curtain is lifted to reveal the first of many majestic backdrops, it's not hard to imagine you've been transported into a fairy tale.

Actress and Elon University graduate Emilie Renier stars as Cinderella. Her debut at Artpark is, overall, a success. As one onlooker commented, she "has a Disney voice." Dark hair notwithstanding, her ability to make Cinderella likeable is a huge - and necessary - plus, and she aptly walks the fine line between longing and hopeful as her character looks to escape her stepfamily and find a better life.

Renier's Cinderella is easily the object of the audience's affection.

Betty O, who has previously performed at Artpark, gives life (and sassiness) to the role of Fairy Godmother. She is equal parts Houston and Tony Robbins. Her character motivates Cinderella to take charge of her destiny.

As the royal family's steward, Lionel, David Autovino provides a nice comedic touch as he points out particular details throughout the story.

"Cinderella's" biggest flaw is with its prince. Actor Zane Phillips is just not distinguished enough - and it's not entirely his fault. Part of the problem is his costume, which sort of makes him look like a limo driver. Part of the problem is his age (Phillips is only a sophomore at Elon). And, for those who've watched more seasoned actors on stage in recent years at Artpark (your more athletic-looking Michael Hunsaker or Chris Critelli, for instance), it's hard to picture Phillips as a royal prince.

This is not to say Phillips is lacking as an actor. He's not. In fact, he's a very good singer. But at the same time, he's not right for this role.

At Wednesday's dress rehearsal, Artpark's production of "Cinderella," like the title character, spent some time in a pumpkin patch and had to overcome a few thorns in its side. All minor missteps were corrected in time for Thursday's premiere.

Overall, then, "Cinderella" is a fun show to watch. In terms of acting and storyline, it's not on par with Artpark's productions of "Beauty and the Beast," "Aida," "Joseph and the Amazing Technicolor Dreamcoat" or "All Shook Up." However, when it comes to the backdrops and special effects (the pumpkin carriage transformation, in particular), "Cinderella" blows those shows out of the water.

Adults will appreciate the show's craftsmanship. The set pieces really are marvelous - one more than the next. And the dance interludes are a smart way to mask the scene changes taking place behind the black scrim.

Of course, the main judge of "Cinderella" is the younger set - for whom the show is designed. It's for this reason, alone, that Artpark's musical is bound for glory. (It was a rousing success on Thursday, with many young girls dressed as Cinderella.)

Children will go absolutely wild over the puppets (another change to the traditional "Cinderella" musical). Designer Adam Kreutinger's fluffy cat, scurrying mice and high-flying bird will be a huge hit with the junior ticketholders. The cloth characters are funny, and sweet, and will no doubt prompt more than a few, "Mommy, I want one!" comments.

"Royal Ticket Packages" ($55) are available for children. The price includes one prime seating ticket (must be accompanied by an adult with a prime seat ticket) and access to a post-show "Regal Reception," where children can meet several cast members.

Royal ticket packages are only available for matinee performances (Sunday, Aug. 12, Wednesday, Aug. 15, and Thursday, Aug. 16), and can be purchased in person at the Artpark Box Office or by calling 754-4375.

Artpark & Company is dedicating its 2012 Broadway musical to the late Nathan Benderson in grateful appreciation of his generosity and steadfast support for Artpark.