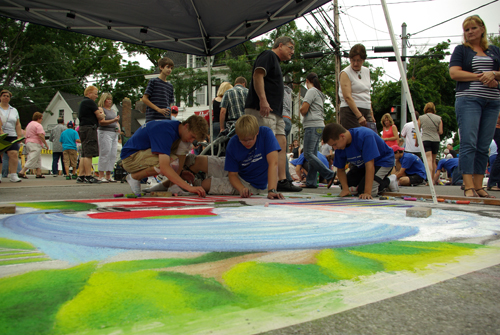 The Art Festival is Saturday and Sunday in Lewiston. (file photo)

From a foot race to a motorcycle rally, "Cinderella" to the Spoons (and did someone say something about an art festival?), the Village of Lewiston will be jam-packed with events this weekend.

The larger happenings include:

Mount St. Mary's Hospital will hold its 10th annual "River Run" on Saturday. The USATF-sanctioned, 5K-run/2-mile walk starts at 9 a.m. The course begins and ends at the Red Brick Municipal Building in the Village of Lewiston, with a main portion of the course following Lower River Road.

For $5, on Sunday, shoppers can fill a bag with books.

The Lewiston Council on the Arts presents the 46th annual Art Festival. Running from 10 a.m. to 6 p.m. both days, this prestigious event will showcase the work of more than 175 professional and student artists from 13 states. Participants will compete for prize money awarded in categories including painting, photography, graphic arts, sculpture, artistic crafts (ceramics, wood, fiber, glass) and jewelry.

A highlight of the Art Festival is the Chalk Walk competition, wherein high school students create murals on Center Street with a culturally significant theme (this year's: "Diversity is ..."). Judging takes place about 4 p.m. on Saturday.

College Alley will again feature the work of 23 high school and college students on North and South Fifth Street. A special addition to the 2012 Art Festival is a weekend-long residency program for Native American artists Rosemary Hill, Simon Brascoupé and Karen Hodge-Russell.

"Art Inspired by our Ancestors" is the theme for exhibits, demonstrations and art activities at 732 Center St., outside the Tuscarora & Friends Gallery at the Lewiston Opera Hall.

Saturday - 'The Spirit of the Eighties'

The Lewiston-Porter Class of 1987 is sponsoring "The Spirit of the Eighties," a concert reunion for Lew-Port alumni - and the first U.S. show for '80s Canadian group the Spoons. The concert begins at 6 p.m. in Academy Park. Tickets are available at the door and during the Art Festival.

One of the highlights of "The Spirit of the Eighties" is the return of The Mirrors (Kirk Andrews, Mark Acker, Chris Pucci and Tim Tyran).

The synth band was responsible for such songs as "Love is Only a Word," "Yeah, Right," "Como Esta Usted" and "A Date From Hell."

"They were kind of ahead of their time," said "Spirit" concert organizer Michael Hanrahan. That's quite a notion considering the guys were all in their teens when they formed The Mirrors.

This will be the foursome's first time performing together since the rockers' late '80s high school days.

"These guys are totally pumped for this show," Hanrahan said.

Tickets are available at www.tickets.com and www.artpark.net. For more information, call the Artpark Box Office at 716-754-4375.

More than 150 motorcycles are expected to drive into Lewiston Sunday afternoon to celebrate the life of U.S. Army veteran Jonathon Cote, and raise money to support a student at Williamsville North High School and military services provided by WNY Heroes Inc.

While working as a security contractor in Iraq in 2006, Cote was captured. Almost two years later, his body was flown home to Buffalo.

"We didn't want his death to be for nothing," said Jon's brother, Christopher, who has organized the fundraiser. "We wanted to have him still affect people's lives even though he passed away."

Jon was a bike enthusiast, purchasing his first motorcycle when he was in high school.

"He just enjoyed riding," Christopher Cote said. "He loved the feeling of freedom that it gave him."

Christopher inherited one of Jon's bikes, and rides it during the benefit run.

Sign-in for this event begins at noon at Williamsville North (horseshoe driveway on Dodge Road). Participants will have the opportunity to visit Jon's memorial tree and plaque. Registration ends at 1:30 p.m., at which time a rider meeting and prayer will take place.

The ride begins at 2 p.m. and is a scenic drive through Western New York. Motorcyclists will conclude their travel at Water Street Landing, 115 S. Water St., at about 3:30 p.m. The post-race party includes live music, food, beverages, raffles, a silent auction and 50-50 split.

Christopher Cote said his hope is that $1,000 can be raised for the high school scholarship in his brother's memory. Additional funds will go toward WNY Heroes.

The fee to enter is $20 per rider and $10 per passenger. Participants will receive a lapel pin, a decal and a food ticket.

For more information, or to make a donation, visit www.freecote.com.