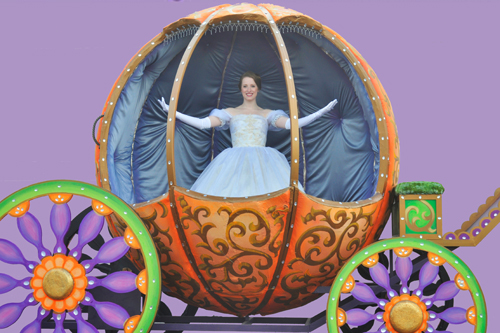 Oh, sure, when you watch Artpark's version of "Rodgers & Hammerstein's Cinderella" next week, it will be shiny, smooth and, in a word, magical. But just because it looks effortless on stage doesn't mean the production work behind the scenes is easy.

"This is probably one of the biggest shows we've done," says Artpark & Company Production Manager Susan Stimson. "The set pieces are so giant, it's reminiscent of the old opera sets at Artpark."

"The set, alone, took four tractor trailers to move," notes Artpark & Company President George Osborne. "Then you add in the costumes and the props, and it's the equivalent of a six-truck show, which is a really big show."

Now that the pieces are unloaded, the production team, led by stage manager Stimson, has to put them all together - or choreograph them - in such a way that Cinderella can seamlessly transform from a lowly servant girl into a royal princess in about two hours (and did we mention that whole giant pumpkin carriage ride?).

"The scenery is choreographed. ... It's almost another performance in itself, because you have to time it with the music," Stimson says. "This certain drop has to come in so that a scene change can happen behind it. Meanwhile, there's a scene going on stage left. Then you have something else, and the song changes."

All of this, mind you, has to happen without interrupting the story - physically, or in terms of the ticketholder's viewing experience.

"You just hope the audience doesn't even notice it - that's the idea," Stimson says. "You want to make it seamless; they don't even notice it. All they see on stage is the scenes and the actors and the singing and the magic."

Set changes - heck, carpentry and lighting cues - could take weeks to plot out. But that's not a luxury the production team has with "Cinderella." Not by a long shot.

"The actors get two-and-a-half weeks to rehearse their (parts). We have three days to figure out our end of things," Stimson says. "We have to be on our game."

"It's a challenge," Osborne says. "Once we bring the cast in ... that's 28 people, plus the assistants, the costumer, the hair and the wig person, the makeup person, the puppeteer. This has a lot of people involved with it."

"For this kind of theatrical-type production, to do it all from the ground up takes a lot of coordination," he adds. "We're fortunate to have a lot of people who are used to doing it."

Artpark & Company had planned to stage the Broadway version of "Legally Blonde" this summer. But when Minnesota's famed performing arts venue, The Ordway, made its "Cinderella" sets available - that giant pumpkin carriage, in particular - Osborne and his team changed course.

"We did so well with 'Beauty and the Beast,' and we do well with family shows," he says. "We took a look at the pictures (and we said), 'This is great.' We loved it. And the whole set is really nice. The fact that we could get a hold of this really good production sort of made us consider doing the show."

In "Cinderella," the title character has lost her beloved father and falls into a life of servitude to her cruel stepmother and loathsome stepsisters. Her dream of a better life attracts the attention of her "Fairy Godmother," who magically clothes Cinderella with a beautiful gown and glass slippers, thus enabling her to attend a grand ball. Once there, Cinderella attracts the eye of the Prince. The two hit it off, but their time together is cut short as midnight approaches and Cinderella (and her pumpkin carriage and animal entourage) start to revert to peasant form. The Prince, not sure of what's happened, finds one of Cinderella's glass shoes and sets out on a journey to find his true love.

Overall, "It's an upbeat story with really nice music - Rodgers & Hammerstein classic music - some very good comedy, and it isn't too long," Osborne says. "The whole show will probably be over with intermission in maybe two hours or a little less. So, it's a great thing to bring your kids to. It's a real family show."

"I think we follow the fairy tale storyline pretty accurately," Osborne notes. "We try to recreate magic that's in the fairy tale."

"I've seen 'Cinderella' many times, and, traditionally, it is not done with puppets," Kreutinger says. "This is unique. I have never seen a production that utilized puppets for its show."

"They took those characters - specifically the mice - I think they're usually played by people in other productions I've seen. They decided to turn those into puppets," he says. "It's not a cartoon-like version of it, whereas the mice don't talk in this version like they do in the cartoon and in other versions of 'Cinderella.'

"This is a production that I'm not familiar with. But I'm very excited to see it. I think it's going to be wonderful."

Kreutinger has worked backstage with Artpark's actors in giving life to his creations. He says he hopes his work "enhances the show in a way that puppets can do that. They can do things that actors just can't do alone sometimes in a costume. It can add a really beautiful element to the show."

In all, Stimson says, "It's a really nice set. It's going to look great."

"It's going to be pretty slick, I think," Osborne says.

Artpark's production of "Rodgers & Hammerstein's Cinderella" is on stage Aug. 9 to 17 at 450 S. Fourth St., Lewiston.

"Royal Ticket Packages" ($55) are available for children. The price includes one prime seating ticket (must be accompanied by an adult with a prime seat ticket) and access to a post-show "Regal Reception," where children can meet several cast members.

Royal ticket packages are only available for matinee performances (Sunday, Aug. 12, Wednesday, Aug. 15, and Thursday, Aug. 16), and can be purchased in person at the Artpark Box Office or by calling 716-754-4375.

Artpark & Company is dedicating its 2012 Broadway musical to the late Nathan Benderson in grateful appreciation of his generosity and steadfast support for Artpark. Through the creation of the Benderson Family Artpark Endowment Fund, Artpark & Company's annual Broadway productions in the Mainstage Theater have flourished and grown. The endowment provided support for Artpark's productions of "Aida" ( 2007), "Disney's Beauty & The Beast" (2008), "Joseph and the Amazing Technicolor Dreamcoat" (2009), "All Shook Up" (2010), "Fame: The Musical" (2011), and this year's production of "Rodgers & Hammerstein's Cinderella."

Artpark's 2012 production is presented by M&T Bank and Delta Sonic.