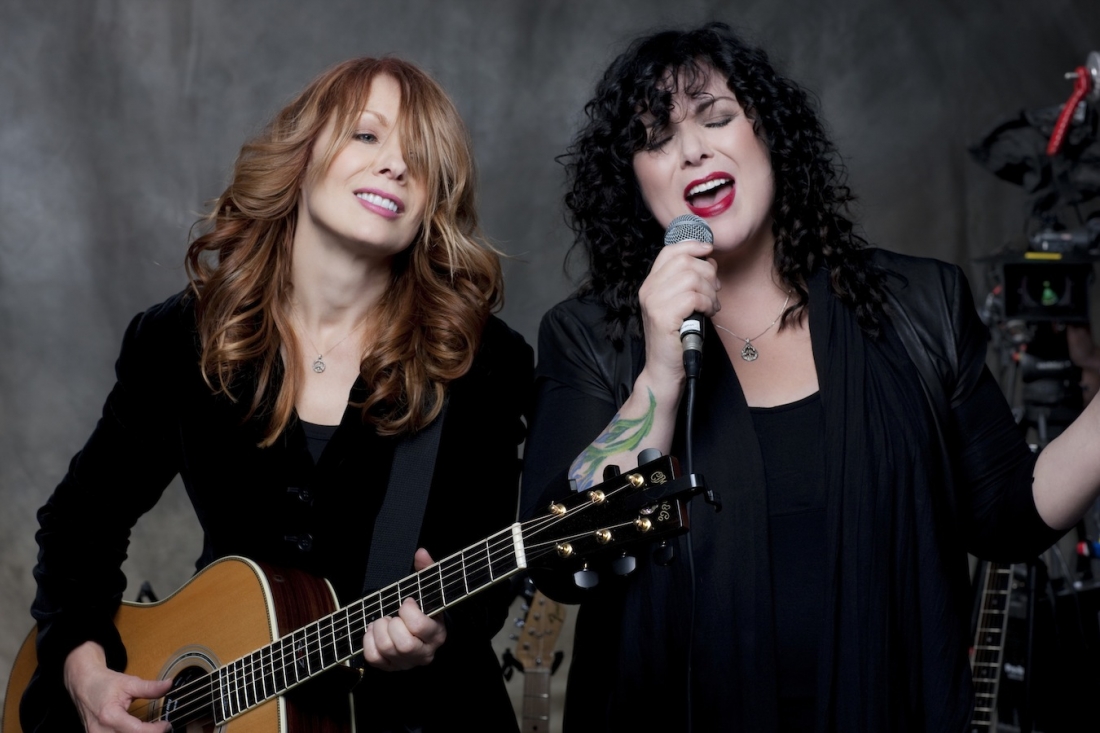 Nancy and Ann Wilson of Heart

Heart: Try to understand, it's a magic band

Does being a rock 'n' roll star and performing in front of thousands and thousands of singing, fist-pumping, hand-clapping fans ever get old?

What do you think?

"No, that would not be old," Heart lead singer Ann Wilson says.

The vocalist behind a heap of hit songs says, "That's why we do this, is because we have something to say. We really do want to get with people and do our thing and connect with them."

Alongside her sister, ace guitarist Nancy Wilson, Ann has said plenty in songs such as "Magic Man" (about the dangers of young love), "Barracuda" (about working in the despicable music industry), "What About Love?" (about finding romance in the mayhem of life), "Never" (about not giving up), "These Dreams" (about fantasy colliding with reality), and "Alone" (about struggling to find and keep "the one").

More than 35 years after forming Heart in Seattle, Ann and Nancy still sell out venues around the world. Heart performs Tuesday at Artpark, and is expected to draw the biggest audience of the season.

"Heart was one of the big shows we were able to book this year," says Artpark & Company President George Osborne. He has recently watched some of the band's live performances on YouTube. "They seem to be still at the top of their game, so I think it will be a great show."

"Our new album, 'Fanatic,' I think, is probably our most ... we ... try to light fires," Ann says. "That's what we do. We're fire lighters. And I think we brought a spark on this one. That's good. That's what I was looking for is a true spark."

Like Foreigner and Huey Lewis & The News, two of Artpark's other "Tuesday in the Park" headliners this summer, Heart has continued to release new music despite having more than enough hit songs to stage nightly "Best of" concerts.

"It's important for us to put out new music, because we don't want to rest on our laurels," Ann says. "I don't see that there's anything that exciting about laurel resting. Maybe I'll get to the point in my life where I just go, 'Oh my gosh, show me those laurels - I just want to rest on them!' But I'm not there yet."

In all seriousness, the singer explains it this way: "If we're going to go out and ask people to come out of their homes and spend their non-existent money to come see us, I'd say we better be awake and alive, and we better have something ... new to show them.

"I just feel, conscientiously, that we should be (an) awake, alive, evolving band, or we should get out of the game."

Part of Heart's charm, and something concertgoers can expect at Artpark, is a show devoid of distractions. In other words, Ann and Nancy don't have a lot of bells and whistles. They have the chops; they don't need fancy animatronics to hide a lack of talent.

"And you're going to see some hair flipping, I think, probably," she adds, laughing. "We'll be flipping some hair, boy."

"It's a rock show," Ann says. "It's people out there making it happen. We don't rely a whole lot on staging."

For those insatiable Heart fans, the band is releasing "Kicking & Dreaming" in September. The band's label, Legacy Recordings, calls the book an "insider's memoir penned by Ann and Nancy Wilson with noted Seattle-based author Charles R. Cross ('Room Full of Mirrors - A Biography of Jimi Hendrix' and 'Heavier Than Heaven - A biography of Kurt Cobain')."

"There have been people coming up to us wanting to do Heart books since, I don't know, since the early '80s," Wilson says. "But I think what made us really decide to do one now is the author, Charles Cross - who we both have been fans of for a long, long time; from Seattle - became available to do it, and got excited about doing it with us.

"He is a guy from Seattle - a journalist in Seattle during the so-called grunge time. He is so knowledgeable, and has such a complete understanding of the Seattle music scene, that we thought if anybody can really do it, it would be Charles.

"So, we entrusted him with the thing. We have been working with him for over a year-and-a-half on it now."

Ann promises the book will be the definitive behind-the-scenes story of Heart.

"When you write a book like this with somebody, you bury your soul," she says. "It's like being in therapy with them. You tell them everything. It's a big deal.

"It took us a while to get here, to the point where we could be so open and honest and proud about it."

For their efforts, Heart has garnered a reputation as one of the most respected - and coolest - rock bands of all time. The band has sold 35 million albums, and musicians including Black Eyed Peas singer Fergie call Heart musical royalty.

That Ann has achieved these things alongside her sister, Nancy, makes the accolades that much sweeter.

"We were just natural creative partners," Ann says. "It's really, really fulfilling. It's hard to find anything else creatively that is as fulfilling as that for me."

"It's extremely creatively fulfilling," she says.

Heart performs July 24 as part of the "Tuesday in the Park" concert series at Artpark. The show begins at 6:30 p.m. with opening act the Bruce Wojick Band. General admission tickets are $10 Friday and Saturday or $15 Sunday through Tuesday. For more information, call 716-754-4375 or visit www.artpark.net.