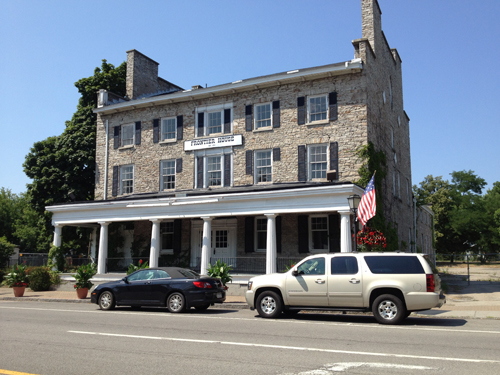 The Frontier House on Center Street in Lewiston.

What if the Village of Lewiston had its own version of the famous Pearl Street Grill & Brewery smack dab in the middle of Center Street? That's one proposal under consideration for the long-vacant Frontier House.

The four-story building, built in 1824 as a world-class hotel, has been empty since McDonald's pulled out in late 2004. In recent months, Village Board members have met with the Frontier House principals - developer Richard Hastings, attorney John Bartolomei and E.I. Team (structural engineering) President Hormoz Mansouri - seeking to move forward with a plan that will benefit both sides and, more importantly, Lewiston residents.

The idea of a putting a microbrewery inside the historic building has drawn favorable comments from Richard Soluri, who was mayor when McDonald's left, and Terry Collesano, who vowed to take action on the Frontier House when he was elected mayor in 2010.

"I remember the rathskeller that was there," Soluri said. "That was a hot spot in the village."

He recalled the establishment's stone walls and alcove - its overall ambiance - and said, "If you were (from) out of town, that was the kind of place you'd want to go to."

"I would have no objections to (a microbrewery), because at least there'd be some activity in the building, and, consequently, it might generate some income," Soluri added.

"We do think it can work," Collesano said.

"I think the community would go along with that idea, I really do," he added. "We wouldn't be talking about condos anymore. It would be a great way to save that building."

If the Frontier House were to reopen as a culinary destination, it would be run by The Silo Restaurant proprietor Alan Hastings - Richard's son. Alan said it's premature to discuss specific details, but stated, "It's definitely my dream to make this happen."

"I think that a business like a microbrewery is a great fit for Lewiston," Alan Hastings said. "I think Lewiston needs a microbrewery. And the Frontier House needs a business."

Soluri said Richard and Alan Hastings "have done a great job" growing and beautifying The Silo and its surrounding grounds.

"It's a destination," Soluri said. "I think it looks great."

Richard Hastings said adjoining condominiums are still the first option for the Frontier House. In 2007, he offered a plan to build more than two-dozen boomer-targeted living quarters in an L-shape around the Frontier House (above the parking lot). His idea was approved by the village's planning and zoning boards, but derailed when fellow developer Herbert Richardson filed an Article 78 against him, and the Village of Lewiston, in 2008. Richardson's case was dismissed in late 2009 in State Supreme Court, and Bartolomei revisited the condo plan last year.

The Frontier House principals suggested the addition of a four-story structure. The top three levels would hold up to 32 condo units, while the street-level first floor would boast retail opportunities on Center Street. A covered parking lot would face Ridge Street.

Under this proposal, the Frontier House could be deeded over to the Village of Lewiston, which, as lead agent, could apply for grants to restore and refurbish the building, which once housed Gov. DeWitt Clinton, James Fenimore Cooper, Charles Dickens and John L. Sullivan.

Soluri said it would be good to have more people living right on Center Street and, presumably, shopping and dining along Lewiston's main road.

"I think that has value, but I know there were a lot of skeptics on how it would look," he said.

One year ago, when the condo idea was revisited before the Village Planning Board, Mansouri said, "At the end of the day, we have to come up with a skin that is acceptable to the majority of village residents."

A third Frontier House proposal would involve the village going to court and seeking to take over the building via eminent domain.

"I would much rather see private ownership ... and we'll help any way we can," Collesano said. "If we have to be the lead agency for them to secure grant monies, we'd be more than happy to do that."

"A lot of people say, 'Why don't you put pressure on them, pressure on them, do this, do that.' Well, we don't want to alienate (the principals) at this point," he added. "We're trying to give them the benefit of the doubt."

Soluri would like to see both sides pick an option and move forward.

"You can spot a visitor ... you can see their curiosity about the building, and how they look in the windows, and how they take photos of it," he said. "There's no doubt that should be the focal point of Center Street - because it is, and it's not occupied."

Both Richard and Alan Hastings said finding the right fit for the Frontier House is no simple task.

"It's been a really rough road," Alan Hastings said. "It's unfortunate that the Frontier House isn't developed."

Collesano said, "We want to see it go (forward). We really do. The entire board believes that the center of Lewiston is the Frontier House."

•Click here for more about the Frontier House, and the proposals mentioned in this article.