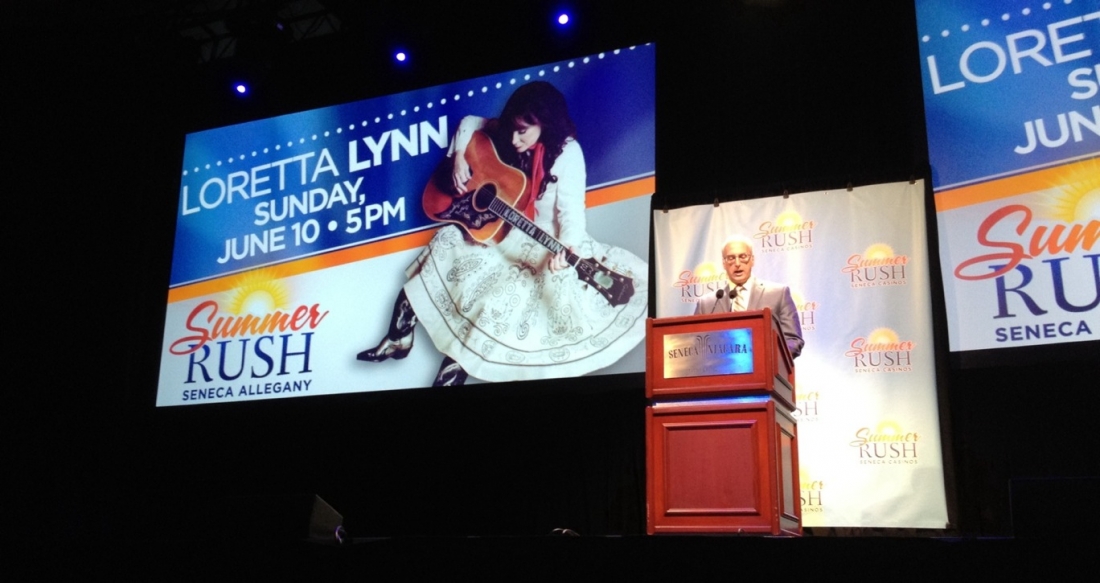 Seneca Casinos will deliver an unprecedented level of excitement this summer to the Western New York, Southern Ontario, and Northern Pennsylvania and Ohio regions with "Summer Rush" - a package of world-class entertainment, promotions and special events during June through early September.

"Summer Rush" takes place at the Seneca Niagara Casino & Hotel in Niagara Falls, Seneca Allegany Casino & Hotel in Salamanca, Seneca Buffalo Creek Casino in Buffalo and Seneca Hickory Stick Golf Course in Lewiston. Just some of the many offerings include blockbuster entertainment performances by Stevie Nicks, Larry the Cable Guy, Joe Walsh and more; the return of ESPN's "Friday Night Fights" to Niagara Falls; and hundreds of thousands of dollars in prizes with the most exciting casino promotions in the northeast.

"Two words - 'Summer Rush' - really say it best for the experience at Seneca Casinos during the warm months," said Jim Wise, senior vice president of marketing, Seneca Gaming Corporation. "Spirits are up in the summertime, and people are looking for opportunities to have fun and be entertained. There's nothing like going to Seneca Casinos for the highest rush of excitement."

The excitement also takes place at Seneca Allegany Events Center this summer with country matriarch Loretta Lynn on June 10; Sylvia Browne on June 30; Lonestar - a country mega-group that is celebrating 20 years of great music - on July 14; classic rock icon Meat Loaf with his "Mad, Mad Summer Tour" on July 29; Eagles guitarist and rock singer Joe Walsh - who will bring his own array of classic rock hits - on Aug. 11, and; Trace Adkins - a perennial country favorite of Seneca Casinos guests - on Aug. 26.

"Summer Rush" at Seneca Casinos also includes the return of ESPN's "Friday Night Fights" for the first time since Nov. 15, 2008. The action takes place inside Seneca Niagara Events Center on June 29 with undercard bouts beginning at 8 p.m. and the ESPN telecast from 9 to 11 p.m. The main event will be a 10-round bout featuring Ruslan Provodnikov (21-1-0, 14 KO's) of Beryozovo, Russia, versus Nick Casal (22-4-1, 17 KO's) of Niagara Falls. The co-feature bout has former IBF Featherweight champion Cristobal Cruz (39-13-3, 23 KO's) from Tijuana, Mexico, squaring off against Cesar Vazquez (26-0-0, 16 KO's) from Mexicali, Mexico. Tickets start at $40 and go on sale April 25 at noon.

Tickets for all entertainment offerings will be available at all Seneca Casino box offices, www.Ticketmaster.com, all Ticketmaster locations, or by phone at 800-745-3000. Additional events may be added in the coming months.

Promotions during June include a $20,000 slot tournament at Seneca Allegany Casino, a $50,000 sweepstakes at Seneca Niagara Casino, and the Seneca Summer Shopping Spree at both casinos - offering guests the opportunity to purchase some of the summer's hottest items and new technology using gaming points. In addition, Seneca Buffalo Creek Casino will have a $6,000 sweepstakes and an ongoing hot seat contest to win baseball tickets.

To kick off July, Seneca Allegany will host its extravagant fireworks display on Monday, July 2. The following evening on Tuesday, July 3, an equally spectacular fireworks display will take place at Seneca Niagara. In addition, Seneca Niagara Casino and Seneca Buffalo Creek Casino will each host slot tournaments throughout the month. At Seneca Allegany Casino, the "Great Race Giveaway" will include opportunities to win tickets, pit passes and more to New York's yearly biggest stock car race.

In August, all three casinos will offer ticket giveaways and opportunities to win exciting merchandise for Buffalo's professional football team, with grand prizes that include season tickets and a trip to the Super Bowl. In addition, racing fans will have the opportunity to meet legendary driver Rusty Wallace at Seneca Allegany Casino on Thursday, Aug. 9.

Ticket giveaways and opportunities to win exciting merchandise for Buffalo's professional hockey team will take place in September at Seneca Niagara Casino and Seneca Buffalo Creek Casino. For daily slot tournament lovers, there will be a buy-in tournament every Monday through Thursday with $20,000 in prizes at Seneca Allegany Casino, as well as a special $10,000 giveaway throughout Labor Day weekend.

Golf fans who want to stay overnight at Seneca Niagara Casino & Hotel and play at Seneca Hickory Stick Golf Course in Lewiston can enjoy a special package with discounted hotel rates. The course is in its second full season of golf and was recently ranked as one of the Best Casino Courses in the U.S. by Golfweek magazine. Golfers can enjoy a new Seneca Hickory Stick Loyalty Card for $29.99 with hundreds of dollars' worth of benefits, as well as delicious food at the new Seneca Hickory Grill restaurant.

Fans of "Summer Rush" should be on the lookout for an upcoming coupon book with $200 of savings toward retail, dining, golf and spa services. In addition, Seneca Casinos will continue to roll out partnerships with nearby hotels to provide hotel guests with casino vouchers.

And finally, amidst the adrenaline of "Summer Rush," exciting construction projects will be under way at two of the Seneca Casino properties. At Seneca Allegany Casino & Hotel, work continues on a $53 million new hotel tower that will nearly double capacity from 212 to 413 rooms. And this summer, construction is slated to begin at Seneca Buffalo Creek Casino for the recently unveiled $130 redesigned property.

•Click the link below for a full schedule and ticket on-sale dates.