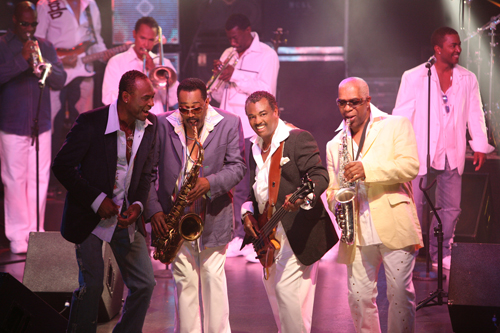 He didn't know it at the time, but Robert "Kool" Bell and his band, Kool & The Gang, were auditioning for a U.S. tour when they performed last summer in Glastonbury.

Watching the band from afar was "Diamond" David Lee Roth, who was preparing to reteam with Van Halen for a massive tour. He was scouting potential tourmates.

While these two bands might seem completely different on paper, Roth was instantly convinced Kool & The Gang would be a perfect opening act for Van Halen.

"David Lee saw us at the Glastonbury Festival last year," Kool says. "They were working on getting together for their 40th anniversary tour. We had about 60,000 people in front of our stage, and they saw us rock 60,000 rock fans. He went back to his camp and said, 'That's who I want. I want Kool & The Gang to be part of our 40th anniversary tour.'

So there will be good times, and laughter, too, when Van Halen and Kool & The Gang perform Friday at First Niagara Center in Buffalo. The show begins at 7:30 p.m., and tickets are available at www.tickets.com.

His band, which often performs overseas, has a set U.S. schedule, a tour bus, "the whole nine yards," he says. "We're just having a ball."

Impressively, Kool & The Gang condensed six decades and nine No. 1 hit songs into a tight, 50-minute set, which includes staples "Misled," "Emergency," "Hollywood Swinging," "Jungle Boogie," "Ladies Night," "Too Hot," "Get Down on It" and "Celebration."

And while many in the crowd are waiting to fist-pump to Van Halen each night, Kool & The Gang's set never fails to win over the audience.

"When we get to 'Ladies Night,' they partying," Kool says.

Younger people, too, are starting to discover Kool & The Gang.

"Young fans, they get into our music," he says. "They hear it in the house from their parents, (who say), 'This is what I used to dance off of,' so they kind of get into it."

Joining Kool on stage is guitarist Shawn McQuiller, who was born in Lackawanna and once performed with Eddie Van Halen.

He's expecting to see some old faces at the concert.

"I have family in Buffalo, as well," Kool notes. "Also, our keyboardist, Curtis Williams, is also from Buffalo."

With this sort of home field advantage in hand, fans in attendance Friday can expect a little something extra from Kool & The Gang.