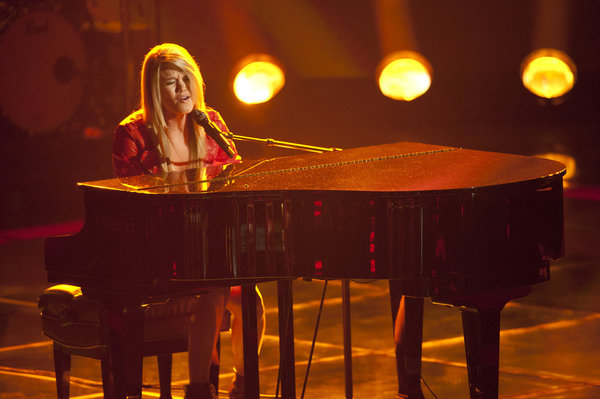 Pictured from "The Voice" is Nicolle Galyon. The show airs Monday at 8 p.m. on NBC. (photo by Lewis Jacobs/NBC)

If there's one thing missing from country music ... it's more piano?

Classically trained pianist Nicolle Galyon hopes to merge her talent and style with traditional country music while making a name for herself on season two of "The Voice."

"I'm not trying to bring classical piano into country music. I'm just trying to integrate piano into country," she said. "And, you know, I grew up playing piano for the Methodist church and every Sunday we would go to my grandma's house and our whole family would gather around the piano, and at holidays we'd gather around the piano. And to me that's very 'Middle America' and very country.

"And, so, I don't feel like it's a forced thing to sit at a piano and play country music. And if you turn on the radio, there's so much piano in what's out there. I just don't think that people are used to seeing a girl sitting at the piano singing about Kansas and 'Middle America,' and I think that's what makes me different."

Though she landed on Maroon 5 pop-rocker Adam Levine's team, Galyon said her music is pure country.

"Well, I tell people that I never really chose country music," she explained. "You know, I grew up in Kansas and when I started writing songs, I was writing what I knew. And that just ended up being country. And as long as I'm being honest, my music's going to be country."