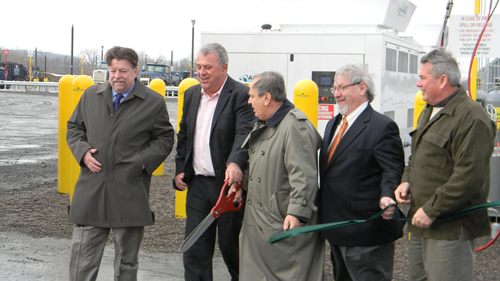 Story and photo by Terry Duffy

"It's not often you get involved in a project that has so many positive attributes for your community, your customers, your company."

In a time of sky-high fuel prices, marked by continuing uncertainty in the Middle East and ever-increasing worldwide demand, Modern, from the impetus of its owner/president Rick Washuta, took a bold step ahead into the future of energy efficiency this week with the startup of CNG fueling services for a number of its vehicles.

Through the efforts of State Sen. George Maziarz, who chairs the Senate Energy Commission, the company was able to secure $1.25 million in U.S. Department of Energy Clean Cities funding by the New York State Energy Research and Development Authority to get the project under way.

"Without them (Maziarz and NYSERDA) this wouldn't have happened, if at all, until several years down the road," said Smith.

"He (Maziarz) saw the value of this project right away," said Smith. "He encouraged NYSERDA to get on board."

"I see how important it is to invest in alternative fuels," said Maziarz. "I commend Modern and NYSERDA for this collaborative effort, as it will not only create job opportunities, but will also result in a cleaner environment for all residents of Niagara County."

With funding secured, Modern went to work with local governments, soliciting vendors and forming partnerships with utility providers to make it a reality. Support was gained from Town Supervisor Steve Reiter and the Lewiston Town Board. Soon after, town permits were approved, and support was realized on the county level from Legislator Clyde Burmaster and state level from Assemblyman John Ceretto, and the project began to gel.

Smith praised the role of its selected vendor, Vocational Energy of Tampa, Fla., for working through the logistics maze on Modern's behalf and teaming with local utilities and vehicle vendors to make it all happen in just a matter of months. "We started this project talking with several vendors. The first one walked away from us."

Of the Vocational Energy group, he added, "They did a fabulous job, coordinating with National Fuel, National Grid, the truck vendors to have it all come together at once," said Smith.

The result is a brand-new CNG fueling station and 15 new CNG-fueled garbage trucks. Modern expects to invest an additional $3.9 million into the project and acquire additional CNG vehicles by the end of 2012 - bringing the number of CNG vehicles to 30, or about a quarter of its fleet.

"Modern is thrilled to be involved in a project that is a win-win for us, our customers and the community," said Smith. "We would also like to thank NYSERDA for its role in helping to fund this environmentally-responsible initiative. Modern has had a long history with clean energy projects and we will continue to invest it in environmentally-friendly solutions in the future."

"The opening of the fueling station at Modern is something that Niagara County can be proud of," added Maziarz.

NYSERDA president and CEO Francis J. Murray Jr. also lent praise to the successful Modern-NYSERDA partnership, commenting, "Things like this just don't happen because someone in Albany thinks it's a good idea. These kinds of activities come to be as a result of individuals in the public and private sector."

Murray called natural gas the cleanest burning alternative-transportation fuel commercially available today, and the most practical in times of tight oil supplies and very high prices that see no end in sight. "The transportation sector accounts for 76 percent of the oil consumed in the United States," said Murray. "Without a comprehensive plan to address this consumption, the number is projected to reach 72 percent by 2020."

The new operation joins such Modern successes as a methane-producing landfill, which by means of 11 generators produces 12 megawatts of electricity and powers a 12-acre hydroponic greenhouse, which harvested 5 million pounds of tomatoes last year.

With its new operations, Modern is among a select handful of like CNG fueling station operations in the Buffalo and Western New York area. They include National Fuel truck facilities in Buffalo, Tonawanda and Niagara Falls, state Department of Transportation facilities in Buffalo and Mayville, a State Parks fueling station in Niagara Falls and a State University of New York facility at the University of Buffalo Amherst campus.

"This is really something that we're proud of," commented Washuta on the new venture.