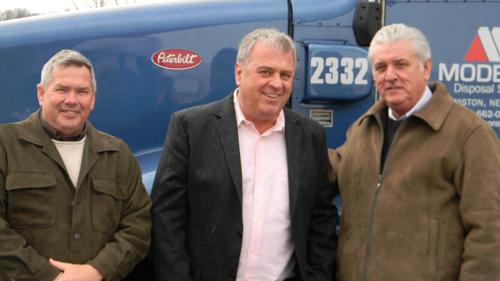 Modern, a 48-year-old company with a long history of clean-energy projects, is planning to continue purchasing additional CNG trucks. The new station can fill 40 vehicles overnight, and the company plans to have nearly 30 CNG vehicles by the end of 2012, or about a quarter of its fleet.

CNG vehicles are cleaner than trucks that run on diesel. They have lower emissions of greenhouse gases, particulates, and nitrogen oxides. The vehicles are also quieter than diesel-powered trucks.

"Modern is thrilled to be involved with a project that is a win-win for us, our customers and the community," said Gary Smith, P.E., C.O.O. of Modern Corporation. "We would also like to thank NYSERDA for its role in helping to fund this environmentally responsible initiative. Modern has had a long history with clean-energy projects, and we will continue to invest in environmentally friendly solutions in the future."

When used as a transportation fuel, natural gas can reduce greenhouse gas emissions by up to 25 percent when compared to petroleum fuels, and can significantly reduce other pollutants as well, according to the U.S. Environmental Protection Agency. Natural gas is the cleanest burning alternative-transportation fuel commercially available today. The use of domestically produced alternative fuels such as natural gas, propane, electricity and bio-fuels can curb harmful emissions and help reduce U.S. dependence on imported petroleum.

"The transportation sector accounts for 67 percent of the oil consumed in the United States. Without a comprehensive plan to address this consumption, the number is projected to reach 72 percent by 2020," said Francis J. Murray Jr., president and CEO of NYSERDA. "NYSERDA is proud to join forces with Modern Disposal to unveil this major investment in alternative transportation fuels and help continue to reduce the state's petroleum consumption."

Officials from Modern and NYSERDA joined State Sen. George Maziarz and other dignitaries in a ribbon-cutting ceremony at the new CNG station.

"The opening of the fueling station at Modern Disposal is something that Niagara County can be extremely proud of," Maziarz said. "As chair of the Senate Energy Committee, I see how important it is to invest in alternative fuels. I commend Modern and NYSERDA for this collaborative effort, as it will not only create job opportunities, but will also result in a cleaner environment for all residents of Niagara County."

Modern, which owns and operates an on-site landfill, has a variety of clean-energy projects. The company burns its landfill-generated methane using 11 generators to create 12 megawatts of electricity, then redirects the waste-heat to maintain a 12-acre hydroponic greenhouse, H2Gro. The power plant capacity is enough to provide electricity to more than 10,000 homes. The computer-controlled greenhouse uses crushed coconut husks to grow tomatoes - 5 million pounds last year.

According to the U.S. Department of Energy, there are now 106 CNG filling stations in New York state, including 34 that are open to the public. NYSERDA has helped pay for 18 stations, other than Modern Disposal. Of the 18, 10 are on Long Island and the others are distributed across the state.