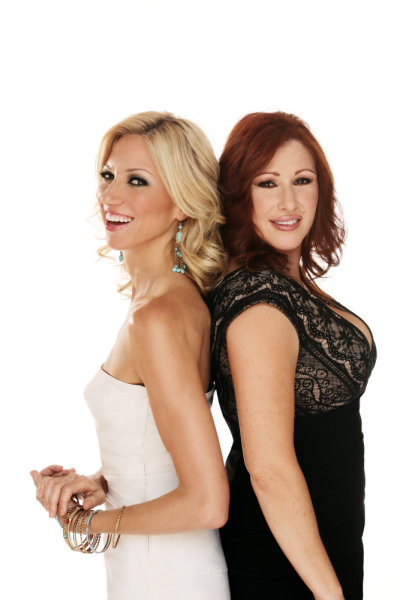 From "Mega Python Vs. Gatoroid" are Deborah Gibson as Nikki and Tiffany as Terry. (photo by Syfy).

"Pythons are not at the top of the food chain. I am!"

"What's crazy about this? We're just feeding steroids to the gators."

Dialogue like this is delightfully cheesy in and of itself. But, when uttered by 1980s teen sensations Debbie Gibson and Tiffany, only one word can describe this cinematic experience: awesome.

Plotwise, the story is fairly straightforward. Gibson plays Nikki, an animal activist who is determined to free snakes taken from the wild. She releases these pythons into the Florida everglades, an area monitored by park ranger Terry (played by Tiffany). Before long, the pythons get a little too big for their britches and threaten the swampland's natural gator population. Terry then takes action and supersizes her charges.

In short, mega pythons battle gatoroids. Tiffany battles Debbie Gibson. It's a little slice of cheese sure to tantalize fans of either genre ('80s pop music or campy sci-fi).

"I think it's great," Tiffany says. "I think it's something that our fans have waited for a long time. I mean, the funny thing to me is who would've thought that pythons and gators would unite us?"

"Yes, I mean, back in the day, I, we were both kind of running so fast that - running just as fast as we can, to coin a phrase - and we would cross paths, doing a TV show here or there or whatever. But it was really like ships in the night," Gibson says.

"We've been put in the same sentence forever and ever and we're well aware that there are definite pop-culture fans out there that have wanted us to collaborate on something for a long time," she says. "And we're just happy to give them what they want. We're giving the people what they want!"

In the movie, Nikki and Terri come to blows over their handling of Mother Nature. Their fight involves food and flipping over tables. It's a hoot. It's also pure fiction. Debbie and Tiffany have recently become friends. At the peak of their popularity, some media types supposed the two were bitter rivals. That, they say, couldn't be farther from the truth.

"I think it'll be more therapeutic for people to watch (the movie) who have fantasized about that happening," Gibson says. "I know that this is not what you want to hear, but I really never did have the desire to slap Tiffany in the face."

"Oh come on! No I've never had that either," Tiffany says. "I mean, again, going back to all this animosity and rivalry and that was. ..."

"Who had time for that?" Gibson says.

"And so yes, we are good," she stresses. "But, again, we're just kind of playing out what - the supposed rivalry for the fans that kind of imagine there was, (and) still want to believe there was. ... They'll enjoy seeing this play out on film."

While Gibson, 40, and Tiffany, 39, could pass for women half their age, the two are entering their fourth decade as performers. The key to a lasting career, Gibson says, is "stay open to doing all these things and be versatile and make sure your chops are developed in every area, because to have a long, sustainable career - that's why Tiffany and I are still here doing this, because we've been able to be versatile and do new things."

While each has experienced career highs and lows, both are enjoying their current celebrity status.

"I feel like, the relevant thing comes and goes," Gibson says. "It's funny; it's like 10 years after releasing my first record I wasn't cool. And then when 20 years goes by you're relevant again and you're cool again. And things are just circular.

"So I think the key - it's like take a lesson from Cher. If you just keep doing what you do and wait for the type of comeback ... instead of, kind of, selling out trying to be who you're not and chasing trends. I think if you just do your thing and you stay in the game long enough, that that relevance thing just keeps coming back around."

"I think that's the whole thing is just live," Tiffany says. "For me I don't think about trying to chase down the success that I once had. I just do what's natural to me. I enjoy the process. There's times that I do sit back and go, 'Wow, would I really want all that craziness?' As great as it is, it's a lot. It's a big commitment to be on top of the charts and to just be everything to everybody all at once.

"Sometimes for me now I'm kind of like, I would love that, because, musically, that's successful. But it's a tall order as a person, whereas doing an album and then getting to go off and do projects and going home and being a mom and all this other stuff that I do with just living is a nice balance for me.

"I don't think you can sit back and try to chase things," she says. "You have to just be and just live and, like Deborah was saying, share in all these great examples that we both admire, just kind of do their thing and then they come full circle back around.

"One of my biggest people that I look up to is Bette Midler; Stevie Nicks; people that have had quite the years but they're always creating. That's kind of a chance to recharge your batteries and hopefully come back and have this renewed spirit about you."

And it never hurts to have mega pythons and gatoroids involved.