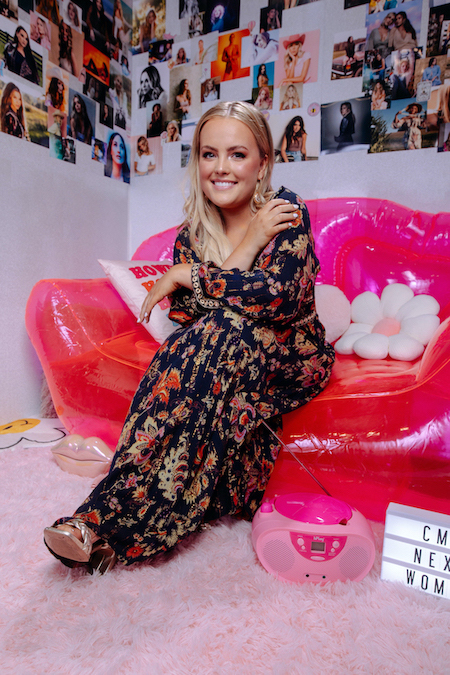 One of CMT's ‘Next Women of Country,’ MaRynn brings along CMT's Instagram followers

Newly named one of CMT's “Next Women of Country,” a snow-covered MaRynn Taylor led more than 70,000 football fans in the singing of the national anthem before Sunday’s AFC Divisional Round playoff game reuniting the Bills and the Bengals – this time, at Buffalo's Highmark Stadium. Giving fans an insider's look at her day in Buffalo, including the on-field access, MaRynn took CMT's Instagram followers along for the day without having to bundle up for winter weather.

Following an “exciting week” in Nashville, the rising Black River songwriter/artist headed north to Buffalo. Her first time performing the national anthem for the Buffalo Bills and the emphatic #BillsMafia, it marks the Michigan native's second performance at an NFL game, following her debut at a Detroit Lions game.

Adding to the excitement was the miraculous recovery and return of Bills' safety Damar Hamlin, who viewed the game from a suite with family.

Digitally available now, tracks from MaRynn's debut EP, “Something I Would Do,” including "Every Single Summer," have been featured on top playlists, including Apple Music's “New in Country,” Amazon Music's “Breakthrough Country,” Pandora's “Rising Women in Country,” and YouTube Music's “Country's New Crop,” and teen country playlist.

LISTEN to “Something I Would Do” here

"I want people to hear my story and connect it to their story," MaRynn said.

In the 2022 holiday season, denim destination and specialty retailer The Buckle Inc. announced its new partnership with MaRynn on her Christmas release of "O Come, All Ye Faithful." The partnership included the outfitting and holiday premiere of her official music video of the holiday classic.

MaRynn's garnered 4 million cumulative streams and won six Telly Awards. Her five-song EP, “Something I Would Do” (Black River), provides a glimpse into the 21-year-old's world, with each track offering snapshots of her present and past.

A press release noted, “The radio-ready ‘Every Single Summer’ reflects on a youthful MaRynn spending carefree days on Lake Michigan, playing outside and hanging with friends.”

"As an artist and human being, I want my music to inspire and be relatable," MaRynn said. "Growing up with idols like Carrie and Taylor, I could relate to them. It was as if I could feel their heartaches in the music, and as if the stories in their songs reflected mine. Today, that's what I want to give to my fans."

She eventually moved to Nashville, where a chance encounter at the 2019 CMA Music Festival gave her the break she needed – an impromptu performance after Black River Entertainment's “60 Second Spotlight” event had already closed for the day.

MaRynn said she spent the next few months in "music summer camp," learning about songwriting and recording music for the first time in a professional recording studio. The singer said she is excited to get out on the road and share these songs that are so close to her heart with fans and hear their personal stories, too.

"I genuinely care about people and their feelings,” MaRynn said. “I'm a good listener, and want to be there for people. There's not enough of that in the world right now."