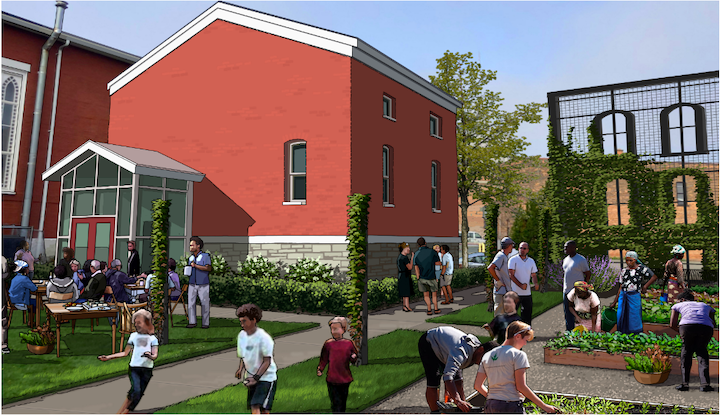 √ See renderings of the addition here

Empire State Development on Monday announced the completion of phase one and the start of the second phase of construction at the historic Michigan Street Baptist Church in Buffalo.

Phase one included a stabilization effort of critical structural components of the church, funded through grants from ESD and the New York State Office of Parks, Recreation, and Historic Preservation (OPRHP), along with other state and federal sources. Phase two involves a $2.2 million project to expand facilities, including a two-story addition to further ensure the building’s structural integrity; and will address safety and programming needs at the church, while also providing better access for disabled visitors.

The Buffalo Niagara Freedom Station Coalition, a not-for-profit organization that owns the church, is one of the recipients of a portion of ESD’s $65 million East Side Corridor Economic Development Fund that aims to help boost tourism and visitation to Buffalo’s historic Michigan Street African American Heritage Corridor. ESD is collaborating with a consortium of philanthropic partners known as “East Side Avenues,” managed by the University at Buffalo Regional Institute. East Side Avenues is providing funding for staff/programs for the Heritage Corridor Commission – of which the church is an anchor institution – to best complement and leverage capital funds provided by ESD and OPRHP.

Empire State Development President, CEO and Commissioner Hope Knight said, “Our collective goal is to create a unified tourist destination that will tell the story of Buffalo’s contribution to African American history, while attracting new visitors to the region. We are strengthening Buffalo’s cultural tourism potential by creating a hub of activities for visitors that includes the Michigan Street Baptist Church, the Colored Musicians Club, Nash House and the Nash Lofts multiuse building. Capital investments in all the corridor projects will improve the visitor experience and better connect the assets to each other and downtown Buffalo.”

A press release stated, “The Buffalo Niagara Freedom Station Coalition works to preserve and promote the heritage of the Michigan Street Baptist Church, located at 511 Michigan Ave. The church was completed by African Americans in 1849 and was the last stop on the Underground Railroad for freedom seekers escaping to Canada before the Civil War. It has been listed on the National Register of Historic Places since 1974.

“The second phase of construction includes an addition to the north side of the Michigan Street Baptist Church (circa 1848), which is designed to mirror a typical structure that would have existed in the neighborhood. It will provide accessibility to the upper and lower levels of the church, as well as accessible restrooms. Brick and stone veneer will be used as finish materials. Windows will have segmental arch brick headers and precast sills. The porch railing system is constructed with turned pickets and larger square newels and intermediate posts. The stair of the porch serves a first-floor front door, typical of the raised stoop buildings that were formerly in the neighborhood. Handicapped access is provided at the rear of the addition, at a split level.”

ESD is providing a $2,211,500 grant for the second phase of the project to further realize the restoration and rehabilitation work needed to make this cultural cornerstone accessible to all in the community. Previously, New York state supported phase one through a grant of $900,000 from ESD, and a $375,000 grant from OPRHP to aid in the structural stabilization of the building.

New York State Office of Parks, Recreation and Historic Preservation Commissioner Erik Kulleseid, “Telling the whole story of our history is the only way to truly understand the tremendous heritage in our state, and the Michigan Street Baptist Church is such a vital piece of that history. I am pleased that State Parks can contribute to this important project.”

Lillie Wiley-Upshaw, Chair of the Michigan Street African American Heritage Corridor Commission board and chair of the Buffalo Niagara Freedom Station Coalition, said, “It has been a privilege to witness the restoration and development of a church built in 1849 by freedom seekers into a local and national historic site. The church’s operational board, the Buffalo Niagara Freedom Station Coalition, are thankful for the ongoing support from the Buffalo area community and our funders.”

The press release said, “With support from Gov. Kathy Hochul, ESD is implementing the East Side Corridor Economic Development Fund, a $65 million initiative to spark revitalization of Buffalo’s east side through investments in the four main commercial corridors: Michigan, Jefferson, Fillmore and Bailey avenues. Funding is helping to revive traditional main streets and commercial corridors through the preservation of historic buildings, investing in capital improvements in neighborhood assets, expansion of commercial opportunities, improvements to infrastructure, as well as the promotion of mixed-use private investment in these neighborhoods.

“In June 2022, the governor also announced a ‘Regional Revitalization Partnership’ (RRP) with philanthropic organizations and local government, which will involve a $300 million combined investment in east Buffalo, Niagara Falls and Rochester. Under the RRP, the Michigan Street African American Heritage Corridor and its anchors are targeted for an additional combined investment of $30 million to help implement components of its strategic master plan completed with ESD funding in February 2022.”

University at Buffalo Regional Institute Director Laura Quebral said, “This investment is a testament to the enduring, collaborative work being done by the anchors of the Michigan Street African American Heritage Corridor Commission. It also illustrates New York state's dedication to east Buffalo along with the funding partners of East Side Avenues and the Regional Revitalization Partnership. It supports the community-driven, comprehensive strategic and economic development plans launched last year by the commission, and is part of a cohesive effort to ensure the corridor's successful transformation into a unique, historic, inspirational place for residents and tourists alike."

Terry Alford, executive director of the Michigan Street African American Heritage Corridor Commission, said, “The strategic planning and the work of the corridor anchors, along with community support and dedicated funding, are helping to make our visions a reality. We are proud of the corridor’s growth and there is more to come.”

New York State Sen. Tim Kennedy said, "For more than 50 years, Bishop William Henderson presided over the Michigan Street Baptist Church, and actually saved the church – an iconic and irreplaceable piece of Buffalo’s history – from demolition. As we celebrate this milestone, we know he is with us in spirit. It’s fitting that we open these doors on a day honoring Dr. Martin Luther King Jr. Both Dr. King and Bishop Henderson inspired a new generation of engaged citizens, and encouraged them to not only move our community forward by looking ahead, but by preserving the history that has led us to this very moment."

Assembly Majority Leader Crystal Peoples-Stokes said, "To God be the glory, it has been a long time in the making, and this day has finally come. Congratulations to Lillie Wiley-Upshaw and the Buffalo Niagara Freedom Station Coalition, the Michigan Street African American Heritage Corridor, and a huge thank you to the Community Foundation of Greater Buffalo for keeping this historic structure upright long enough for Empire State Development, State Parks/SHPO and others to provide the necessary funding to complete this first phase of construction. It's very fitting that this announcement happen on MLK Jr. Day, given the church's involvement in social justice advocacy efforts."

City of Buffalo Mayor Byron Brown said, “The changes taking place here at the Michigan Street Baptist Church are just some of the many positive improvements that are coming to the African American Heritage Corridor and east Buffalo. I want to thank Gov. Kathy Hochul for her continued support and investment in our community.”

Erie County Executive Mark Poloncarz said, “The Michigan Street Baptist Church has been a beacon of hope to generations of African-Americans, from providing comfort and solace to people escaping slavery before the Civil War to serving as a community hub for well more than a century. This historic structure is an integral part of the African-American experience in Erie County, and we are doing all we can to preserve and protect it for future generations.” 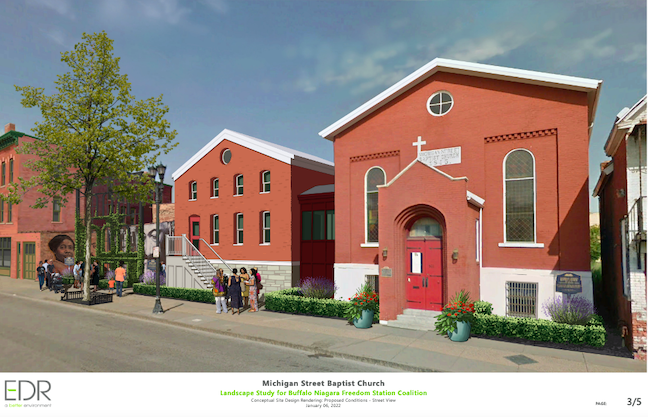 In 2001, the Buffalo Niagara Freedom Station Coalition, a not-for-profit organization, was created to protect and promote the Michigan Street Baptist Church building as a beacon of freedom; to tell its story from its founding in 1845 to today; and to inspire and educate future generations. With the help of community stakeholders, they tell the unique stories of the African American experience in Buffalo, to enrich and illuminate the larger African American narrative. In particular, the board focuses on the church’s roles in the Underground Railroad, the formation of the Civil Rights Movement and other chapters of American history related to the struggle for individual liberties. The church remains operating as a church as part of the “Light of the World Missions,” and as a historic landmark, a beacon for the community in the revitalization process envisioned as part of the African American cultural heritage tourism for the corridor. More information can be found at michiganstreetbaptistchurch.org.

East Side Avenues is a unique public/private partnership that provides capacity building, funding and organizational support to complement five specific initiatives along Bailey, Fillmore, Jefferson and Michigan avenues. Understanding the tremendous opportunity to leverage New York state’s $65 million East Side Corridor Economic Development Fund, private and philanthropic organizations created a pooled $8 million to support these capacity building activities. East Side Avenues brings together these public and private funders, community nonprofits, anchor institutions, consultants and the city to plan and coordinate revitalization activities aimed at improving economic conditions on Buffalo’s east side. The East Side Avenues Project Implementation Team is led by University at Buffalo Regional Institute, ensuring that appropriate supports such as infrastructure, staff and funding are in place; assisting with strategic planning, program design and problem solving; and reporting on progress. For more information, go to www.EastSideAvenues.org.