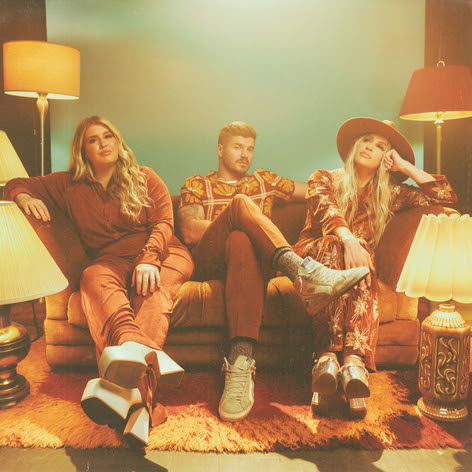 Presale begins today, while first single and live video are out now

2022 was quite a year for the award-winning sibling trio CAIN, and 2023 is set to be even busier with new music out next month and their first headlining tour kicking off this spring.

“Honest Offering” features the writing of award-winning songwriters and artists including Chris Tomlin, Jason Ingram, Ethan Hulse, Micah Kuiper, Nick Schwarz, Jonathan Smith and Mitch Wong. Wong also shares his vocals on "Shine On Us," while David Leonard appears on "Blessed Assurance." Touted as their most personal collection of songs yet, the album was produced by Smith, Brad King and Leonard, and was recorded live at Nashville's legendary Ocean Way Studio.

“Honest Offering” is also a project CAIN has been wanting to make since their childhood, especially as teens when the Cain family would host high school Bible studies.

"We'd pack so many in our family room and just sing to Jesus," Madison Cain Johnson shared.

Now singing as their careers, the siblings knew it was time to record some of their favorite worship songs along with sharing a few new ones.

"Our hearts need this," Madison said. "It’s something that has been on our hearts to do, and I can’t believe we actually got to do it!"

Logan Cain said, "This feels different to me than anything we've done before. It's so personal."

"We hope that this is a time that people can get lost in the songs and really connect with God," Madison added. "That is more than we can hope for, more than people just liking the songs or enjoying themselves. We really hope that people get to encounter the living God."

The members of CAIN are also ready to embark on their first-ever headlining tour this spring. Joined by Katy Nichole and Leonard, the "Live And In Color Tour" will kick off in March. Click HERE for more information to find a city, and the assigned tour color, nearby.

The music of CAIN quickly became a mainstay at radio since their debut single "Rise Up (Lazarus)" was released in early 2020. Raised in Hartselle, Alabama, as pastor's kids and now residing in Nashville, CAIN – Madison Cain Johnson, Taylor Cain Matz and Logan Cain – got their first break opening for Dave Barnes and Andrew Ripp at a show in 2012. Now a decade later, they've toured with Zach Williams, Casting Crowns, TobyMac, on the K-LOVE Christmas Tour, and performed on the Grand Ole Opry stage. They are headlining their first tour, “The Live And In Color Tour,” this spring.

A press release explained, “It has been said that you if spend five minutes with the members of CAIN you’ll feel like you’ve spent the afternoon in the sunshine. Their joy spills over onto each person they meet, their bright smiles as contagious as their stunning harmonies. Pouring their joy into their music, CAIN has discovered what it’s like to live their calling while doing their favorite thing – singing about Jesus.”