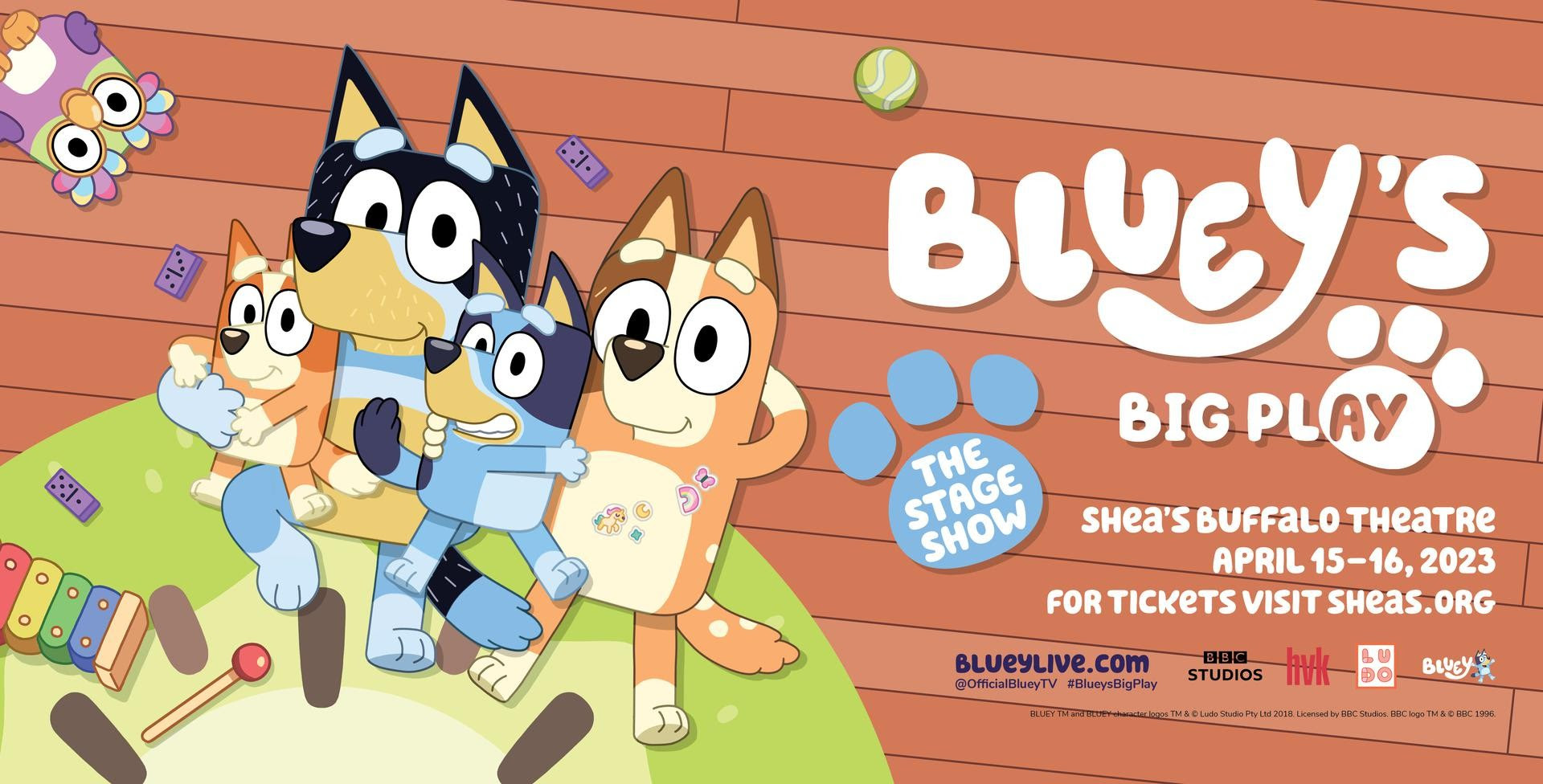 Grab the sticky geckos, break out the duck cakes, and alert the grannies! It’s time to meet the much-loved Heeler family, who will be coming to Shea’s Buffalo Theatre April 15-16 with the “Bluey” live show, “Bluey’s Big Play The Stage Show!” The Emmy Award-winning animated preschool series, which airs on Disney Junior, Disney Channel and Disney+, will be “taking the show on the road” to Shea’s with four shows: 11 a.m. and 2 p.m. Saturday and Sunday.

Tickets are on sale at sheas.org and at the Shea’s box office. For groups of 10 or more, contact Mary Oshei at 716-829-1153 or [email protected]. Presented by Shea's and Albert Nocciolino.

A press release noted, “Fans of all ages will get to see Bluey, Bingo, Bandit and Chilli as they’ve never seen them before, as the Heelers embark on their very first live theater show in the U.S. featuring puppetry, live actors and iconic sets. Based on an original new story written by ‘Bluey’ creator Joe Brumm, ‘Bluey’s Big Play The Stage Show’ also contains new music by ‘Bluey’ composer Joff Bush.”

Director Rosemary Myers of Windmill Theatre Co. said, “After seeing the amazing reaction the show received during its Australia run, we are delighted to bring this standout live theater show to U.S. audiences. We know how much love there is out there for ‘Bluey,’ and are thrilled and honored to translate these brilliant characters into the three-dimensional world – and to share this special experience with fans throughout America.”

“Bluey’s Big Play The Stage Show” is presented by BBC Studios and Andrew Kay in association with Windmill Theatre Co. The stage show enjoyed much success in the home market of Australia, where it premiered in Bluey’s hometown (Brisbane), and went on to perform 447 times across 65 venues, including the Sydney Opera House.

The series follows Bluey, a 6-year-old Blue Heeler dog who loves to play and turn everyday family life into extraordinary adventures that unfold in unpredictable and hilarious ways, bringing her family, friends and community into her world of fun.

Bluey has won the hearts of kids and parents around the world since it first launched in Australia in October 2018 and has quickly become a global hit.

In Australia, “Bluey” is the No. 1 kids show on broadcast television and is the most-watched series ever on ABC iview. In June 2019, BBC Studios struck a global broadcast deal with Disney to premiere “Bluey” in all territories outside Australia, New Zealand and Greater China; it now screens in over 60 countries. In the U.S. on Disney Junior, since March 2021, the show has been the No. 1 most-watched TV series with kids 2-6. In the U.K., “Bluey” was the most-watched show on CBeebies in January 2022 and is also available on Disney+.

“Bluey” has also won multiple awards, such as the International Emmy Kids Award in the prestigious Preschool Category in 2020, and has picked up the AACTA Award for Best Children’s Program for three years running (2019-21). “Bluey” recently won four Kidscreen Awards in February 2021.

“Bluey” is produced by multi-Emmy Award-winning Ludo Studio for ABC Kids Australia, co-commissioned by ABC Children’s and BBC Studios, and distributed internationally by BBC Studios outside of Australia.