"I thank the State Police and local law enforcement for their continued efforts to get dangerous drivers off the roads and protect all New Yorkers," Hochul said. "We will not stand for the preventable tragedies that are caused by impaired and reckless drivers, and we will continue our aggressive enforcement measures to make the roads safe for all who use them."

New York State Police Acting Superintendent Steven A. Nigrelli said, "One of the mission priorities of the New York State Police is to improve highway safety by focusing on reducing drunk and impaired driving crashes. Through our recent enforcement efforts, as well the work troopers do on a daily basis, we have made our roadways safer for the public. The New York State Police urges motorists to make safety their top priority as well to help reduce these crashes. Our message is simple: Don't drink and drive. By being proactive, we can reduce the number of motor vehicle accidents caused by drunk and impaired driving."

Department of Motor Vehicles Commissioner and Chair of the Governor's Traffic Safety Committee Mark J.F. Schroeder said, "These numbers are another sign that these efforts are working to keep our streets and highways safe. We are always proud to partner with state and local law enforcement on these campaigns, and to continue to push the message to motorists and passengers alike – if you are going to be out and celebrating, make a plan and get yourself and everyone else home safely. It's simple to do and can make all the difference."

As part of the enforcement, troopers also targeted speeding and aggressive drivers across the state. Below is a sampling of the total tickets that were issued.

The results of the campaign broken down by troop: 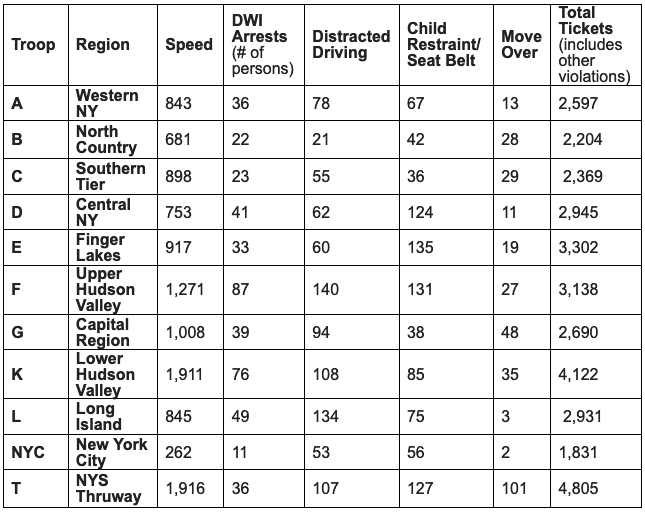