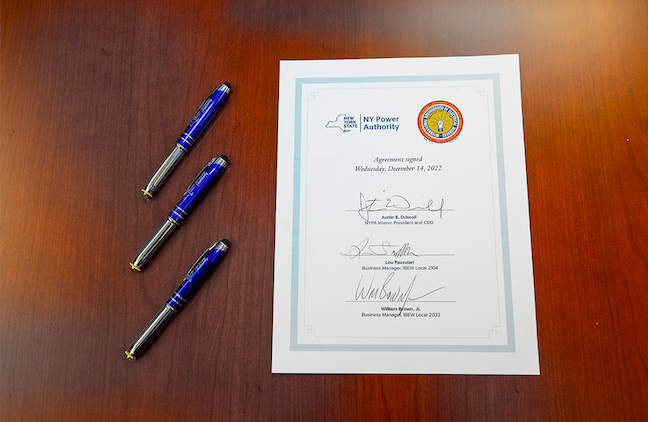 The trustees of the New York Power Authority on Tuesday approved a new, five-year contract agreement with the International Brotherhood of Electrical Workers (IBEW), a labor union representing more than 570 electricians, line persons, and other skilled craft employees at NYPA, the nation’s largest state public power entity providing nearly a quarter of New York’s electricity. Union representatives and NYPA leadership gathered Wednesday for a ceremonial signing of the contract at NYPA’s Niagara Power Project in Lewiston.

“We are very pleased to have arrived at this contract with the IBEW and to ensure the continuation of good wages and medical benefits for a vitally important arm of NYPA’s workforce,” NYPA Interim President and CEO Justin E. Driscoll said. “New York state relies on NYPA’s talented craft labor force more than ever to help advance its ambitious clean energy goals and to ensure the continued efficient, secure and reliable operation of New York’s energy system.”

The IBEW collective bargaining agreement includes wage increases that are retroactive and amount to a 17% increase over the term of the agreement, which expires in 2027. Other negotiated terms include changes to time-off provisions, retiree health care and the prescription drug plan for members who retire under this contract. 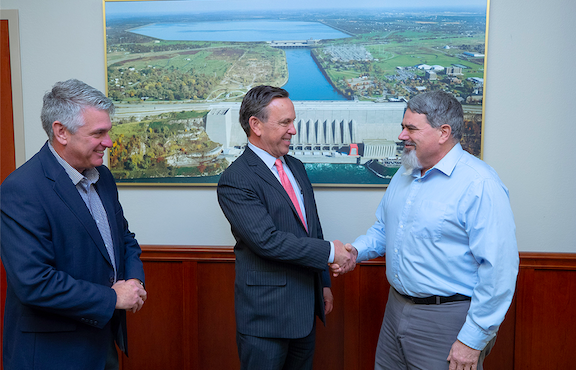 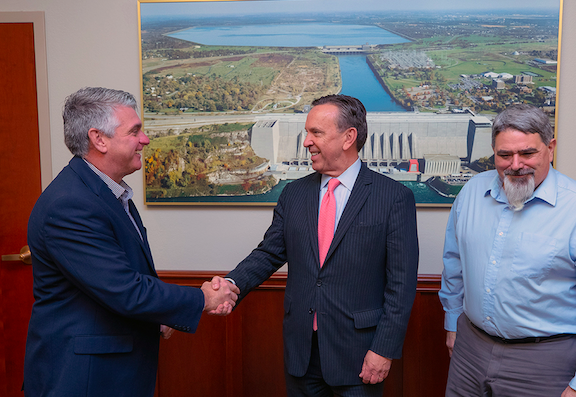 IBEW Local 2104 Business Manager Lou Fazzolari said, “The membership of IBEW 2104 continues to partner with the New York Power Authority in providing clean hydropower that helps fuel the economic development of this state. Having reached this new agreement, led by our new Interim President and CEO Justin Driscoll, we look forward to doing our part to support Gov. Hochul’s zero-emission goals.”

IBEW Local 2032 Business Manager William Brown, Jr. said, “Members of the IBEW are highly trained, dedicated professionals who have made tremendous contributions to support the production of clean, low-cost power throughout New York state. I am proud of our members and the many accomplishments and sacrifices they have made during unprecedented times. This new agreement will protect benefits and provide stability for the next five years as we work to support New York’s ambitious energy goals.”