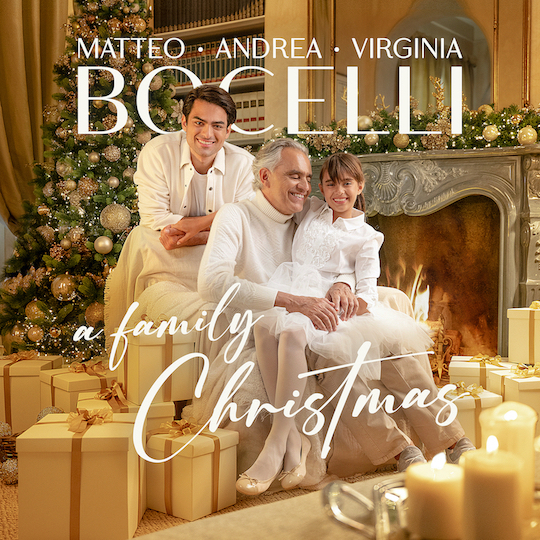 Matteo, Andrea, Virginia Bocelli & Pentatonix unveil their first collaboration, 'Do You Hear What I Hear'

Legendary Italian tenor Andrea Bocelli, his 25-year-old son Matteo, and his 10-year-old daughter Virginia have teamed up with one of the most innovative vocal groups of all time, Pentatonix, to record an inspiring new version of the festive classic “Do You Hear What I Hear” – released today on Decca / Capitol Records. The new collaboration arrives on the heels of the chart-topping success of the Bocellis’ first album together, “A Family Christmas,” which has achieved No. 1 status around the globe.

The striking rendition of “Do You Hear What I Hear” offers a modern sensibility on the 1962 Christmas classic, while retaining its sense of holiday magic. As the most celebrated classical singer in modern history, Andrea Bocelli, along with Matteo Bocelli, who has embarked on a promising solo career, and Virginia Bocelli, who made her debut performing Leonard Cohen’s “Hallelujah” in 2020 alongside her father, garnering over 15 million views, together as a trio bring an unparalleled amount of talent and heart to the family favorite. Complementing their voices perfectly, Pentatonix add their distinctive and impeccable harmonies, jointly crafting a brilliantly colorful and deeply layered song.

Listen to “Do You Hear What I Hear” and view the lyric video here.

Pentatonix’s Scott Hoying said, “Since I was a kid, I’ve always known Andrea Bocelli to be the best voice of our time, and he still has that title to this day! Not surprisingly, his children are unbelievably talented as well, and to be able to sing with such an iconic family is a lifelong dream come true for all of us.”

Andrea Bocelli is currently touring the U.S. along with Matteo and Virginia in support of “A Family Christmas,” sharing the magic of their family’s music with thousands of fans across the nation. Tickets for the run, which includes a Dec. 14 show at New York’s coveted venue, Madison Square Garden, are available at https://www.andreabocelli.com/tickets.

On Dec. 15, The Bocelli Family will appear on “Live with Kelly and Ryan” and “The Tonight Show Starring Jimmy Fallon.” Also on Dec. 15, a new short “The Simpsons meet the Bocellis in ‘Feliz Navidad’ ” will launch exclusively on Disney+. In the upcoming short from “The Simpsons,” Homer surprises Marge with the ultimate gift: an unforgettable performance from Andrea Bocelli and his children Matteo and Virginia.

The Bocelli Family’s TBN Christmas special will premiere on Dec. 16, and they’ll perform with The Young People’s Chorus of New York on CBS “Sunday Morning” on Christmas Day. Watch for Matteo Bocelli’s performances on “Fox & Friends” on Dec. 16 and 25. The family kicked off their series of television appearances with an interview on CBS’ "Sunday Morning" and a performance on NBC’s “90th Annual Christmas in Rockefeller Center.”

Each family member gets a chance to shine on their first album together, “A Family Christmas” (Decca / Capitol Records), which is currently the top-selling holiday album in the U.S. In addition, it is the highest-charting new holiday album on the Billboard 200 and Billboard’s Top Holiday Albums tally. Produced by composer and multi-Grammy and Academy award nominee Stephan Moccio (Celine Dion, The Weeknd, Miley Cyrus, Barbra Streisand), the record captures the Bocelli festive spirit in full flow.

Listen to “A Family Christmas” here.

Pentatonix reimagine, reinvigorate and redefine a cappella. Since emerging in 2011, the three-time Grammy Award-winning vocal quintet have reached unprecedented heights, selling 10 million albums worldwide, generating billions of streams and toppling charts with a catalog boasting back-to-back No. 1 albums. Following the release of their 2021 album, “Evergreen,” which tallied over 100 million streams and recently earning the group a Grammy nomination for “Best Traditional Pop Vocal Album,” Pentatonix launched one of their biggest tours to date, “Pentatonix: The Evergreen Christmas Tour.” Pentatonix’s most recent album, “Holidays Around the World,” was released on Oct. 28, and notably marked the group’s ninth Top 10 entry on Billboard’s Top Holiday Albums Chart.

The group is currently out on their largest Christmas music tour yet, selling out arenas across the U.S. Reaching fans everywhere, Pentatonix also premiered their holiday special, “Pentatonix: Around the World for the Holidays,” on Disney+ this December. In 2022, it was announced the group will be receiving a star on the Hollywood Walk of Fame.