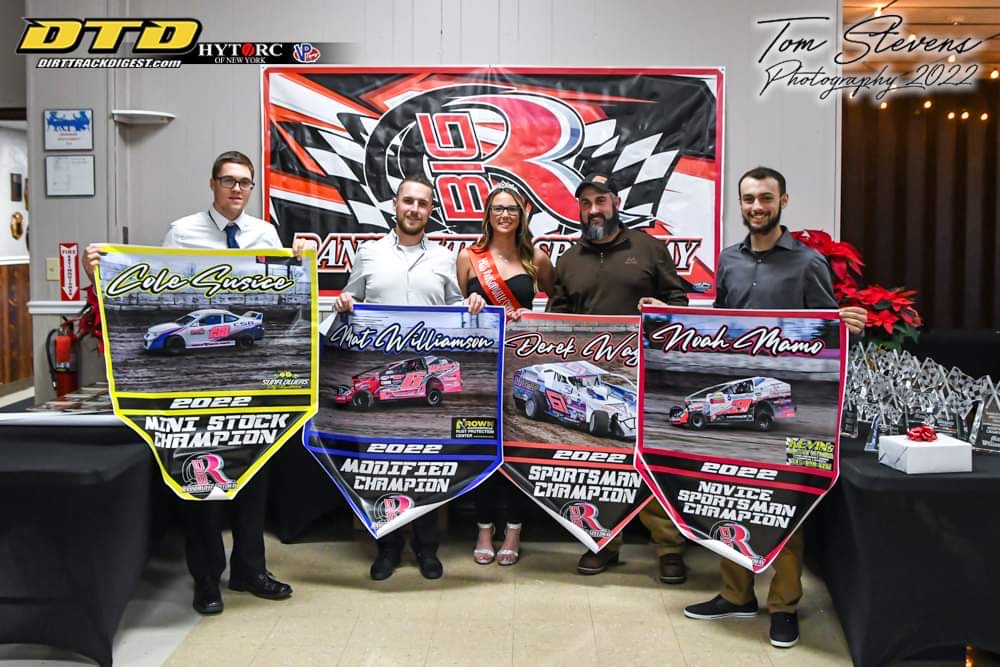 Noah Mamo of Ridgeway, Ontario, was the Kevin’s Carpet Cleaning Novice Sportsman track champion. He had five victories this season. Colby Adamczak also won five times. Aden Harris won twice, while Abby Castile, Dillon Adamczak and Kasey Coffey each won once. Castile had the division’s best appearing car. Twenty-two different drivers competed in the entry-level division this past season, the most for any Novice Sportsman division in the region.

The 2022 complete point standings are available online, by clicking on the points tab at www.ransomvillespeedway.com.

Sprint cars returned to the Big R for two races in 2022, with Parker Price-Miller winning the Tezos All Star Circuit of Champions event on July 8. Matt Farnham earned the popular win with the Empire Super Sprints by winning the Ron Lux Memorial.

The Driver of the Year went to Sportsman track champion Derek Wagner. Bubby Pawlak was named Owner of the Year. John Cocco was named the Pat Spina Mechanic of the Year. Cocco has served as crew chief and crew member for Scott Kerwin and Mat Williamson for several seasons. The Hard Luck Award recipient was John Smith.

The Key Player Award went to Office Manager Lynda O’Keefe for her years of dedication and service to the Ransomville Speedway. Brett Senek was named the 2022 Trevor Wilkins Hard Charger Award. Chad Brachmann was the recipient of the Ray MacIver Sportsmanship Award. The Performance Award went to Modified champion Mat Williamson.

Speedway management gave an update on what is happening at the speedway over the winter months and plans for the 2023 season – which will get underway on Friday, May 5.

Officials said look for the 2023 schedule and rules to be released in the coming weeks. Follow Ransomville Speedway on social media for all updates, as well as the speedway website, www.ransomvillespeedway.com.