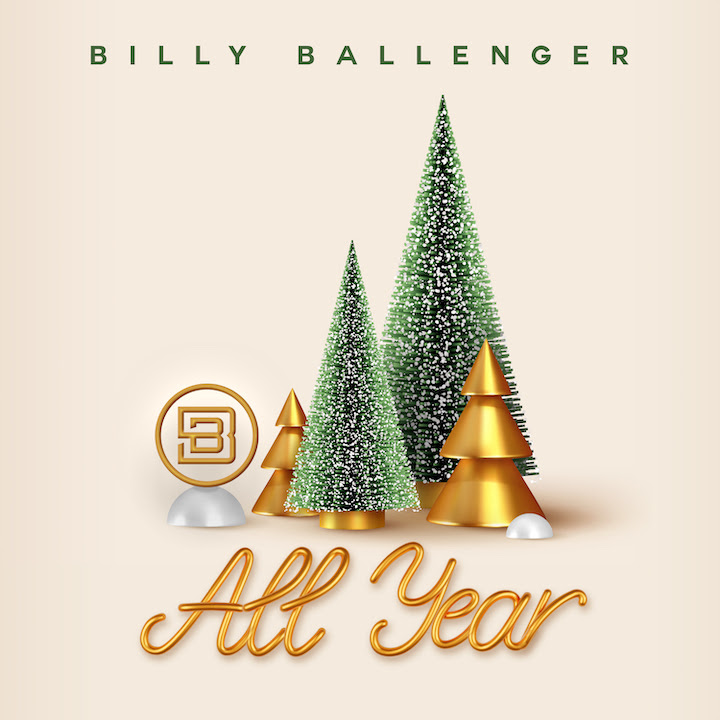 Offering “a timely reminder that the spirit of Christmas is alive every day,” acclaimed singer/songwriter and speaker Billy Ballenger’s aptly titled “All Year” is now available. The three-song EP was produced by Riley Friesen and features the message-driven title-cut, as well as two new interpretations of Michael Card’s Christmas classic, “Joseph’s Song.”

Co-written by Ballenger and Friesen, “All Year” is described as “a joyful pop anthem showcasing the heart of the gospel: “Every laugh, every smile when we celebrate/is a love that’s a gift that we all can take/when we find out that Jesus is here all year.”

Understanding that Christmas is more than a holiday, Ballenger said he hopes the song will encourage listeners facing troubled times – no matter the season.

“It’s easier to catch the Christmas spirit during the holidays,” Ballenger said. “We can turn joy on at will just because it's that time of year again, but if you’re struggling, Christmas isn’t always a joyful season. The reality is that we are meant to have lasting Christmas joy and true hope every single day because we have a savior who is with us ‘all year.’ ”

In addition, Ballenger delivers two  renditions of “Joseph’s Song,” a classic he readily embraced as a father himself.

“It’s an absolute honor to cover this song for so many reasons,” he said. “Beautifully written by Michael Card, it speaks to the weight of Joseph’s unique situation as the earthly father of God's son. Like many of us fathers, I can relate to the responsibility Joseph must have felt to get it right in raising his child. Yet in his case, the pressure to raise Jesus well was infinitely magnified.”

A press release said, “Billy Ballenger’s powerful life story of finding redemption has riveted audiences across the globe. Following a troubled childhood, he married and became a father at the age of 18 as he pursued a lifestyle of partying, substance abuse, violence and burglary. After a SWAT team invaded their home, Ballenger and his wife, Jodie, were both sentenced to six years in prison and lost custody of their daughter. Shortly before their sentencing, the Ballengers recommitted their lives to Christ after being discipled by Billy's boss. While incarcerated, Billy studied the word and grew in his faith, and two years later, he and Jodie were released and reunited with their daughter.

“Today, his journey fuels his passion for sharing the hope of Christ with audiences around the world, including Russia and China. Ballenger's Break the Grey Inc. has produced assemblies at hundreds of schools, and he’s shared his testimony and music with more than 500,000 listeners at festivals, churches, camps and other venues.

“In 2020, Ballenger was part of the ‘Winter Jam’ lineup – Christian music’s largest annual tour – performing in 31 arenas around the country. He has released seven albums along with the EPs “Walking On Waves” (2020) and “Tree And The Nails” (2021). His story has been featured on such leading media outlets as “The 700 Club,” “Life Today” and “100 Huntley Street,” among others.