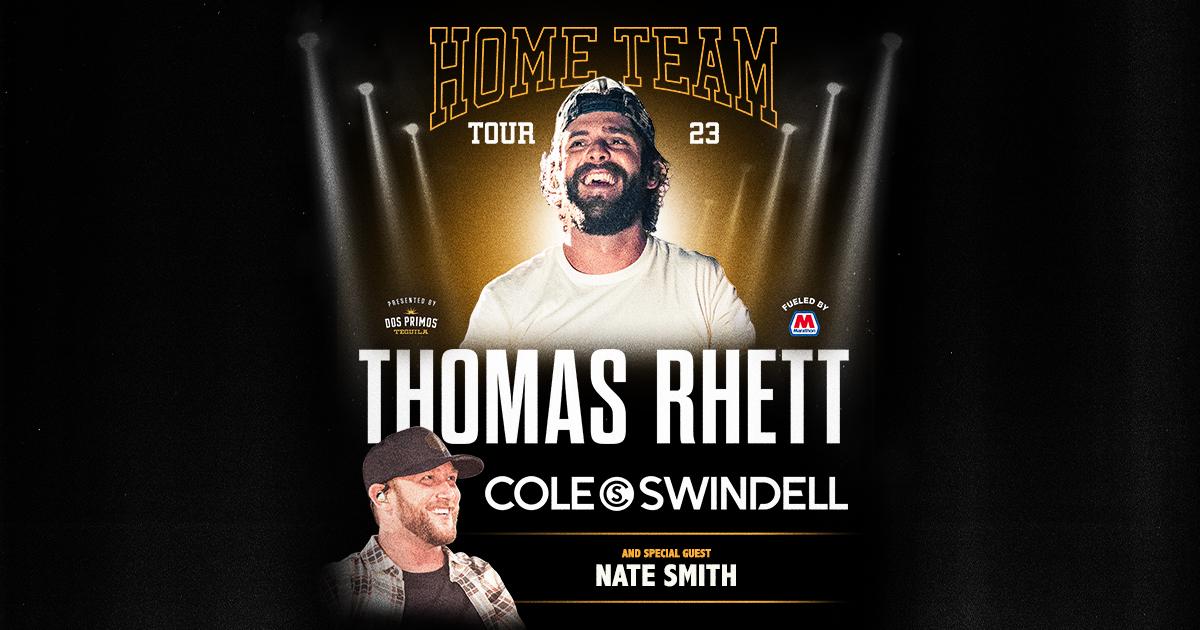 Tickets for the tour with Cole Swindell and Nate Smith go on sale next Friday, Nov. 11

Known for his "bombastic, good time energy” (Esquire), after kicking off 2023 in Canada, the summer tour will begin May 4 in Des Moines, Iowa, at Wells Fargo Arena with Cole Swindell and Nate Smith, and end at Rhett’s hometown Nashville, at Bridgestone Arena, on Sept. 23.

Presale tickets first go on sale to Home Team Members and Citi cardmembers on Tuesday, Nov. 8. The general public will have access to tickets beginning at 10 a.m. local time Friday, Nov. 11, at ThomasRhett.com.

“Being on the road is one of my favorite places to be,” Rhett said. “I can’t wait to see the joy on y’alls faces next year and with my buddies Cole Swindell and Nate Smith. We’re definitely gonna have a good time."

For the announcement, Rhett shared a light-hearted video revealing jerseys to celebrate the many tour destinations during a mock press conference. To watch, click here or below.

Ten years after signing his record deal with Big Machine Label Group’s The Valory Music Co., arena-packing superstar Rhett – dubbed “the most reliable maker of No. 1 singles in country music” (Variety) – has 19 multi-Platinum and Gold-certified No. 1 hits, 12 billion streams, and the longest current active streak of consecutive No. 1s in the format (Mediabase/Country Aircheck Chart).

Declared “a prince in the genre” (USA Today), he has been honored with eight ACM Awards, including Entertainer of the Year; two CMA Awards; five Grammy nominations; plus trophies from the CMT Music Awards, Billboard Awards and iHeartRadio Awards, in addition to being recognized with two CMA Triple Play awards for penning three No. 1 songs within a 12-month period.

Inspired by family, friends and his love of the outdoors, Rhett is also the cofounder of Dos Primos Tequila and has collaborated with Chaco on an exclusive sandal line. He recently extended his “Bring The Bar To You Tour” into 2023, with dates scheduled for the top of next year in Canada. For more information, visit www.ThomasRhett.com.

Multi-Platinum-selling superstar Swindell released his fifth studio album, “Stereotype,” to much success. The project has already charted three back-to-back multiweek No. 1 hits: the Gold-certified “Single Saturday Night,” the Platinum-certified “Never Say Never” (with Lainey Wilson); and, most recently, the Platinum-certified, five-week chart-topper “She Had Me At Heads Carolina.”

In the seven years since his debut on Warner Music Nashville, Swindell has racked up an impressive 12 No. 1 singles as an artist – 13 as a songwriter – 11 certified Platinum singles (four singles at two-times-Platinum), a Platinum-certified debut album (“Cole Swindell”) and a Gold-certified sophomore album (“You Should Be Here”). The Georgia hitmaker has over 5.2 billion global career streams. His Grammy-nominated hit, “Break Up In The End,” was named the 2019 NSAI Song of the Year.

Swindell is nominated for two CMA Awards for Musical Event of the Year and Music Video of the Year for “Never Say Never” with Lainey Wilson. He officially became a headliner on his own in 2018 with his “Reason To Drink Tours,” and is currently out on the road with Ashley Cooke and Dylan Marlowe for his “Back Down To The Bar Tour.”

With a mix of gritty backwoods soul, rock ‘n’ roll swagger and velvet-thunder vocals, Smith first chased his neon dreams to Nashville in his early 20s – but it didn’t stick. The disheartened Smith returned home and thought he was “100% done” with his artistic journey … until a crucible of change burned away the past.

In 2018, Smith lost everything he owned in the devastating camp fire that tore through Paradise, California. Although his family was safe, he struggled to cope, and turned back to music – hoping that it would help comfort himself and others. Help it did, inspiring a month-long road trip across the U.S. to Music City, writing music and playing dive bars along the way.

Soon after his arrival to Nashville, Smith released his biggest song to date, “Wildfire,” and landed a publishing deal with Sony ATV. Since then, he’s released new music including “Sleeve” and “Under My Skin,” which has amassed over 70 million on-demand streams to date.

The singer was named a “Spotify Hot Country Artist to Watch” for 2021 – an accurate prediction as he rounded out the year with a record deal with Sony Music Nashville. Smith is now making waves with his latest release, "Whiskey On You," which is Gold-certified and top 15 (and climbing) at country radio.