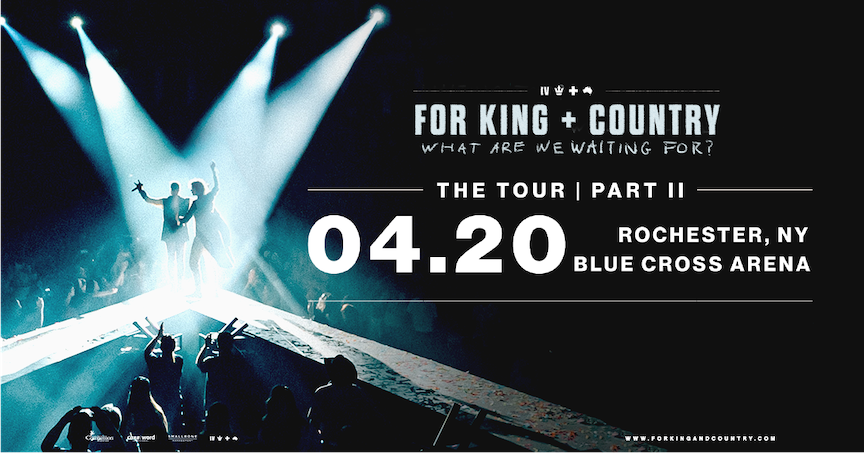 for KING & COUNTRY, "What Are We Waiting For? The Tour Part II" (Image courtesy of Kingdom Bound Ministries)

for KING & COUNTRY to bring 'What Are We Waiting For? The Tour Part II' to Rochester's Blue Cross Arena

Tickets available for presale from Nov. 1-3 for spring tour

Grammy Award-winning duo and Curb | Word Entertainment recording artist for KING & COUNTRY announce their upcoming 2023 “What Are We Waiting For? The Tour Part II,” coming to Rochester’s Blue Cross Arena on Thursday, April 20, 2023. The concert is presented by Kingdom Bound Ministries.

Tickets for the Rochester tour date can be preordered Nov. 1-3, and go on sale Nov. 4. To purchase, click here.

Brothers Joel and Luke Smallbone will continue their successful “What Are We Waiting For?” tour in 2023, featuring their latest Billboard 200 charting album, which was recently nominated for an American Music Award for “Best Inspirational Album,” a Billboard Award for “Top Christian Artist,” and was just awarded three Dove Awards.

Brothers Joel and Luke Smallbone have been awarded four Grammy Awards, 10 GMA Dove Awards, a Billboard Music Award, and 16 K-LOVE Fan Awards. for KING & COUNTRY has been nominated for three American Music Awards, their 11 No. 1 songs have produced an astonishing 1.8 billion career streams, and the RIAA Platinum-selling act’s live show has been hailed as a must-see concert event – which continues to wow sold-out crowds around the world.

for KING & COUNTRY’s “What Are We Waiting For?,” released earlier this year, became the duo’s second Top 10 album on the Billboard 200, following their RIAA Gold-certified album, “Burn The Ships.” The duo has had seven consecutive No. 1 songs, including “For God Is With Us,” “joy.,” “TOGETHER” (feat. Kirk Franklin & Tori Kelly),” and the 11-week platinum smash “God Only Knows.”

The global hitmakers have collaborated with a diverse list of artists, including Sparks, Scott, Dolly Parton, NEEDTOBREATHE, Echosmith’s Sydney Sierota, Franklin, Kelly and Timbaland, amongst others.

Joel and Luke are committed to numerous philanthropic efforts focused on human trafficking, children in need, as well as numerous programs in support of the arts.

For more information about for KING & COUNTRY, visit www.forkingandcountry.com.