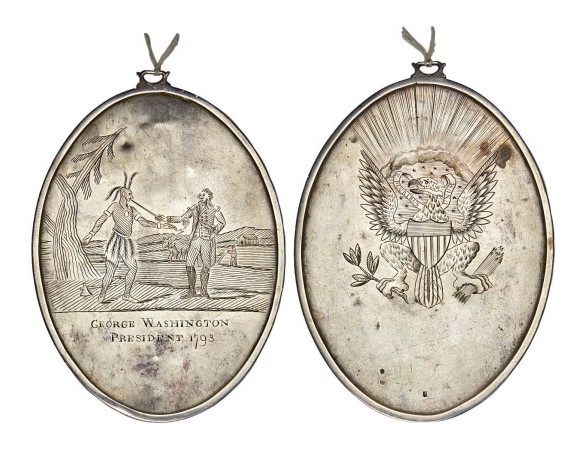 Submitted by the Tuscarora History Group

After more than 150 years and many thousands of miles, a 1793 silver George Washington Peace Medal is back home on the Tuscarora Nation.

The precious and rare medal was awarded by President George Washington to Tuscarora Nicholas Cusick (aka, Kaghnatsto), a United States Revolutionary War hero, spy, personal assistant/bodyguard and interpreter for the Marquis de Lafayette, the French leader who helped the U.S. defeat Britain.

The graceful oval medal, inscribed with President Washington’s name, an image of Native and American figures, and the seal of the United States, will be on display to the public from noon to 2 p.m. on Saturday, Nov. 5, in the Tuscarora Nation House, 5226 Walmore Road, Lewiston.

The prestigious medal had been removed from the Tuscarora Nation, and when it surfaced at an auction house to be sold, it lacked any documents showing its original owner. Because of a federal investigation into thefts from the Oklahoma Historical Society, out of an abundance of caution, the auction house offered to donate the medal to the Chickasaw Nation. The Nation accepted it, determined to identify its original recipient.

A thorough investigation headed by Lead Researcher Mitch Caver and Archaeologist Brad Lieb determined that the medal was sold in the 1870s to a collector who was working on the Sac and Fox reservation in Oklahoma. The seller was documented to be U.S. Army Capt. Cornelius Cusick (War Eagle), a grandson of Nicholas Cusick.

Searches of documents going back to 1896 established that President Washington had awarded the medal to Nicholas Cusick, and other research traced its provenance after that.

Caver and Lieb’s report on the medal stated, “Authentic Washington oval medals are incredibly rare, and few to none are on exhibit anywhere.”

In December 2021, members of the Chickasaw Nation contacted the Tuscarora Nation to let them know about the existence of the Cusick Peace Medal.

Members of the Chickasaw Nation and their historian will attend the event as the Tuscarora people thank them “for allowing us to bring the Peace Medal home after more than 150 years,” said Chief Tom Jonathan. “Without their research we would not have had our medal returned.”