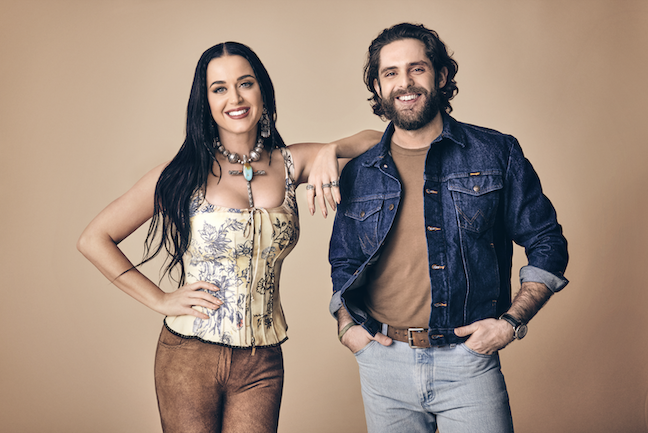 Thomas Rhett & Katy Perry reflect on 'Where We Started'

Thomas Rhett and Katy Perry on Tuesday released the music video for their duet, “Where We Started." Directed by Patrick Tracy, the video for the title track off Rhett’s sixth studio album finds each artist contently reflecting on their own journeys. To watch the two superstars at ease as their paths cross for the anthemic track, click here.

“Working with Katy has been a really collaborative process,” Rhett said. “From tracking the song in the studio, to performing it on ‘American Idol,’ to this video – her input has made this whole experience really special for me.”

Perry shared, "I loved being able to create a dreamy world for ‘Where We Started,’ going back to the Nashville singer-songwriter roots of where I started."

Ten years after signing his record deal with Big Machine Label Group’s The Valory Music Co., arena-packing superstar Rhett – dubbed “the most reliable maker of No. 1 singles in country music” (Variety) – has 19 multi-Platinum and Gold-certified No. 1 hits, 12 billion streams, and the longest current active streak of consecutive No. 1s in the format (Mediabase/Country Aircheck Chart). Declared “a prince in the genre” (USA Today), he has been honored with eight ACM Awards, including Entertainer of the Year, two CMA Awards, five Grammy Awards nominations, plus trophies from the CMT Music Awards, Billboard Awards and iHeartRadio Awards, in addition to being recognized with two CMA Triple Play awards for penning three No. One songs within a 12-month period.

The superstar’s critically acclaimed sixth studio album, “Where We Started,” is available now, with single “Half of Me,” featuring Riley Green, currently Top 5 bound at country radio. For more information, visit www.ThomasRhett.com.

Perry has racked up a cumulative 65 billion streams alongside worldwide sales of over 57 million adjusted albums and 138 million tracks. Her summer 2019 single, “Never Really Over,” off her album “SMILE,” was the biggest streaming launch of Perry’s musical career. Views of her videos “Roar” and “Dark Horse” have each surpassed 3 billion views – making her the first and only female artist to reach this milestone. Perry is one of only five artists in history to have topped 100 million certified units with their digital singles – and the first-ever Capitol Records artist to join the RIAA 100 Million Certified Songs club. Her 2015 Super Bowl performance is the highest-rated in the event’s history.

Aside from being one of the best-selling musical artists of all time, Perry is an active advocate of many philanthropic causes. In 2013, she was appointed a UNICEF Goodwill Ambassador and has used her voice to ensure every child’s right to health, education, equality and protection. She has also been a champion for LGBTQ+ equality, and has received numerous awards for her work, including the Trevor Project's Hero Award in 2012, the Human Rights Campaign's National Equality Award in 2017, amfAR’s Award of Courage in 2018, and Variety’s Power of Women distinction in 2021 for her work with her own foundation, the Firework Foundation, whose mission is to empower children from underserved communities by igniting their inner light through the arts.