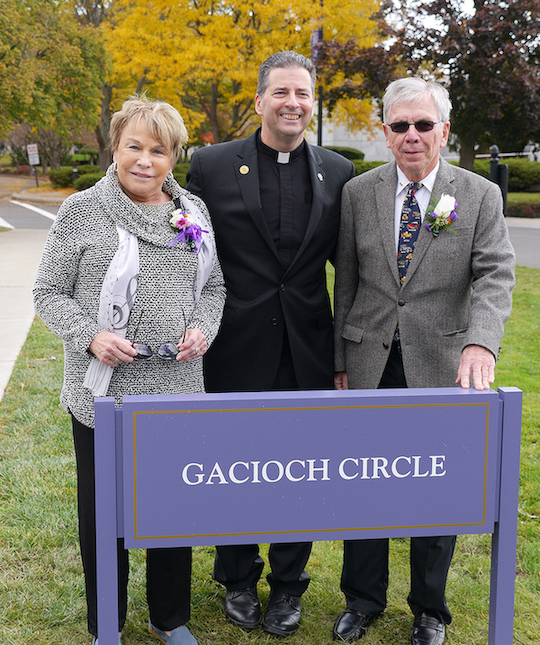 The traffic circle in the middle of the Niagara University campus was dedicated as Gacioch Circle in honor of the lifetime support of William, '61, '07 (Hon.), and Nancy Gacioch. They are pictured with the Rev. James J. Maher, C.M., Niagara University president.

William (Class of 1961, 2007 – honorary) and Nancy Gacioch have made a commitment of $3.5 million to Niagara University. The gift was announced at the dedication of the Gacioch Center for Career & Professional Development and the Gacioch Circle on Friday.

“Bill and Nancy have been incredibly generous to Niagara University, and the announcement of today’s gift further demonstrates their continued commitment to Niagara,” said the Rev. James J. Maher, C.M., Niagara University president. “We are humbled not only by their continued philanthropy, but also their commitment to students who are forging career pathways through internships and professional experiences.”

Niagara University’s Office of Career Services, which recently moved to its new location in the university’s Academic Complex, works to facilitate internship opportunities for students across every program. These crucial experiences can help students confirm their career interests, set career goals, and develop networking connections, but do not always provide compensation.

In recognition of the gift, Niagara University has renamed the Office of Career Services the Gacioch Center for Career & Professional Development. In addition, to honor their lifetime of giving to Niagara University, the university dedicated the traffic circle in the middle of the campus as Gacioch Circle.

“Today we celebrate Mr. Gacioch, his personal experience at NU, and the impact his education has made on his life,” said Jaclyn Rossi Drozd, ’08, M.S.Ed. ’10, vice president of institutional advancement. “The dedication of Gacioch Circle includes a permanent marker in a prominent location, recognizing the lifetime of support from the Gacioch family.”

Gacioch, who serves as chairman and CEO of National Property Management Associates Inc., worked in Meade Hall to fund his education at Niagara. In 2012, a $2 million gift from Gacioch and his family facilitated the renovation of Meade Hall, the former residence of the university’s Vincentian priests and brothers, into the Gacioch Family Alumni and Admissions Center. In 1999, he also contributed $1 million toward the renovation of St. Vincent's Hall.

Gacioch previously served as a member of the university’s board of trustees and has often expressed his appreciation for the education he received at Niagara by serving his alma mater both with his time and his treasure.

“Niagara University not only educates in the specialty courses you take for success, but it gives good quality character and guidance to its students, which is the most important in life,” he said.