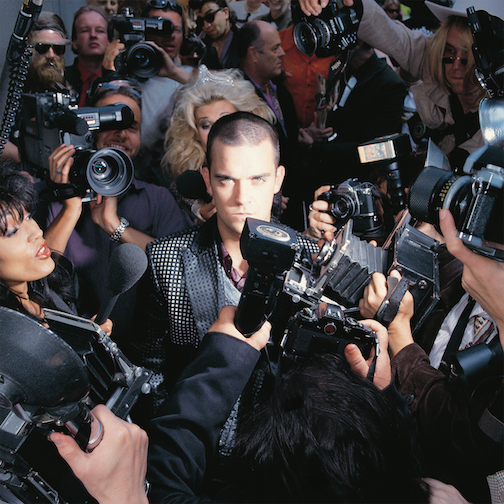 Robbie Williams announced a new deluxe edition of his multimillion-selling debut solo album, “Life Thru A Lens,” will be released Dec. 2 to celebrate the 25th anniversary of the record.

The special, expanded four-CD album, out on UMe/Island Records, combines the original chart-topping record – including the hit singles “Angels,” “Let Me Entertain You,” “Old Before I Die,” “Lazy Days” and “South Of The Border” – as well as bonus tracks and B-sides. The new edition will also feature previously unreleased demos, rehearsal recordings, and rare remixes, as well as the first audio release of the complete concert recorded at London’s The Forum in June 1998, released that November as “Live In Your Living Room” on VHS tape and VCD, but never reissued.

“Life Thru A Lens” was originally released in September 1997, spending two weeks at No. 1 on the U.K. Album Chart and 92 weeks in the U.K. Top 40. It has sold 2.1 million copies in the U.K. alone. The deluxe edition will be available in CD box set, vinyl and digital download formats. To listen to or preorder, click here.

Williams secured his 14th U.K. No. 1 album last month with “XXV,” which topped the chart in its first week of release.

His team said, “With this amazing achievement, the music icon has now broken the record for the solo artist with the most U.K. No. 1 albums – only The Beatles now have more U.K. No. 1 albums than Robbie, with 15. His total chart-topping U.K. albums across his solo work and records released with Take That now stands at 19. It places him in the top two acts of all time with the most No. 1s across their catalog, with only Paul McCartney with more.”