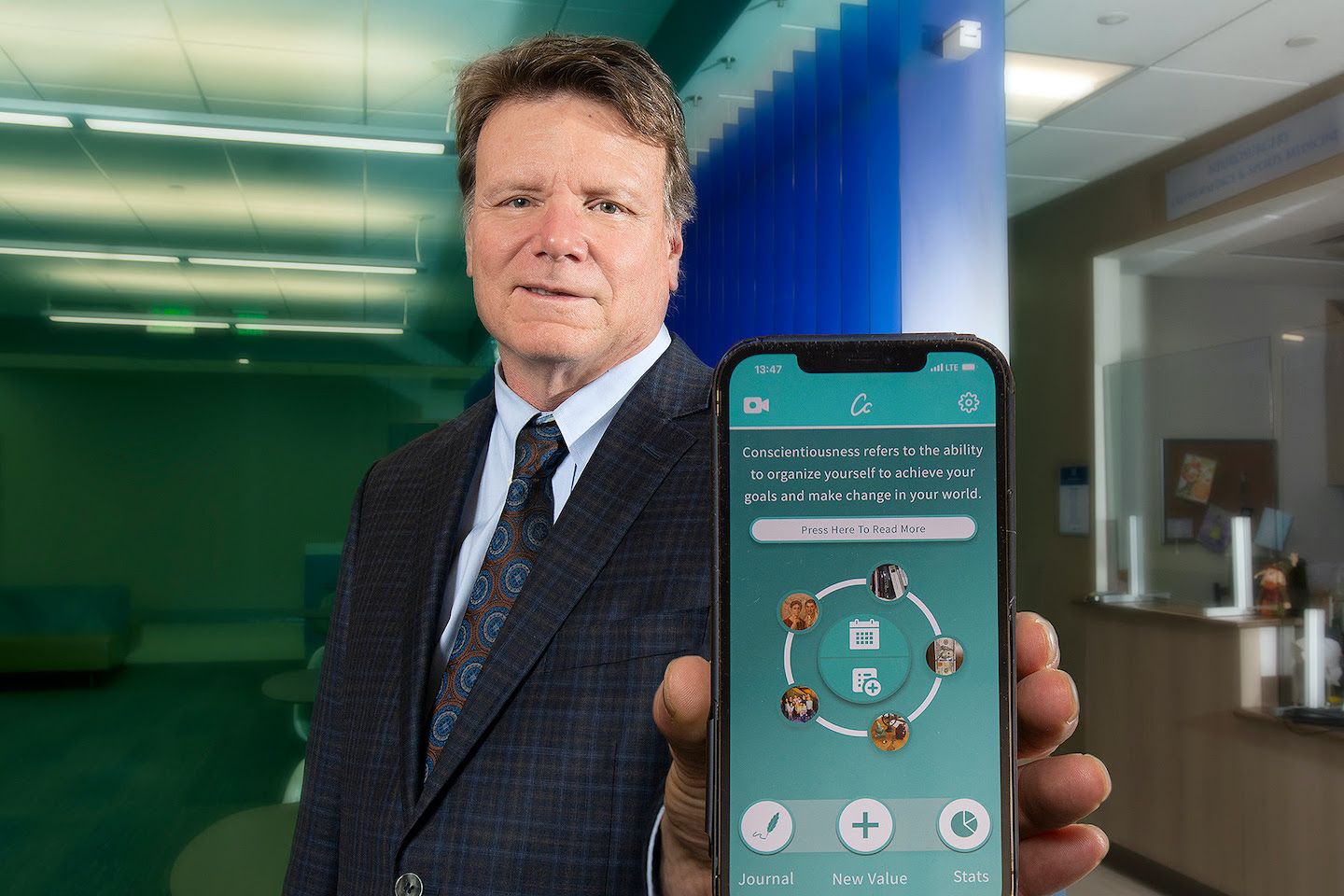 Ralph Benedict, Ph.D., a neuropsychologist in the Jacobs School of Medicine and Biomedical Sciences at UB, demonstrates the app he developed for MS patients. (Photo by Sandra Kicman)

For MS patients, an app to boost conscientiousness may help them fight cognitive decline

Multiple sclerosis patients may be better equipped to stave off the cognitive decline that the disease can cause by using a smartphone-based app now under development at the University at Buffalo.

Called the Conscientiousness CoachÓ, the app was developed by the UB neuropsychologist whose research first demonstrated a relationship between low levels of conscientiousness and cognitive impairment in MS. Similar data have been published in studies focusing on those with early Alzheimer’s disease.

One of the five established traits of personality, conscientiousness is defined as the extent to which an individual is organized, goal-oriented and self-disciplined.

Recent preliminary research by the UB team has found that such an app-based behavioral intervention can help people who are low in conscientiousness, and may even contribute to improved work outcomes. That’s significant because approximately half of those with MS lose their jobs within five years of diagnosis; up to 80% of MS patients will eventually become unemployed.

Making for a More Adaptable Brain

“Conscientiousness is that sense of ‘I’m on top of it,’ ” explained Ralph Benedict, Ph.D., professor of neurology in the Jacobs School of Medicine and Biomedical Sciences at UB and neuropsychologist with UBMD Neurology, who developed the app with his team. He has been studying the link between conscientiousness and MS outcomes for more than a decade.

“Research suggests that a high level of conscientiousness is predictive of better outcomes in neurological illness, and as such may be linked to traditional concepts of cognitive reserve, described as a kind of mental leeway built up over a lifetime that fosters resilience in the face of cerebral injury,” Benedict continued. By contrast, low levels of conscientiousness are associated with transition from mild cognitive impairment to dementia.

Benedict referred to the now-famous 2009 Nun Study that found that, despite exhibiting pathology characteristics of Alzheimer’s disease when autopsies were performed, many of these individuals never exhibited cognitive signs of Alzheimer’s while alive.

Benedict was among the first to apply that theory to MS patients regarding the cognitive decline that many of them experience with disease progression.

He and his colleagues at UB’s Buffalo Neuroimaging Analysis Center have previously demonstrated that an MS patient’s level of conscientiousness can even be a predictor of brain atrophy, with patients with low conscientiousness experiencing more neurodegeneration over a shorter period than their highly conscientious counterparts.

“I proposed that conscientiousness may be a way to think about maintaining or boosting cognitive reserve in MS,” Benedict said.

That is the philosophy underlying Conscientiousness CoachÓ, the smartphone app he and his team developed for MS patients that is now being studied in a randomized clinical trial at UB.

In an initial meeting, participants are coached to articulate their value structure, with each value (e.g., those related to family, work, hobbies, spiritual or religious concerns, cultural values, etc.) tied to a set of achievable, measurable goals. Tasks to achieve the goals are scheduled with reminders and a calendar.

“That exercise helps participants set up subordinate and tangible goals, and orients them to their value structure every day, to remind them what they are doing and why they are doing it,” Benedict said.

Subsequent meetings take place either in person or through telehealth with continued use of the customized app that has been downloaded onto the patient’s smartphone.

“In the short-term, we are teaching people how to compensate for low conscientiousness,” Benedict said. The small study published earlier this year by Benedict and his team indicated that this may be an effective approach.

“We believe the therapy is helping those low in conscientiousness to compensate, and hopefully maintain this aspect of cognitive reserve. The app is a practical tool to enhance behaviors that mimic high conscientiousness.”

Benedict is seeking funding in order to conduct larger research studies with the app.

Benedict’s colleagues on the app study are Bianca Weinstock-Guttman, M.D., professor of neurology and director of the Jacobs Multiple Sclerosis Center for Treatment and Research at UBMD Neurology; and Robert Zivadinov, M.D., Ph.D., professor of neurology and biomedical informatics, and director of UB’s Buffalo Neuroimaging Analysis Center. He has benefited from a strong team of students and research assistants, including Tom Fuchs, Michael Jaworski, Zachary Weinstock, Margaret Youngs, Celeste Santivasci and John Gillies.