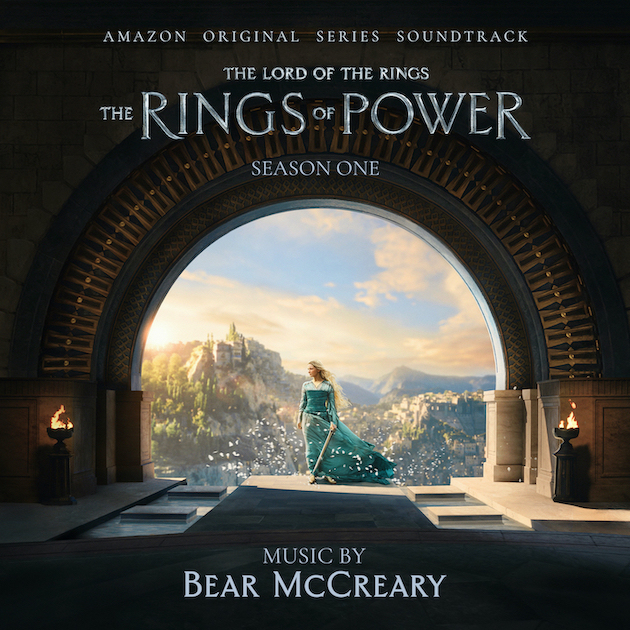 "The Lord of the Rings: The Rings of Power (Season One: Amazon Original Series Soundtrack)." (Image © and courtesy Amazon Studios publicity site)

Amazon Studios unveils 'Where the Shadows Lie,' featuring Fiona Apple, from 'The Lord of the Rings: The Rings of Power (Season One: Amazon Original Series Soundtrack)'

On Friday, Amazon Studios released “Where the Shadows Lie,” a new song performed by Grammy Award-winning artist Fiona Apple from “The Lord of the Rings: The Rings of Power (Season One: Amazon Original Series Soundtrack).” Available only on Amazon Music, the song was written by series composer Bear McCreary and appears in the season finale of the acclaimed new series on Prime Video.

Listen to “Where the Shadows Lie” (feat. Fiona Apple) here.

A press release said, “Set to McCreary’s powerful and ethereal score with Apple’s haunting vocals at the forefront, ‘Where the Shadows Lie’ is inspired by the iconic ‘Ring’-verse written by J.R.R. Tolkien in the original ‘The Lord of the Rings’ trilogy. As written, the poem was composed by the Free Peoples of Middle Earth about the origins of the Rings of Power and their relationship under the power of the One Ring.”

The song was produced by McCreary, Apple, and Andrew Slater, and engineered by Jason LaRocca and David Way.

The instrumental version of “Where the Shadows Lie” appeared in the first episode, with the intention of using the same motif for the last episode of the show’s premiere season. McCreary put together a demo crafting together his original music with Tolkien’s words giving new life to the poem. From there, the discussion of finding the perfect voice to record the song began.

“We are extremely excited to share this song with audiences around the world,” said Bob Bowen, worldwide head of music for Amazon Studios. “Fiona Apple brings her powerful and cinematic vocals to this beautiful and haunting piece of music our series’ composer Bear wrote. Her incredible performance and interpretation of this legendary text will amaze fans.”

“When we heard Bear’s incredible arrangement, we knew we needed to find a singular, world-class artist to bring it to life in the richest way imaginable,” showrunners and executive producers JD Payne and Patrick McKay said. “We are immensely grateful to Fiona Apple for doing just that and more. As longtime admirers of Fiona’s work, we are thrilled and humbled to bring her voice to Middle-earth. We cannot wait for audiences to hear ‘Where the Shadows Lie,’ and discover how it ties in with the storytelling not just in season one, but in the years to come. …”

"The musical legacy of ‘The Lord of the Rings’ brings to mind ethereal vocals carrying lyrical melodies over evocative harmonies, so it was my natural inclination to compose such a song for ‘The Rings of Power,’ ” McCreary said. “Based on J.R.R. Tolkien’s iconic ‘Ring’ poem text, I wrote the song ‘Where the Shadows Lie’ as a theme for the titular ‘Rings of Power,’ for the magic of mithril, for the sinister machinations of Sauron, and for his land of Mordor.”

He continued, “To embody all these narrative elements into one voice is no small task, and so I am especially grateful to have collaborated with legendary singer Fiona Apple. Inarguably one of the definitive musical voices of her generation, Fiona brought new depths and narrative intention to the song’s unique combination of my haunting melody and Tolkien’s ominous text. I have been inspired by her musicality for two decades, and I could not imagine an artist better suited to bring to life the mystery, majesty and power of this song. I am thrilled audiences can finally hear ‘Where the Shadows Lie,’ a song we strategically withheld from the season one album until now, so that its significance would not be spoiled in the early episodes."

Amazon Music customers who have already downloaded the soundtrack will get the previously unreleased track automatically.

The press release added, “Bear McCreary, known for his incomparable world-building and use of innovative musical approaches in the worlds of television, film and video games, guides audiences through the major events of the Second Age of Middle-earth with his ‘celestial score’ (The New York Times). Working out of the iconic Abbey Road Studios as well as AIR Studios and Synchron Stage in Vienna, he recorded and composed hours of music for the score, weaving together his original themes into a sonic tapestry for a full symphonic orchestra, alongside vibrant folk instruments and choral singers.”

“The Lord of the Rings: The Rings of Power” brings to screens for the very first time the fabled Second Age of Middle-earth’s history, set thousands of years before the events of J.R.R Tolkien’s “The Hobbit” and “The Lord of the Rings” stories. Led by showrunners and executive producers Payne and McKay, the series begins in a time of relative peace, following an ensemble cast of characters, both familiar and new, as they confront the long-feared reemergence of evil to Middle-earth.”

The multi-season drama is available exclusively on Prime Video in more than 240 countries and territories around the world, in multiple languages, with new episodes available weekly.