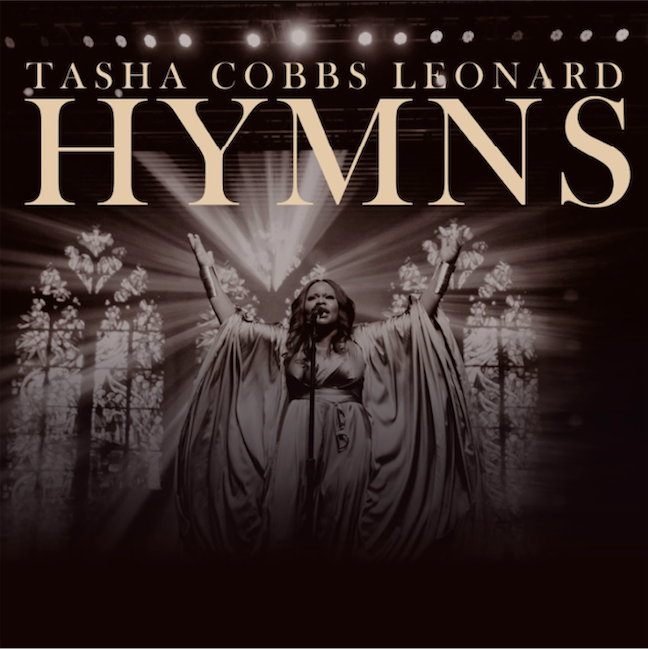 Her team said, “There's something utterly timeless about Leonard’s extraordinary new work; something at once both warmly familiar and breathtakingly fresh.

“Captured in front of a live audience of more than 3,000 at The Greenwood Oasis on the campus of New Life Southeast in Chicago, the record is a larger-than-life reimagining of classic hymns of love and grace, one that speaks to our modern world even as it reaches far beyond it. The arrangements are sweeping and cinematic, drawing on worship and gospel and even hints of country, pop, and R&B, radiating an undeniable sense of joy and fellowship at every turn. ‘Hymns’ touches all corners of gospel greatness, featuring extraordinary guests: Jennifer Hudson, Kierra Sheard, The Walls Group, Ricky Dillard, and even Mary Mary, who haven’t released music in over five years!”

Cobbs Leonard said, “I want there to be an overwhelming sense of God’s love and kindness and grace towards us in these songs. I want to remind people that, even when we feel undeserving, he sees us and we’re the apple of his eye. Through the highs and the lows, we have a consistent friend and father in God.”

Ahead of the release, Cobbs Leonard appeared on “Tamron Hall” to showcase and discuss her new LP, giving a performance of “The Church I Grew Up In” that made Hall tear up. Cobbs Leonard was also joined by her husband, Kenneth, who sat down with Hall for a candid conversation about finding purpose and keeping faith. They also dove into a conversation about how they expanded their family via adoption after struggles with infertility, and balancing their work and home life.

Cobbs Leonard recently made her debut at the legendary Grand Ole Opry, performing her 2017 hit “You Know My Name,” 2013 global sensation “Break Every Chain,” and “The Church I Grew Up In,” an offering from the new LP.

Cobbs Leonard garnered two nominations at this year's Dove Awards – Contemporary Gospel Recorded Song of the Year for her strength and perseverance anthem “Gotta Believe” and Inspirational Recorded Song of the Year for “Lift Every Voice.” She originally recorded “Gotta Believe” as part of NPR “Morning Edition’s” “Song Project,” a series launched during lockdown to provide an outlet for artists to write and perform an original song as a way to reflect the times. In an interview about the song’s origins, Cobbs Leonard opened up about some of her personal struggles, including losing family and friends to the coronavirus pandemic. NPR dubbed Cobbs Leonard a “gospel sensation.”

A pastor’s daughter born and raised in Georgia, Cobbs Leonard first emerged to widespread acclaim with her breakout 2013 release, the RIAA-certified Gold album “Grace,” which garnered a Grammy, three Doves, and three Stellar Awards on the strength of its chart-topping, Platinum-selling lead single, “Break Every Chain.” In the years that followed, she would go on to establish herself as one of her genre’s most celebrated voices, racking up more than 2 billion streams across platforms, landing three more No. 1 singles and five No. 1 albums, three additional Gold-selling singles, performing with everyone from Common and Nicki Minaj to Ne-Yo and Ciara, and making national television appearances.

Her team said, “A tireless advocate for empowerment and positivity, Leonard also broke new ground as an author, actress, entrepreneur and executive pastor at The Purpose Place Church in her adopted home of South Carolina, where she co-pastors with her husband and producer, Kenneth Leonard Jr.”