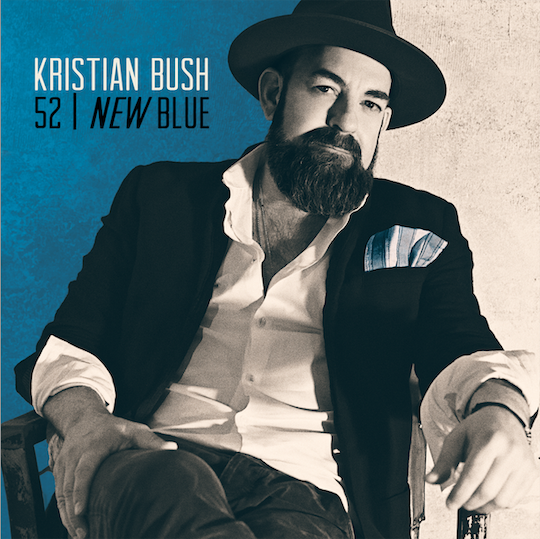 A press release said, “ ‘52-New Blue’ is where Bush's history meets his present. When creating the third collection of his four-album series, Kristian set out to create an assembly of love songs but soon realized his quest led him to the rediscovery of another love – his love of the ’90s. Bush, who found success as one half of Sugarland, is also part of folk-rock duo Billy Pilgrim, which was formed in the ’90s.

“The album name is derived from scientist Mas’ accidental discovery of a new shade of blue in 2009 while attempting to create something else. Inspired by Mas’ philosophy that ‘accidents are essential in discovery,’ and his reference to scientist Louis Pasteur’s belief that ‘luck favors the prepared mind.’

Bush said, "While looking for a way to group my songs for this next release, I stumbled on a truth. I found a ‘New Blue.’ I found that the music and attitude, lyrics and chords, and the foundation of me walking out onto rock stages in the ’90s, was woven into every Sugarland song, every solo song, every production and every co-write since. Many of the songs on this project feel like songs I would have put out in 1995."

Bush was a writer on each of the 12 songs on “52-New Blue,” and many of his co-writers fit naturally into the vibe of the project, having written popular hits in or around the decade. He teamed with talents like Billy Steinberg ("Like a Virgin," "True Colors"), Matraca Berg ("Strawberry Wine," "You and Tequila"), Billy Montana ("Bring on the Rain" and "More Than a Memory") and Chris Barron of the Spin Doctors.

"It requires only a few things," Bush said. "You need a great drummer, a big song idea, and honesty. From rollercoasters to confessions, motels to regrets, and road trips to broken promises, these songs live in my present – but are direct descendants of every song, every show and every album I touched in my past."

His team added, “Leaning into his rich experience as a true artist who has thrived in multiple formats, Kristian embraces his diverse musical legacy with ‘52’ with the final volume set to be released in early 2023. The four-installment album series is named for not only his 52nd year on this planet, but the idea of a year – split into four seasons and 52 weeks – with all four albums released within a year’s time.”

Bush also co-hosts "52 – The Podcast" weekly with acclaimed country music journalist Cindy Watts. The pair discuss the connections between his most popular songs and the new tracks on “52.” Listen here.

Bush is a multi-Platinum-selling, two-time Grammy Award-winner most known for being half of the record-breaking country duo Sugarland. The Sevierville, Tennessee, native launched his professional music career in 1994 with the folk-rock duo Billy Pilgrim. Within the decade, Bush moved on to form Sugarland with Jennifer Nettles. The pair released debut single "Baby Girl" in 2004, and went on to chart five No. 1 hits and 12 Top 10 songs.

His “Southern Gravity” solo debut in 2015 produced Top 20 hit "Trailer Hitch." Bush made a foray into television theme songs in 2016 with "Forever Now (Say Yes)," which he penned and performed for TLC's popular show "Say Yes to the Dress." The multi-instrumentalist is also a founding member of rock jam band Dark Water alongside his brother, Brandon Bush, and guitarist Benji Shanks. In addition, Bush co-wrote a song for the Atlanta staging of Stephen Schwartz's "Working: A Musical" and has written three musicals. "Troubadour" (2017) and "Darlin' Cory" (2021) opened at Atlanta's Alliance Theatre, and "Me Before You" is set for Miami in 2023.