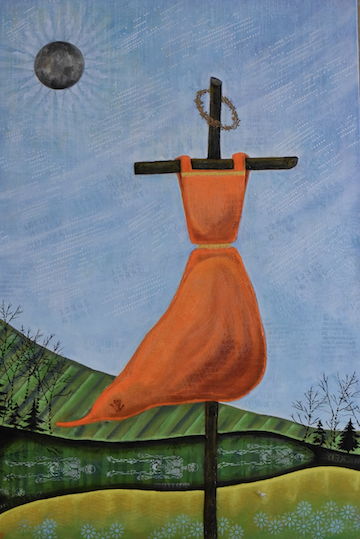 "The Red Dress Exhibit: If Only These Dresses Could Tell Their Story" image provided by Artpark & Company

Artpark presents 'The Red Dress Exhibit: If Only These Dresses Could Tell Their Story'

“The Red Dress Exhibit: If Only These Dresses Could Tell Their Story” is a limited-time exhibit, available to see Friday, Sept. 2, through Sunday, Sept. 4, in Artpark’s South Fourth Street entrance. Admission is free.

Organized by Artpark & Company, the exhibit is described as “an immersive experience featuring 13 empty red dresses hanging from trees, telling the untold stories of 13 Murdered and Missing Indigenous Women and Girls and 2 Spirit (MMIWG2S) from 13 Indigenous Peoples here in the Western New York Region.

“Each red dress will be as unique and beautiful as the MMIWG2S it represents, and the ribbons, the beadwork, appliqués and paint on the dresses will be the keepers of their story.

Artpark Indigenous Arts Producer Michele-Elise Burnett created the exhibit. She said, “As each member of an affected family and community participates in the creation of these beautiful memorial dresses, healing is happening. Every thread and fiber of the ribbons woven into the dress hold the untold story of the spirit the dress represents, essentially giving the spirit a voice – a voice that was unjustly and horrifically taken away from them.”

“Missing,” a song created by McKenzie, Lee Lewis and Gen Huitt, a Confederated Salish and Kootenai Tribes Elder, will be performed “to honor and brings attention to Indigenous Peoples who have been affected by a horrific atrocity MMIWG2S.”

McKenzie said, “Many people still don't know that Indigenous women are targets for senseless, random violence and killing, so the song ‘Missing’ was written to not only bring awareness to these hideous crimes, but to also become the voice of the voiceless ... a cry from the grave of the missing and a cry from the loved ones left behind.”

“Missing” has been nominated for a 2022 Native American Music Award.

Artpark said, “ ‘The Red Dress Exhibit’ is intended to increase awareness for the epidemic of the ongoing horrific systemic racial crimes targeting Indigenous women and girls who are victims of murder 10-times the national average; remember the lost lives of the victims; teach; give Indigenous women a voice; inspire a new, crosscultural generation based on inclusivity, compassion and love and; to collectively offer the MMIWG2S our love, gratitude create a safe, nurturing and welcoming environment for Indigenous Peoples.”