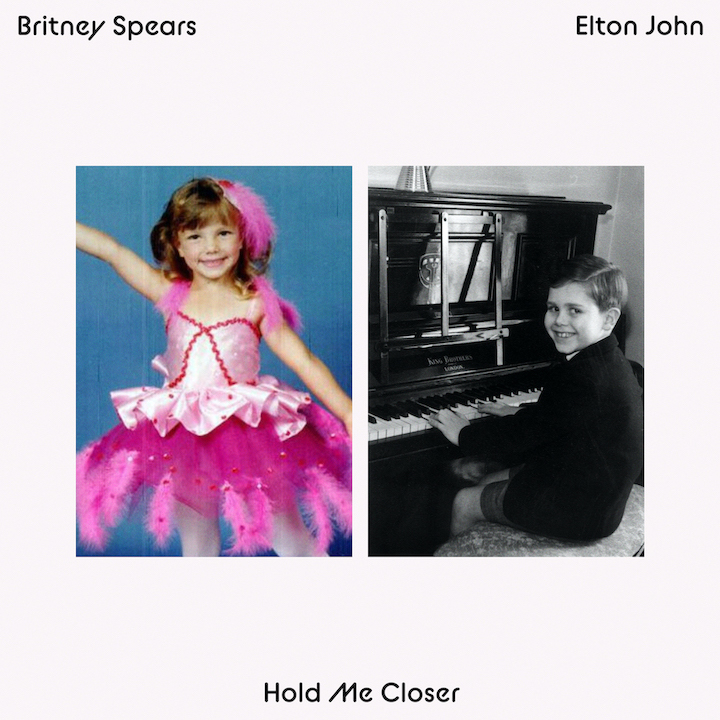 A joyous dance future-anthem dripping with summer abandon, “Hold Me Closer” sees two of the most iconic artists of all time come together for the first time ever on record. The seeds of the collaboration were sown in 2014 when the pair first met at the 22nd Annual Elton John AIDS Foundation Academy Awards Viewing Party. A subsequent tweet in 2015 from Britney professing her love of Elton’s 1971 classic “Tiny Dancer” sparked the idea for the collaboration with Elton, and the stars finally aligned this summer.

After hearing the first cut of the single earlier this summer, Elton knew Britney’s instantly recognizable vocals were the perfect touch to bring the song to life. Reaching out to her directly, Britney immediately said yes, and the result, “Hold me Closer,” holds promise to be the song of the summer.

The release of “Hold Me Closer” also marks the first new music from Britney since 2016.

Elton said, “I am absolutely thrilled to have had the chance to work with Britney Spears. She truly is an icon, one of the all-time great pop stars, and she sounds amazing on this record. I love her dearly and am delighted with what we've created together.”

Britney said, “I was so honored when the incredible Sir Elton John asked me to join him on one his most iconic songs. We are so excited for the fans to hear it! Thank you, Elton, for having me! I am so grateful that I got the opportunity to work with you and your legendary mind.”

A fantastic surprise for Elton and Britney fans around the world, “Hold Me Closer,” produced by Andrew Watt, is a refreshing contemporary twist on one of Elton’s most iconic hits, “Tiny Dancer,” which also features elements of other classic songs from his legendary catalog including, “The One,” and “Don’t Go Breaking My Heart.”

“Tiny Dancer” remains one of Elton’s most beloved songs – and one of the standout tracks off his 1971 studio album “Madman Across The Water.” Immediately striking a chord with U.S. audiences, the now triple-Platinum record reached the U.S. Top 50 song charts at the time of release – and most recently was listed in Rolling Stone’s 2022 feature story on the “500 Greatest Songs of All Time.”

Third only to “Rocket Man” and “Your Song” in global streaming numbers, the song was used to phenomenal effect and cultivated a massive popularity resurgence following Cameron Crowe’s classic 2000 film “Almost Famous.” Today, the song remains a fan favorite, taking pride of place in the setlist for his record-breaking global “Farewell Yellow Brick Road Tour.”

Elton John’s career achievements to date are unsurpassed in their breadth and longevity. He is one of the top-selling solo artists of all time. In the U.K. and U.S. charts alone, he has 1 Diamond, 32 Platinum or multi-Platinum, and 21 Gold albums, as well as over 70 Top 40 hits. He has sold more than 300 million records worldwide.

In addition, Elton holds the record for the biggest-selling single of all time, “Candle in the Wind 1997,” which sold over 33 million copies. Released in 2017, “Diamonds’ the Ultimate Greatest Hits” album, became Elton’s 40th U.K. Top 40 album and has spent over 200 consecutive weeks in the top 75 of the U.K. album charts, over 110 of these in the top 20. This release celebrated 50 years of his songwriting partnership with Bernie Taupin.

August 2018 saw Elton named as the most successful male solo artist in Billboard Hot 100 chart history. At present, he has logged 70 Billboard Hot 100 entries, including nine No. 1s and 28 Top 10s. “The Lockdown Sessions,” an album of collaborations recorded during the COVID-19 pandemic, was released in October 2021 and went straight to No. 1 in the U.K. album charts, becoming Elton’s eighth U.K. No. 1 album in the process. Its lead single, “Cold Heart (PNAU Remix) with Dua Lipa,” became a bona fide global hit, reaching No. 1 in the U.K. and Australian singles charts. Its success meant Elton became the first ever solo artist to score a U.K. Top 10 hit single in six consecutive decades. In America, he holds the record for longest span between Billboard top 40 hits at 50 years.

Elton announced the “Farewell Yellow Brick Road” tour at New York’s Gotham Hall in January 2018. Encompassing five continents, and over 350 dates, this five-year-long tour started in September 2018 and marks his retirement from touring after more than 50 years on the road. In 2019, it was named Billboard's Top Rock Tour and Pollstar’s Major Tour Of The Year. To date, Elton has delivered more than 4,000 performances in more than 80 countries since launching his first tour in 1970.

2019 also saw the release of “Rocketman” and global bestselling autobiography, “ME.” An epic fantasy musical motion picture of Elton’s life, “Rocketman” has been a commercial and critical hit, taking close to $200 million at the box office. It has won an Oscar, two Golden Globe Awards and a Critics’ Choice Award, and garnered BAFTA nominations. Its soundtrack was also nominated for a Grammy Award.

Among the many awards and honors bestowed upon Elton are six Grammys, including a Grammy Legend award; a Tony and two Oscars; a Best British Male Artist BRIT Award; induction into the Rock and Roll Hall of Fame and the Songwriters Hall of Fame; the Kennedy Center Honor; Legend of Live Award; 13 Ivor Novello Awards between 1973 and 2001; and a knighthood from HM Queen Elizabeth II for “services to music and charitable services.”

Most recently, Elton was awarded the 2021 iHeartRadio “Golden Icon” Award in recognition of his incredible influence on music and pop culture. In February, he topped the inaugural Pollstar Artist Power Index, a weekly rank of the world’s most popular artists based on streaming, touring, airplay and social media metrics.

In 1992, Elton established the Elton John AIDS Foundation, which today is one of the leading nonprofit HIV/AIDS organizations. It has raised over $515 million to date in the global fight against HIV/AIDS. In June 2019, President Emmanuel Macron presented Elton the Légion d’honneur, France’s highest award, for his lifetime contribution to the arts and the fight against HIV/AIDS. Elton was awarded the Companion of Honor in the 2021 New Year Honors list. The highest acknowledgement in the list, Elton became one of only 64 people to hold the honor.

September 2019 saw The Royal Mail issue a set of 12 stamps as a tribute to Elton being one of the most popular and enduring music artists of all time. Elton was only the second individual music artist to be featured in a dedicated stamp issue. In July 2020, the Royal Mint released an Elton John commemorative coin, the second in its music legends series to celebrate “one of the most successful and enduring artists of all time.”

Always a tireless champion of new artists, Elton has been a leading industry voice in lobbying the government for young artists visa-free touring rights in Europe post Brexit.

Multi-platinum, Grammy Award-winning pop icon Britney Spears is one of the most successful and celebrated entertainers in pop history with nearly 150 million records sold worldwide. In the U.S. alone, she has sold more than 70 million albums, singles and songs, according to Nielsen Music.

Born in Mississippi and raised in Louisiana, Britney became a household name as a teenager when she released her first single “…Baby One More Time,” a Billboard Hot 100 No. 1 smash and international hit that broke sales records with more than 20 million copies sold worldwide. It is currently 14-times Platinum in the U.S.

Her musical career boasts countless awards and accolades, including seven Billboard Music Awards and Billboard’s Millennium Award, which recognizes outstanding career achievements and influence in the music industry; as well as an American Music Award and the 2011 MTV Video Vanguard Award. So far, Britney has earned a total of six No.1-debuting albums on the Billboard 200 chart, and 34 top 40 hit singles on the Billboard Hot 100 – four of which went to No. 1. Britney has been nominated for seven Grammy Awards and won for Best Dance Recording in 2005.

Not only has Britney’s music touched the lives of millions, but she has also used her global platform and voice to support the LGBTQ+ community, from the Dream Act to anti-transgender bills in Texas. As a longtime ally of the community, she most recently received GLAAD’s 2018 Vanguard Award, which is presented to media professionals who have made a significant difference in promoting equality and acceptance of LGBTQ+ people.

After her cutting-edge pop concert Las Vegas residency, “Britney: Piece of Me,” at Planet Hollywood Resort & Casino ended in December 2017, Britney took her show on the road with a “Piece of Me” global tour in summer 2018.

Britney has been creating fragrances for over 15 years, and her scents are available in more than 85 countries around the world.