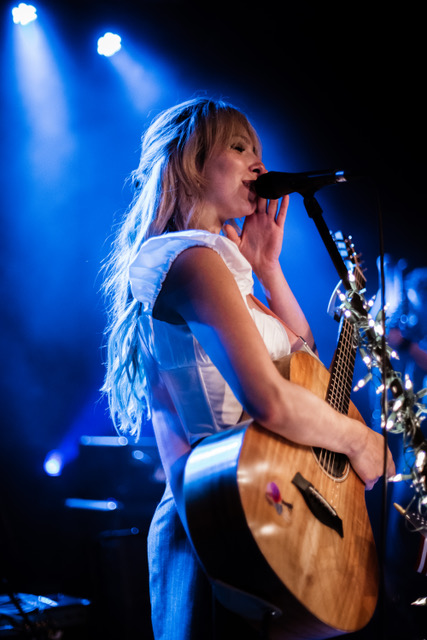 Marina Laurendi photo by Justin Ruggiero/courtesy of the singer

Singer-songwriter and Lewiston native Marina Laurendi has made it to the quarterfinals to open at one of the most legendary concert venues in Southern California, The Hollywood Bowl.

The contest is called “Opening Act,” and it gives one lucky contestant the opportunity of a lifetime to open at the epic concert, which dates back to 1922 and has featured acts including the Beatles, Billie Holiday, Maroon 5 and Shawn Mendes. The winner not only opens at The Hollywood Bowl, which is the streaming service Audacy’s biggest concert of the year, but they also take home $10,000 and receive radio exposure.

Laurendi said winning the competition would change her life.

“Being the ‘Opening Act’ would mean everything to me,” she explained. “It would make all the blood, sweat and tears worth it. To play on that stage, for thousands of people, alongside these amazing artists would be so gratifying.”

The prize money would also help expand her reach as an artist.

“I would use that money to make a full-length studio album, put out an incredible music video, and take my music to cities I’ve never been to,” Laurendi said. “That’s always been my goal – and if this is how it happens, that would really be a dream come true.”

Those who wish to help Laurendi with her quest can vote for her each day until Sept. 1 at https://theopenact.com/2022/marina-laurendi. Vote for free by selecting “verify with Facebook.”

Supporters can also sign in with a credit card to receive two free votes, or donate for extra votes, with all proceeds go to the American Foundation for Suicide Prevention.

Laurendi releases her debut EP, “Stay Mine,” this Friday on all streaming services.

Laurendi moved to New York City shortly after college to perform Off-Broadway and around the East Coast. She has taken the stage at notable venues including The Bitter End in New York City and The Hard Rock Cafe in Niagara Falls, as well as Nietzsche's and Ironworks in Buffalo.

Watch her perform at this year’s Music is Art Festival at 2:45 p.m. Sept. 10 on the floating stage.