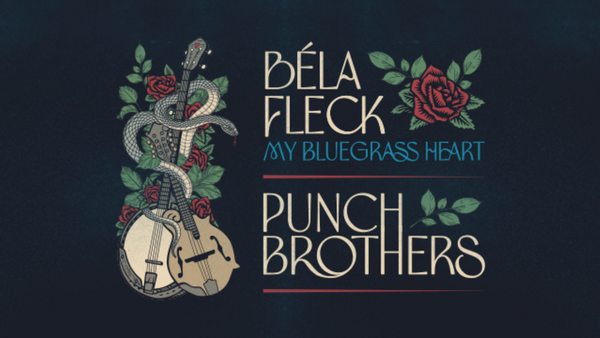 "Punch Brothers and Béla Fleck: My Bluegrass Heart" (Image courtesy of the University at Buffalo Center for the Arts)

'Punch Brothers and Béla Fleck: My Bluegrass Heart' at University at Buffalo Center for the Arts

The University at Buffalo Center for the Arts will present a special double-bill evening, “Punch Brothers and Béla Fleck: My Bluegrass Heart,” at 7:30 p.m. Saturday, Dec. 17, in the Mainstage Theatre, located at the Center for the Arts, North Campus.

A press release said, “The band of virtuosi that comprise Punch Brothers has spent more than a decade changing the face of acoustic music, stretching the limitations of their instruments and influencing a generation of young musicians, some of whom will appear with Béla Fleck as part of his set based on his 2022 Best Bluegrass Grammy-winning album ‘My Bluegrass Heart.’ Beyond the baker’s dozen of Grammy Awards and Genius Grants between them, their collective skills bring worldly rhythms and soulful jams to the stage.”

Punch Brothers are mandolinist Chris Thile, guitarist Chris Eldridge, bassist Paul Kowert, banjoist Noam Pikelny, and violinist Gabe Witcher. Their accolades include a Grammy for Best Folk Album for their 2018 release, “All Ashore,” and praise from the media, including The Washington Post, which said, "With enthusiasm and experimentation, Punch Brothers take bluegrass to its next evolutionary stage, drawing equal inspiration from the brain and the heart."

The press release added, “Over the last four decades, Béla Fleck has made a point of boldly going where no banjo player has gone before, a musical journey that has earned him 15 Grammys in nine different fields, including country, pop, jazz, instrumental, classical and world music. But his roots are in bluegrass, and that’s where he returns with his first bluegrass tour in 24 years, ‘My Bluegrass Heart.’

“ ‘My Bluegrass Heart’ is the third chapter of a trilogy, which began with the 1988 album, ‘Drive,’ and continued in 1991 with ‘The Bluegrass Sessions.’ The project features a ‘who’s who’ of some of the greatest instrumentalists in bluegrass music’s history, alongside some of the best of the new generation of players.”

This special concert marks both the Punch Brothers’ and Fleck’s return to the Center for the Arts.

Tickets go on sale to the general public at 10 a.m. Friday. Venue presale tickets go on sale 24 hours earlier. A limited amount of University at Buffalo student tickets are $25. Tickets can be purchased online at ticketmaster.com, ubcfa.org, punchbrothers.com and belafleck.com; or at the Center for the Arts box office from noon to 5 p.m. Wednesdays. For more information, call 716-645-2787 or email [email protected].