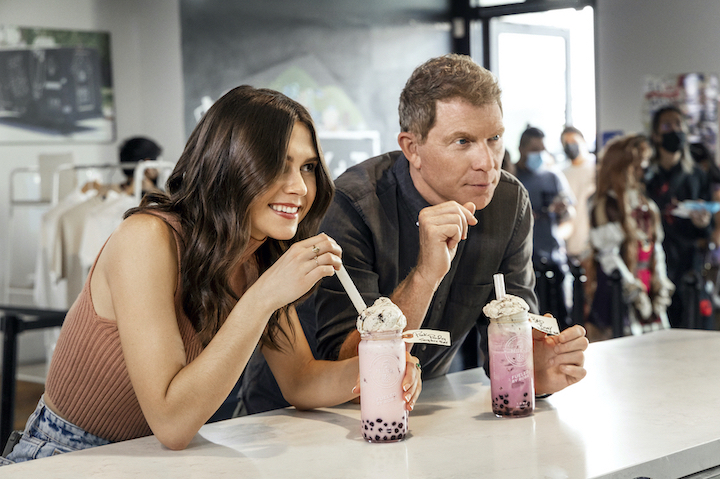 A press release stated, “In each one-hour episode, Bobby and Sophie explore Los Angeles, with its year-round sunshine and local ingredients that make the city a treasure trove for the best restaurants and chefs. From the glamorous Hollywood establishments to the urban revival of downtown LA’s hot new eateries, Bobby and Sophie are on a mission to enjoy the most inventive and delectable cuisine the city has to offer. And with so much inspiration, Bobby can’t resist using the very local ingredients to cook up his own dishes for Sophie. It’s the ultimate coastal culinary adventure, Bobby and Sophie-style!”

Fans can also watch “Bobby and Sophie on the Coast” on discovery+, with new episodes available to stream weekly starting Aug. 22.

Bobby said, “Sophie and I have always loved to use food to explore the neighborhoods we visit. Now, we have the opportunity to visit the local establishments on the West Coast and get to know the talented chefs who continue to utilize the local ingredients that reflect what LA cuisine is all about.”

Jane Latman, president of home and food content and streaming for Warner Bros. Discovery, said, " ‘Bobby and Sophie on the Coast’ is entertaining and feel-good summer programming at its best. Bobby’s adventurous spirit and culinary expertise, mixed with Sophie’s West Coast savvy as a local reporter who has her pulse on what's happening, plus delicious food, equals an irresistible series. This father-daughter duo visits the timeless restaurants and new hot spots to give viewers a taste of what Los Angeles has to offer.”

In the premiere episode, Bobby and Sophie head to the old school and new hot spots that make up Hollywood’s eclectic food scene. First up is a visit to Jitlada, as Bobby and Sophie make Thai green curry with Bobby’s friend and James Beard-nominated chef Jazz Singsanong. Next is a stop at Bobby’s favorite bakery in LA, Tartine, followed by coffee at a cat café in West Hollywood. Sophie caps off the day dining with her dad at Nancy Silverton’s new restaurant, The Barish, located inside the Roosevelt Hotel, one of Hollywood’s most notable landmarks.

Other episodes feature Bobby and Sophie exploring the restaurants in the spectacular beach towns surrounding Los Angeles, and the culinary rebirth and trendy locations that have stood the test of time in downtown LA.

Fans can head to FoodNetwork.com and visit Food Network’s social platforms to check out the best father-daughter moments from Bobby and Sophie's culinary adventure, and learn Bobby's favorite hidden spots for incredible eats in LA. Fans can join the conversation using #OnTheCoast.