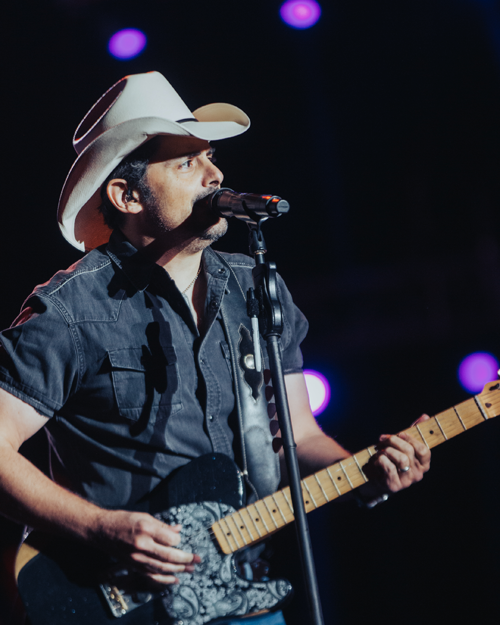 As one of country music’s most talented and decorated male solo artist’s, globally known superstar Brad Paisley launched his “World Tour 2022” with five concerts over the last two weekends. Special guests on the tour include Tracy Lawrence, Scotty McCreery, Morgan Evans, Tenille Townes, Caylee Hammack and others. The tour will continue with more U.S. shows this month before Paisley heads overseas on his ninth European tour and his first-ever tour in Australia this fall. The international shows are his first since 2019, pre-pandemic.

A portion of ticket sales will go to The Store, a nonprofit free-referral-based grocery store that aims to empower low-income individuals and families in the Nashville area. The Store was co-founded by Brad and Kimberly Williams-Paisley, and is currently serving 450 families a month. For more information, go to www.thestore.org.

In 2021, Paisley played 30-plus concert stops across the U.S., including major markets Tampa, Dallas, Houston, Charlotte, Raleigh, Chicago and Phoenix. The tour kicked off in Nashville on July 4 for “Music City’s Let Freedom Sing!” concert, breaking attendance records as 350,000 people gathered into downtown for the show.

Over the past 22 years, Paisley's songwriting and showmanship have won him numerous awards, including three Grammy Awards, two American Music Awards, 15 Academy of Country Music Awards, and 14 Country Music Association Awards (including a highly coveted Entertainer of the Year honor and recognition as the most successful CMA Award co-host in history, alongside Carrie Underwood, for 11 consecutive years). A member of the Grand Ole Opry since 2001, Paisley has written 21 of his 25 No. 1 hits, and in 2008 became the first artist to achieve 10 consecutive Billboard country airplay No. 1 singles. The superstar's past works have amassed more than 4.8 billion career streams. Forever a prolific entertainer, Paisley’s first prime-time special that aired on ABC, “Brad Paisley Thinks He’s Special,” garnered more than 18 million viewers.