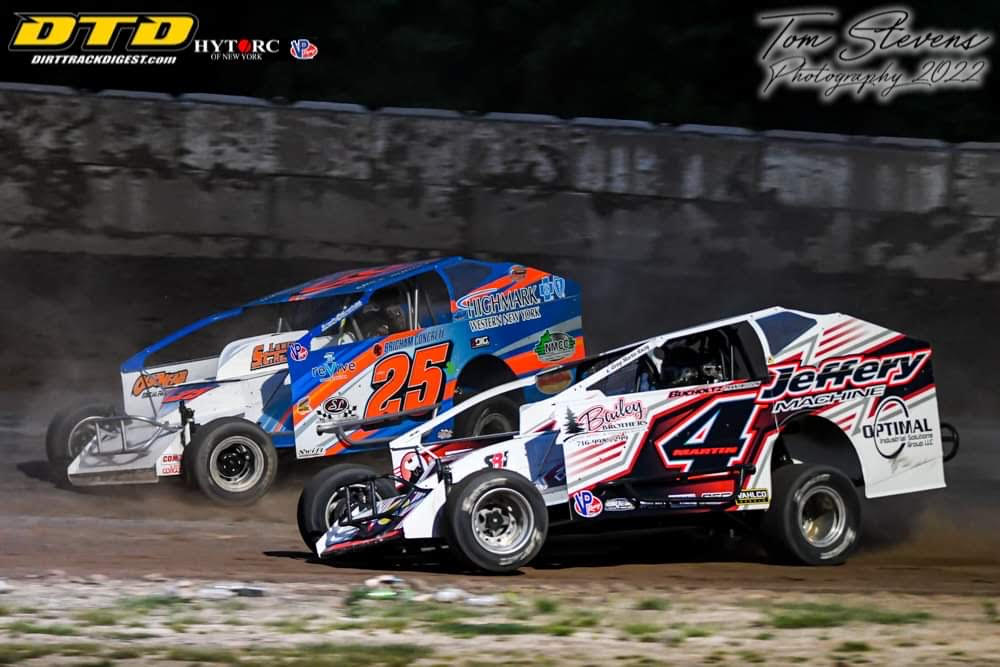 Greg Martin and Ryan Susice were on the front row for the Krown Undercoating Modified feature, with Martin leading ahead of Susice, with Chad Brachmann, Pete Bicknell and Erick Rudolph racing in the top five. Susice and Martin would battle for the lead, as Bicknell and Rudolph battled for third place. Susice would take the lead away from Martin on lap six, and Rudolph would battle with Martin for second place. Rudolph would take over the lead from Susice on lap eight after passing Susice on the outside of turn two. With the top two out front, Williamson would pass Martin with 12 laps remaining to take over third place. Rudolph would drive away from the field to pick up his first Ransomville win of the season.

Brett Martin and Dylan Duhow brought the Investor’s Service Sportsman to the green flag with Martin in the lead. Jessica Kriegisch made contact with the turn three wall to bring out the race's first caution on lap two. On the restart, Martin would continue to lead, as Brett Senek would take over second from Duhow. Scott Kerwin would move into the top three on lap 10 after passing Duhow. Martin would continue to lead, with Senek and Kerwin in tight pursuit. Kerwin went three-wide with Senek and Martin for the lead in turn three and would take over second place. The veteran Kerwin would then make his move for the lead late in the event, as he would use a late-race restart to pass Martin for the lead exiting turn two to take the lead with three laps remaining. Senek would use a late-race pass to take over second place from Martin, as Kerwin would go on to score his second win of the season.

Ken Camidge and Josh Pangrazio set the pace in the KiPo Motors Street Stock feature with Pangrazio taking the lead. Brandon Sherwood would take over second and was being pressured by John Zimmerman for the runner-up position. After a trio of cautions slowed the race, Pangrazio was able to pull away from Sherwood, Zimmerman, Pete Stefanski and Ken Camidge. Camidge would pass Stefanski for fourth place with five laps remaining. Pangrazio would go on to score his second win of the season.

Dave Dussault and Jeffery Wynes were on the front row for the Sunflowers of Sanborn Mini Stock feature, and it was Dussault showing the way, with Chris Leone, Curtis Rung, Bob Palmer and Cole Susice racing in the top five. The top seven would start to pull away from the field. Off a lap five restart, Leone would take over the lead, as Dante Mancuso would move into third place, and then, on lap nine, would move into second place after passing Cole Susice. Mancuso would take over the lead after passing Leone with four laps remaining. Mancuso would hold off Leone, Susice, Curtis Rung and Matt Hornquist.

Noah Mamo and Abby Castile shared the front row for the Kevin’s Carpet Cleaning Novice Sportsman feature, with Mamo showing the way. Colby Adamczak would take the lead away early on and started to stretch his lead over the field. Mamo would take over the lead following a lap five restart and would go on to score his first career Ransomville feature win.