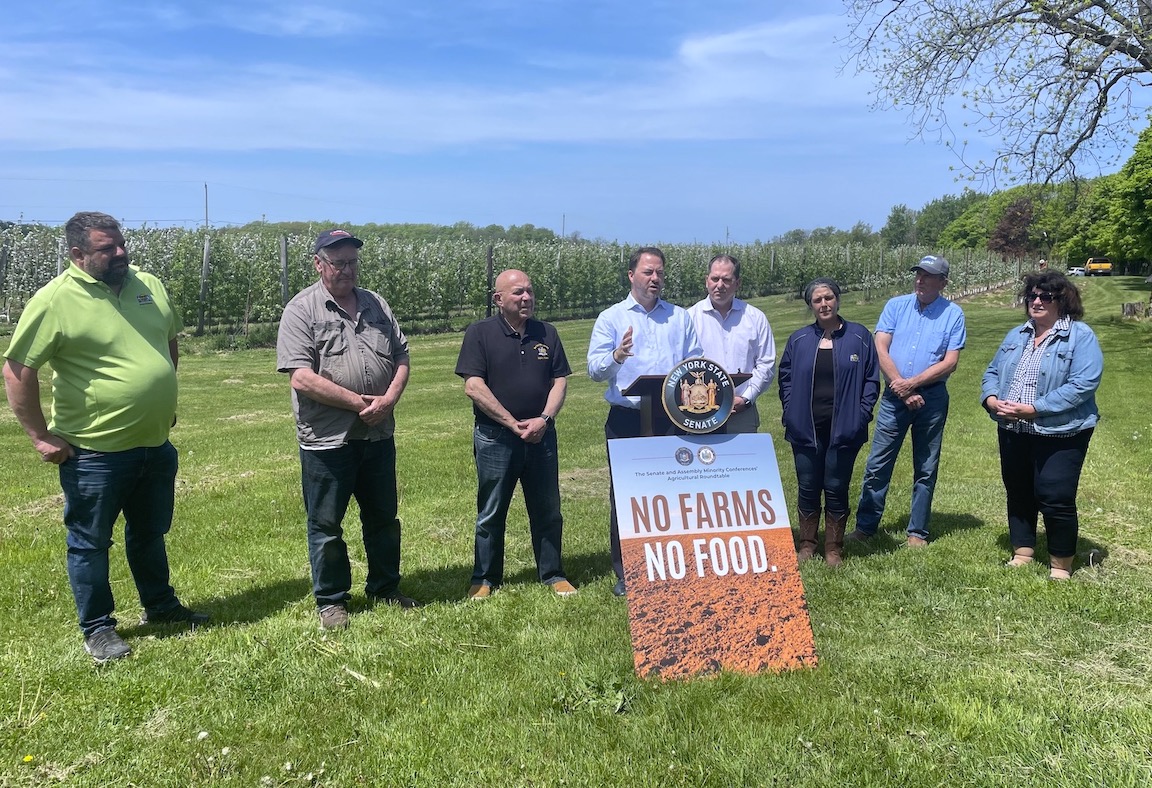 “Our family farms and farmworkers play an incredibly important role in our society,” Ortt said. “The farming industry is a unique system that works much differently than corporate 9-5 jobs. This burdensome mandate will cause farms to go under, cut worker’s hours, and jeopardize the future of New York’s agriculture industry – adding to the exodus of people leaving our state. The governor and NYS Department of Labor must reject this proposal for the future of our farms and economy.

“Bittner Singer Orchards is one of the many farms that fear the effects of lowering the overtime threshold. I’ve traveled across the district and heard the concerns of our farmers. I will continue to be their voice in Albany and advocate for the ones who know what’s best for our farms: our farmers and farm workers.”

Morinello said, “If you ate today, thank a farmer. To interfere with their expertise on how to provide food for our tables is unconscionable. Farmers know best about weather, crops, and when exactly to harvest. Attempting to categorize farms and their employees the same as other industries is an injustice that will harm our valuable farms. Lowering the threshold on overtime will have a negative impact not only on the farm’s ability to flourish, but will create a situation where farm workers will go to other states where they can make sufficiently more dollars to send home to their families. The governor and the NYS Department of Labor must reject this proposal for the future of our farms and our economy.”

Norris said, “Farms across the state have been besieged by rising costs, including energy prices, various taxes, and rising labor costs as well as the addition of costly mandates from the state, leading many farms – particularly small, family-run farms – to close, consolidate or downsize operations. As the Consumer Price Index has risen more than 8% in the last years, farmers – like all Americans – are struggling to make ends meet in the face of inflation. Families are having to make tough choices and I, for one, think our nation, and this great state, can do better. We have people who want to work, are willing to work, and there’s work to be done. This is not the time to limit hard work, entrepreneurial spirit and ingenuity by putting farmers and farm workers alike out of business.”

Assemblyman Steve Hawley said, “The idea that a week’s work on a farm can be completed within just 40 hours is entirely divorced from the weather-dependent reality of farming, where putting in extra hours is needed to either complete a harvest or save crops from the natural threats they face throughout the year. If the farm laborer overtime threshold is reduced to 40 hours, it has been projected by Farm Credit East that farmers’ labor costs could rise by as much as 42% over the next several years. Most farms already operate on razor-thin profit margins, so that spike in their expenses is one that could make the difference between maintaining their viability and making the hard decision to shut down their operations.”

Jim Bittner, president and general manager of operation at Bittner-Singer Orchards, said, “The wage board process has been a frustrating one. The farm community had an uphill battle going in, but at the same time we had hoped that the Department of Labor would at least listen to the people who actually farm and our employees. But in the end, all of that testimony fell on deaf ears. The Department of Labor did not even play all the submitted videos from both farmers and farmworkers, nor take any time to deliberate or review all of the submitted material before making a recommendation. Most importantly, testimony highlighted how farmworkers are concerned about losing hours and income, said they would have to get a second job or look for jobs on farms out of state. The very people the policy claims to help, will lose in the end.”

Niagara County Farm Bureau President Jeanette Miller said, “We appreciate the recently enacted overtime tax credit for farmers in this year’s state budget. It is clear, however, from the wage board hearings that farm workers and farmers alike believe the current overtime threshold works. Farmers and farmworkers are key to food security in New York state, especially as we continue to see negative impacts from COVID-19 and the economic downturn. Thank you to Sen. Ortt and his legislative colleagues for continuing to highlight this critical issue.”

New York State Farm Bureau board member Pat McCormick said, “We cannot afford these changes. I lost a worker because I had to cut his hours back. I know other farms who have lost workers because they are only allowed to work 60 hours. Lowering the threshold to 40 hours is going to make it harder to find labor in an already tight labor market. The governor must also remember that farm work is very time sensitive – meaning many of our workers are only here during harvesting time.”

In January, the Farm Laborers Wage Board recommended the reduction of the overtime threshold for farm laborers. Ortt called out the decision by “the unelected Albany bureaucrats” as “jeopardizing the future of New York’s agriculture industry.”

Ortt’s team said, “Several economic development and business organizations have come out and urged the governor to maintain the 60-hour overtime threshold, including the Grow NY Farms Coalition, the Business Council of New York State (BCNYS), the National Federation of Independent Businesses of New York (NFIB), and Upstate United.

“For years, Leader Ortt and the Senate Republican Conference have listened to and stood with family farmers and local New York farms and have advocated against burdensome Albany mandates, like the lowering of the overtime threshold. Last year, Leader Ortt and the conference sounded the alarm, multiple times, on the negative effects this policy would have on farmers and farmworkers alike.”

Ortt said, “New York family farms are the economic engines and lifeblood of so many local communities. No farms mean no food. We cannot let unelected Albany bureaucrats and their out-of-touch policies destroy this vital industry.”