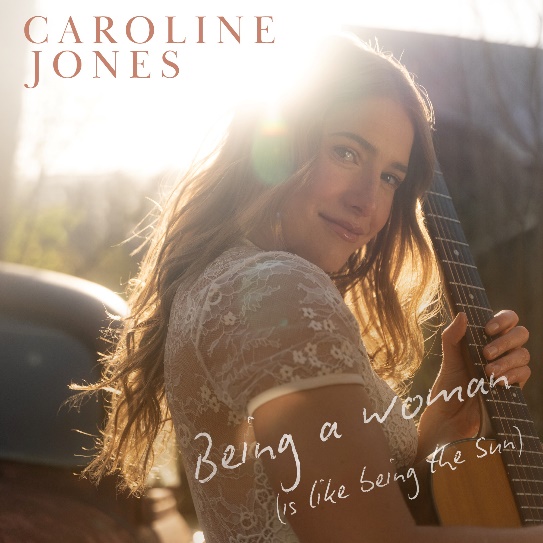 Caroline Jones, "Being a Woman (is Like Being the Sun)" (Photo credit Tracy Alison/courtesy of Sunshine Sachs Morgan & Lylis)

Caroline Jones announces new track, 'Being A Woman (Is Like Being The Sun)'

On Thursday, country-pop singer/songwriter Caroline Jones debuted her new, upbeat bluegrass track “Being A Woman (Is Like Being The Sun)” on CMT, leading up to Mother’s Day. Presave/add link here: https://found.ee/BeingAWoman.

“Being A Woman (Is Like Being The Sun)” was written by Jones, and features a group of all-female bluegrass musicians, including Grammy Award-winning artist Alison Brown (producer/banjo), Rebecca Frazier (guitar/vocals), Kate Lee O’Connor (fiddle/harmony vocal), Mary Meyer (mandolin) and Missy Raines (bass).

Jones’ team said, “The song, which was recorded at Compass Sound Studio in Nashville, is a unique telling of age-old truths of womanhood.”

She explained, “Being a Woman (is Like Being the Sun)” is about the double-edged sword of emotional intelligence and sensitivity that comes with womanhood. There is immense, life-giving power in a woman’s care and understanding of the intricacies of other’s needs. But many challenges accompany that power. As I mature, I am learning how to navigate those challenges, and trying to be intentional about the kind of woman I want to be. How do I care for those I love the most while ensuring that my own needs and desires are met? How do I communicate honestly, without being demanding or controlling, and more importantly listen with an open heart? I really, really hope that this song resonates with women and makes them feel heard and understood. And perhaps inspire men who listen to the song to appreciate and understand the women in their lives more.

“I had a vision to record this song with an all-female bluegrass band, because I knew they could bring the lyric to life in an authentic way. I am so grateful that Alison Brown resonated with this message, because I cannot think of a better producer to have at the helm for this song. Alison is an inspiration to me and countless other musicians, especially women.”

Jones is back on tour with Zac Brown Band as a special guest band member for the “Out In The Middle Tour,” which kicked April 22 and runs through Nov. 19. She first opened for ZBB on their 2017 tour and, following three consecutive years as the staple opening act, officially joined the band as a special guest band member in 2021. Highlights with the group include performing at the 2021 CMAs and opening for The Rolling Stones at Atlanta’s Mercedes-Benz Stadium. Jones is also joining the star-studded lineup at this year’s CMA Fest June 9-12, as well as performing her own solo shows this summer.

To see what’s next for Jones, or for tickets, visit https://carolinejones.com/. For tickets to “Out In The Middle Tour,” visit https://zacbrownband.com/pages/tour.

Jones is a singer, songwriter and multi-instrumentalist enriching the country scene with her unique, independent spirit. Her sophomore album, “Antipodes” (November 2021), debuted at No. 4 on the iTunes country chart, and its lead single, “Come In (But Don’t Make Yourself Comfortable),” is Jones’ first Top 40 country hit – and is still climbing the charts thanks to its viral TikTok line dance that has been played 500 million times and counting.

Jones’ skilled musicianship and addictive, foot-stomping hits have led to performances on “The Tonight Show,” “The Kelly Clarkson Show” and “TODAY,” as well as multiple appearances at the legendary Grand Ole Opry.

Perhaps most impressive about her young career, though, is the list of mentors who have taken Jones under their wing and on tour, including Kenny Chesney, Faith Hill and Tim McGraw, Vince Gill, Jake Owen, Trisha Yearwood, The Eagles, OneRepublic, and most significantly, Jimmy Buffett and the ZBB. Buffett brought Jones out on tour in 2018, signed her to a distribution deal with his Mailboat Records, and wrote “Gulf Coast Girl” for her, which he featured along with Chesney, McAnally and Lukas Nelson.

Caroline Jones is on social media at: