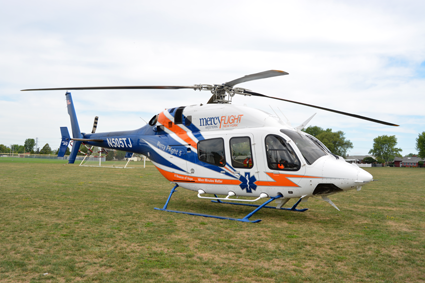 The Community Foundation for Greater Buffalo’s 21st Century Fund, a giving circle open to anyone who wants to give back in Western New York, announced its members voted to award a $100,000 grant to Mercy Flight Inc. on April 21. The grant will be used for Mercy Flight’s implementation of a lifesaving air ambulance enhancement in rural Western New York.

This project will install IFR approach systems at four strategic locations – Wyoming County Community Hospital (Warsaw), Olean General Hospital (Olean), Bertrand Chaffee Hospital (Springville), and Medina Memorial Hospital (Medina). This placement will allow Mercy Flight to create intercept points so that if someone in a roughly 15-mile radius of each IFR approach location has a traumatic injury or illness, it will be able to fly to them when weather conditions might previously have prevented it. The service area will include rural areas of Wyoming, Orleans, Cattaraugus and Southern Erie counties, serving over 500,000 residents.

“On behalf of all of Mercy Flight’s 200 employees, and especially the countless additional patients that we will now be able to reach in their time of need thanks to 21st Century Fund’s generous contribution, I extend a deep, heartfelt thank you,” said Scott Wooton, executive vice president, treasurer, Mercy Flight Inc. “Medical outcomes will be improved and lives will be saved thanks to the Community Foundation for Greater Buffalo’s 21st Century Fund, and that is no exaggeration. Mercy Flight is incredibly honored to have been granted this amazing opportunity.”

The 21st Century Fund members make a one-time charitable contribution to become a lifetime member. Every other year members come together to vote on awarding a $100,000 grant to one deserving organization for a specific project that will benefit the community. The 2020 winner chosen by the members was FeedMore WNY.

“Since 2000, we have raised over $1.2 million for the community through the generosity of our members. With the Community Foundation’s stewardship and excellent investment returns, the fund has grown to $2 million, in addition to awarding over $1 million to local organizations,” said Ted Borowiak, 21st Century Fund co-chair. “Our members tell us they really appreciate the opportunity to learn firsthand and ask questions about a number of impactful projects that nonprofits are advancing in our community. We encourage anyone interested in learning about membership to reach out to the Community Foundation.”

The next 21st Century Fund grant application process will open again in fall 2023, and another $100,000 grant will be awarded in 2024. For more information about the 21st Century Fund and membership details, visit www.21stcenturyfund.org.