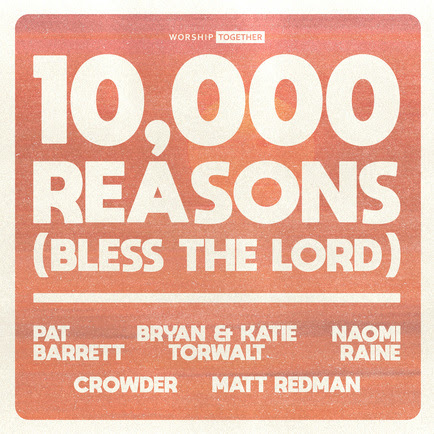 This year, the iconic worship song "10,000 Reasons (Bless The Lord)," written by Matt Redman and Jonas Myrin, celebrates a decade of impacting the world with its message. Today, Worship Together released the newly recorded 10th anniversary edition of the song, featuring Redman, Pat Barrett, Bryan & Katie Torwalt, Crowder, and Naomi Raine. The song is available here as well, as with the lyric video below.

“Just this week, I was shown phone footage of a precious family in a Ukrainian city, caught up in the horrors of war,” Redman explains. "Wrapped in winter coats and huddled together in a cold basement, still they sang out their worship – using the song '10,000 Reasons' to give voice to their hearts of faith. It was a humbling video to watch. It’s been a decade now since this simple song was released, but I don’t think I’ll ever get used to these kinds of stories. I’ve met some truly astonishing worshippers along the way – people on cancer wards or in the firing line somehow finding their way to the place of praise – and using '10,000 Reasons' as their soundtrack. I love the new 10th-anniversary version that Capitol Christian Music Group has commissioned – and it’s a joy to join friends Pat Barrett, Naomi Raine, Crowder and the Torwalts on it.”

"It’s the greatest gift as a songwriter being part of a song, a creative journey that is way bigger than yourself,” Jonas Myrin shares. " ‘10,000 Reasons’ was one of those gifts. Matt and I wrote this simple hymn in a little chapel in England, and still to this day – 10 years later – I’m still in awe of how God has used and is continuing to use this song around the world. I realized rather quickly that this was not ‘our song,’ but it’s become an anthem for people in their personal moments of celebration, praise and joy; yet also a song of comfort in times of grief, heartbreak and loss. So let it be so; through it, all, from the morning light to the setting of the sun, with grateful hearts bless the Lord, 10,000 years and then forevermore. …"

"I knew the first time I heard this song that it wouldn’t be the last," Barrett says. "Here we are 10 years later, and it’s still as relevant as it is reliable in its ability to cut through the noise and invite us to the table of communion with God. What a gift.”

Bryan & Katie Torwalt share, "It’s hard to believe that it has been 10 years since this song was released. We were worship pastors at a church in central CA when the song came out, and it has been a staple ever since. It’s a simple declaration of worship, and like David in the Psalms taught us to command our souls to praise the Lord! It was an incredible, timely song, that gave the church a new language to lift our praise. We both grew up listening to and leading Matt Redman songs in youth groups, and so to get to sing on this 10-year anniversary version of this incredible song with him and some of our friends is a huge honor!"

Worship Together is a top worship resource for the global church. Each week, Worship Together gives away free charts, lyrics and other song resources from worship leaders around the world that equip others to lead with confidence and encourage their churches.