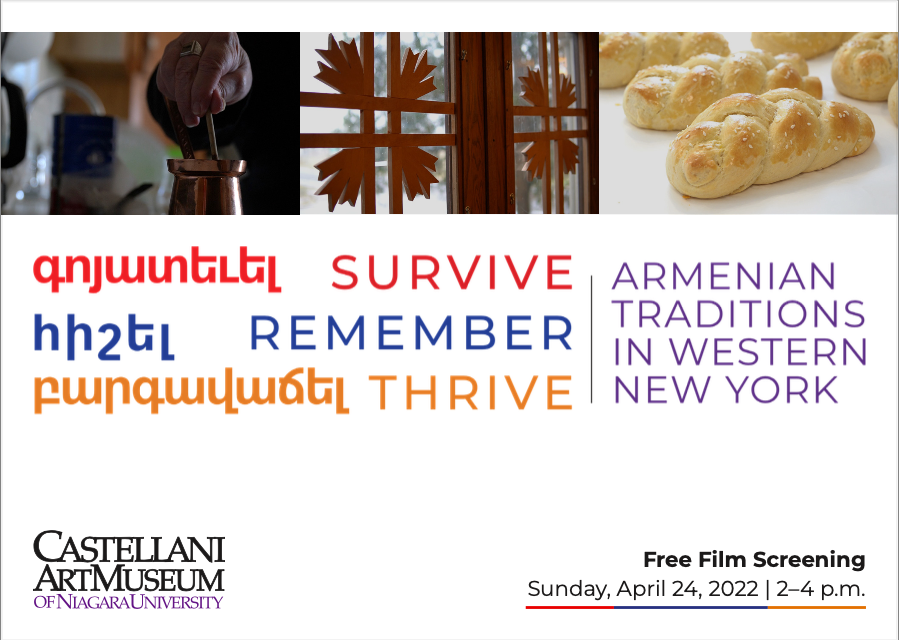 From left: Butch Kazeangin pours freshly brewed soorj (Armenian coffee) as he shares his memories about the old Armenian cafes and coffee shops in Niagara Falls. (Photo by Edward Millar, 2022). A spread of freshly baked choereg (an Armenian sweetbread associated with Easter) made by Lisa Ohanessian Mies and Lori Ohanessian Hurtgam. (Photo by Gianna Lopez, 2022.) The front doors of St. Sarkis Armenian Church were made by local carpenter Art Garabedian, and feature a central design inspired by the Armenian Cross. (Photo by Edward Millar, 2021.)

“Survive, Remember, Thrive: Armenian Traditions in Western New York” is a documentary video series celebrating local expressions of Armenian culture and heritage. The series is produced by the folk arts program at the Castellani Art Museum of Niagara University and the Buffalo Documentary Project.

A short film and five short videos will debut to the public on Sunday, April 24, from 2-4 p.m. at the Russell J. Salvatore Dining Commons on the Niagara University campus. Remarks about the project and a Q&A will take place following the screening. Light refreshments will be provided. Registration is required for this event. Visit armenianwnyfilmseries.eventbrite.com to make a reservation.

CAM stated, “The project preserves the traditions, memories and stories of the local Armenian community through a short film and video series highlighting local churches, oral history and family narratives, food traditions, family-owned businesses, artistic crafts, music and more. Documentation of local festivals and participants continues through the end of 2022, culminating with a final full release of an 11-episode series in spring 2023.”

The museum continued, “In the early and mid-20th century, Niagara Falls, New York, and the Niagara Region in Canada became home to many resettled genocide survivors. The Armenian genocide of 1915 resulted in a massive displacement of Armenian survivors and the formation of a significant diaspora refugee community throughout the world, including one that formed in Western New York. While families settled throughout the Buffalo-Niagara metropolitan area, the East Falls Street neighborhood in the City of Niagara Falls became the major hub for the local Armenian community in the 20th century.”