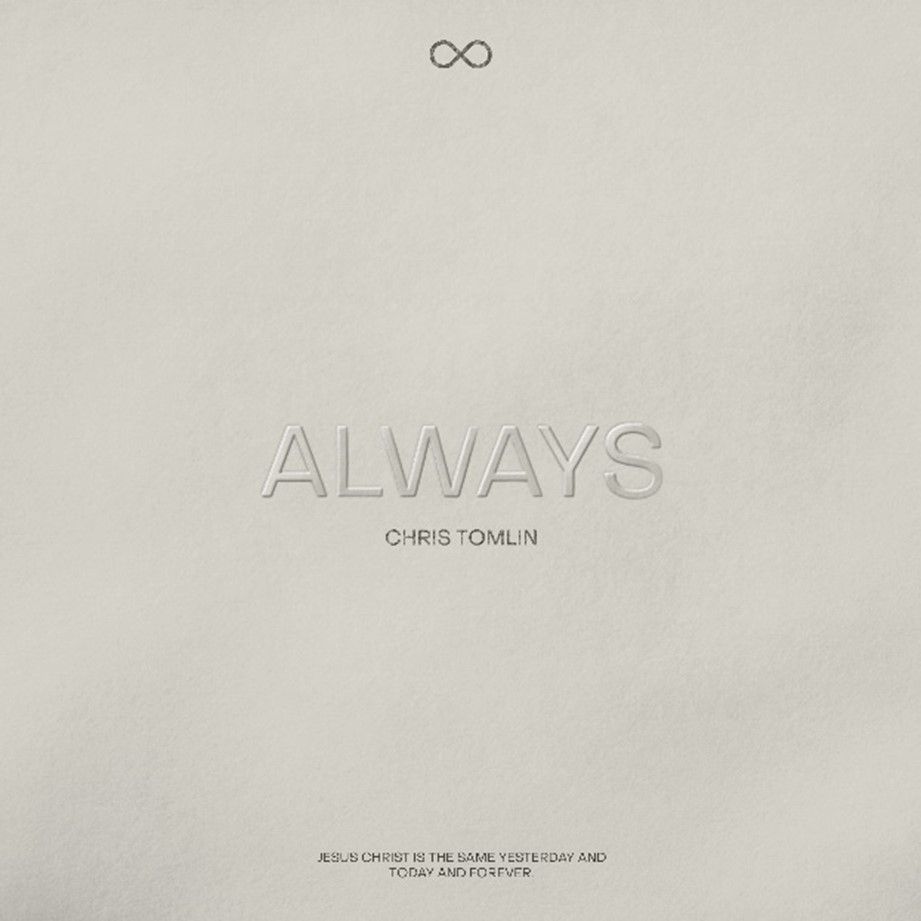 “Hebrews 13:8 says, ‘Jesus Christ is the same yesterday and today and forever,’ and that is the heart behind my new song ‘Always’ ” Tomlin shared. “The God we read about in the scriptures … the God of signs and wonders is the same God we worship today, and is the same God we put our trust in for the future."

The song “Always,” co-written by Tomlin, is uploading to Christian radio immediately and adding to radio airplay on May 13. The two-track single is available now at all digital retailers and can be found here. Watch lyric videos for each song here.

Tomlin added, “I have always tried to write songs that help give people a voice to worship God, and my prayer is that, when people hear this song, their faith is strengthened, and they are reminded of the steadfast and unchanging hope we have in God.”

“Always” follows recent single “God Who Listens,” featuring country artist Thomas Rhett, and Tomlin’s 17th No. 1 single (that reigned for six consecutive weeks) “Who You Are To Me,” co-written with and featuring Lady A. Both songs are from the 2020 “Chris Tomlin & Friends” album that debuted at No. 1 on Billboard’s Christian albums chart and No. 9 on Billboard’s top current albums chart. A companion EP was released last summer with four additional songs.

Tomlin will headline “Good Friday Nashville” on April 15 in between legs of the 20-plus city “Tomlin UNITED” tour. He will play back-to-back concerts at Red Rocks Amphitheater in Denver on May 23-24. This will be Tomlin’s fifth visit to the iconic Colorado venue, after becoming the first Christian artist to headline two consecutive nights; he repeated history in 2019. His Good Friday concert returns to Bridgestone Arena after postponing in-person shows in 2020 and 2021 due to the global pandemic. Since its inception in 2017, “GFN” has sold out each year and smashed attendance records by becoming the largest ticketed Christian concert in the history of the venue. Plans are currently in place for Tomlin to continue the Good Friday concerts indefinitely. Tickets for all concerts available at christomlin.com.

It is estimated 20-30 million people across the world sing one of Tomlin’s songs every week in church services in nearly every language. TIME magazine heralded him as the “most often sung artist in the world,” as his music has inspired and uplifted an entire generation of believers. Along the way, Tomlin has scored 17 No. 1 one singles at radio, placed 29 Top 10 hits (more than any other Christian artist), sold more than 9 million albums, with 5.2 billion career global streams. He has earned a Grammy, three Billboard Music Awards, 27 Dove Awards, became a two-time BMI Songwriter of the Year honoree and an ASCAP Songwriter of the Year. In 2016, he was named one of only four artists ever to receive the Sound Exchange Digital Radio Award for over 1 billion digital radio streams, alongside Justin Timberlake, Pitbull and Garth Brooks.